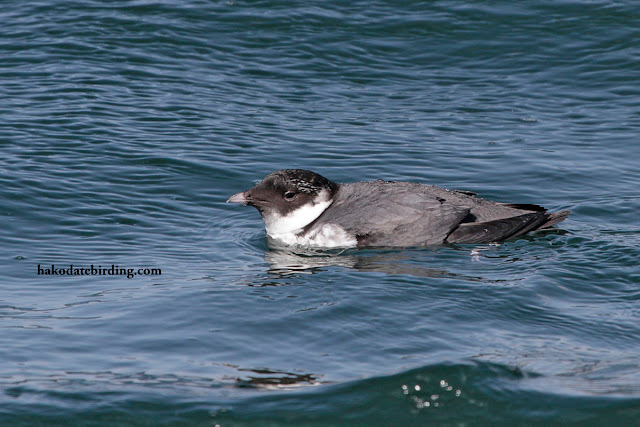 An Ancient Murrelet in Hakodate Bay this Tuesday morning. I walked down to see if the Brent Geese were still there (they were) and was surprised to see this alcid so close to the touristy area. Not really close (the pic is a fairly heavy crop) but much closer than usual. A nice find, only the second one I've seen in Hakodate. I've seen several others in various locales, late winter/early spring often sees auks visit the harbours and bays but it's usually Rhinoceros Auklets.

There was still some snow and ice around but it was sunny and windy, I'm sure that's the end of winter. A bit of a strange one, this one of 2009/10. More Hoopoes than Crossbill/Waxwings (one versus zero). No Asian Rosy Finch. No influxes of any winter passerines at all actually, not even Brambling or Bullfinch. Not a single Siskin or Redpoll and hardly any Buntings either. Where did they all go?

It was a good winter for Brent Geese though and today there was a flock of 35 in Irifune Port. They were pretty restless, I'm sure they'll be off in a day or two. They kept flying off and coming back. Nice to get some Brent BIF shots for a change. 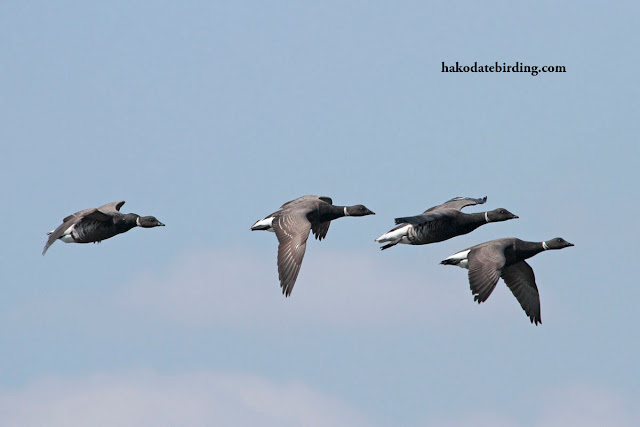 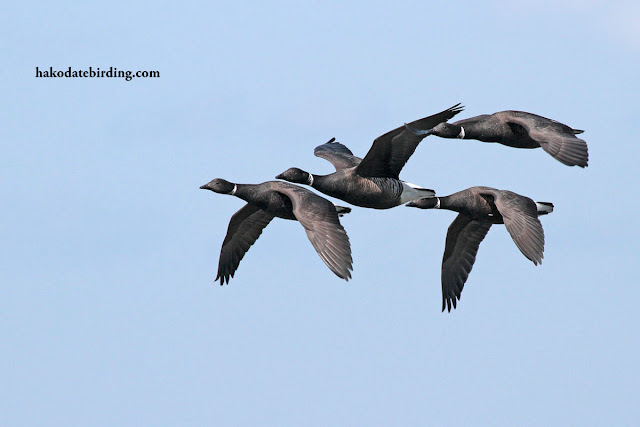 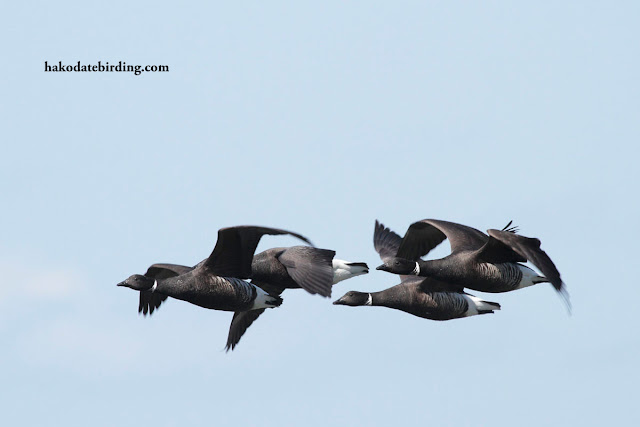 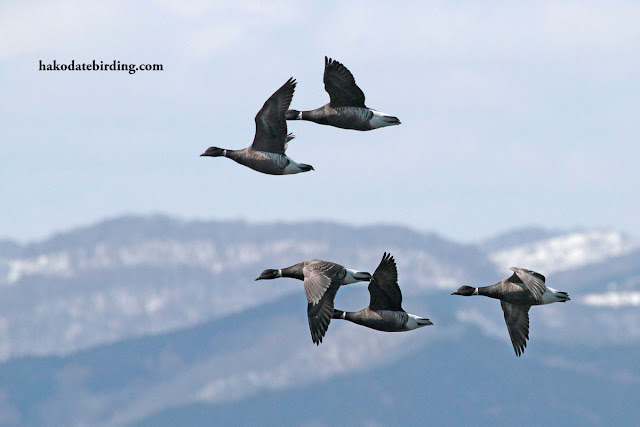 Whilst on the ground they were either strutting around squabbling or resting. 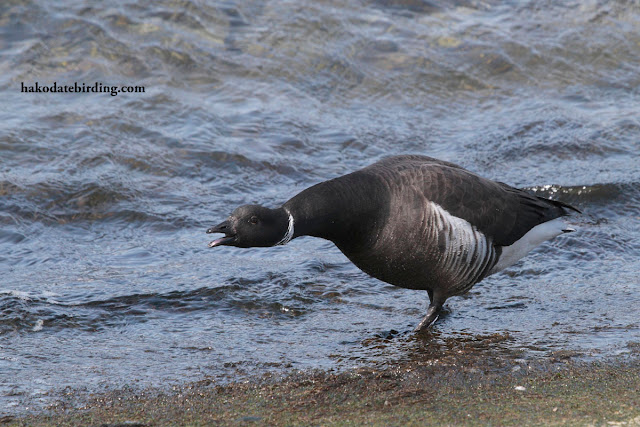 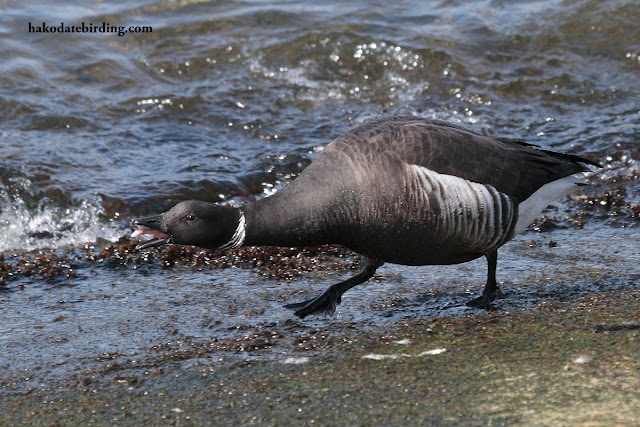 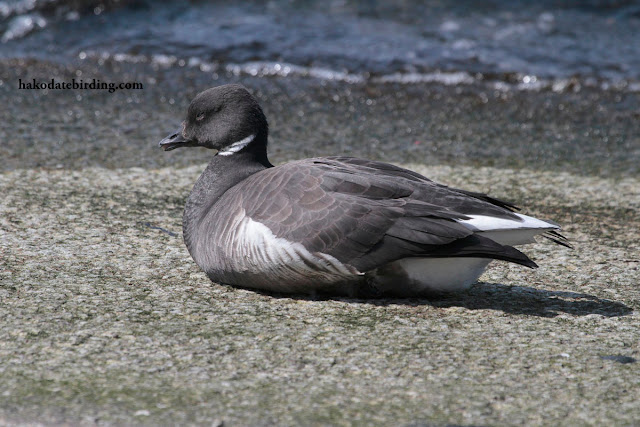 I said last week it was the last time to see them this winter but I was wrong.  I'm glad I could get back one more time. 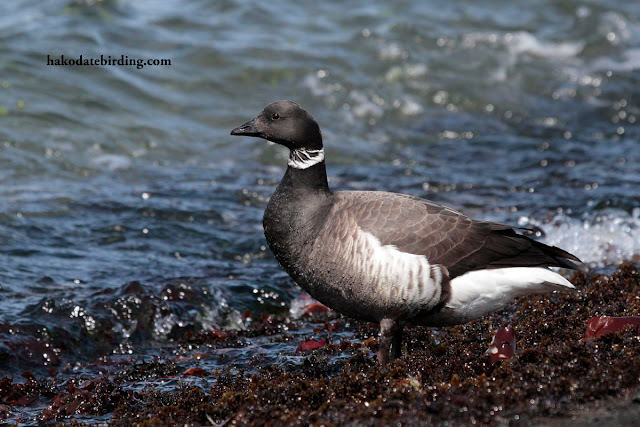 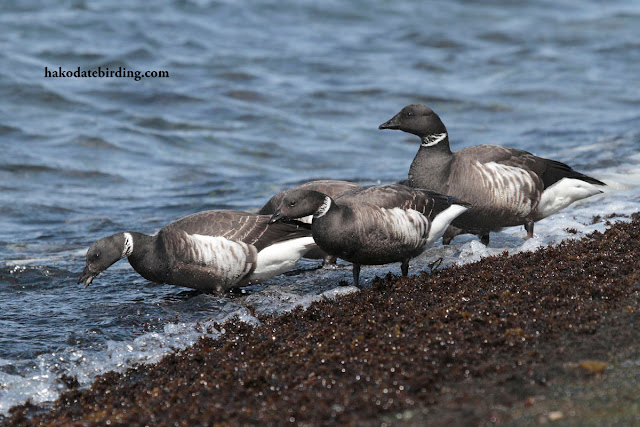 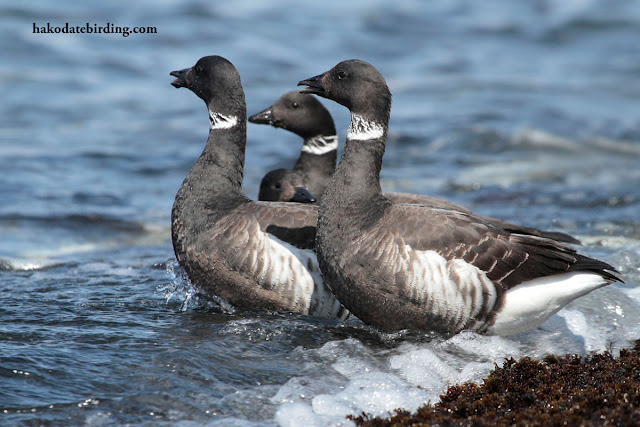 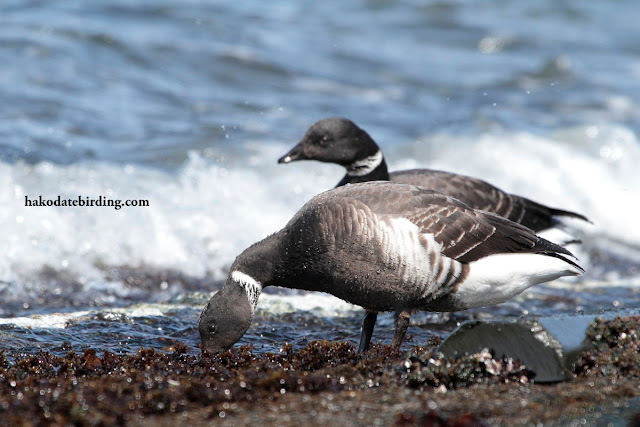 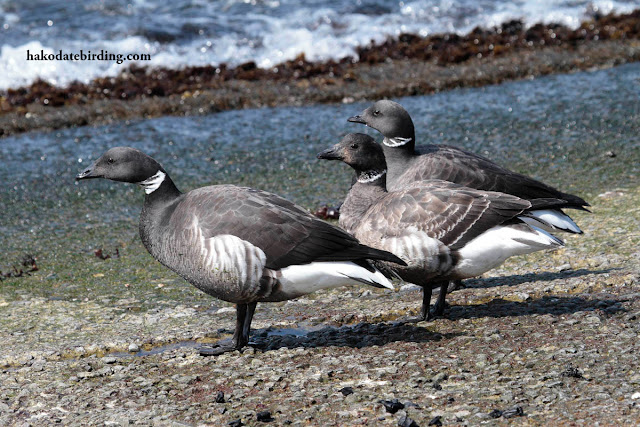 Here's a video of them preening and getting ready to depart. It was windy so the sound was brutal: I replaced it with sound effects.

I tried some Gull sound effects but it didn't sound like the local Gulls at all. See, I have some standards.

Lots of Red Breasted Merganser about, a few Goldeneye and Pintail plus the Harlequin Ducks of course (none of those species came close enough for a photo though). I tried to find the Hoopoe again but couldn't. Apparently there were a few in south Hokkaido the last week or so.

The Coot was still on the river and the usual small birds were still present. Like this Daurian Redstart. 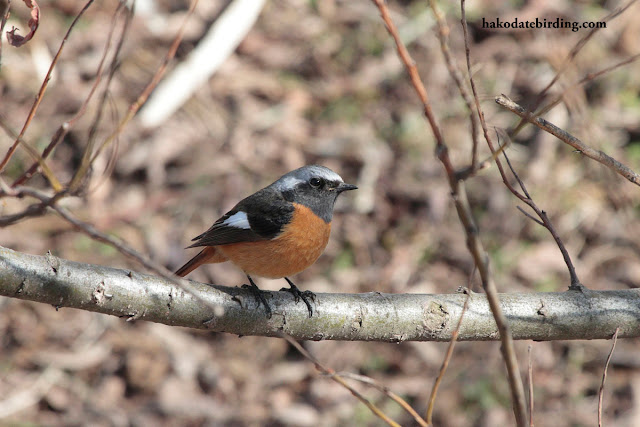 And this Dusky Thrush was from today. 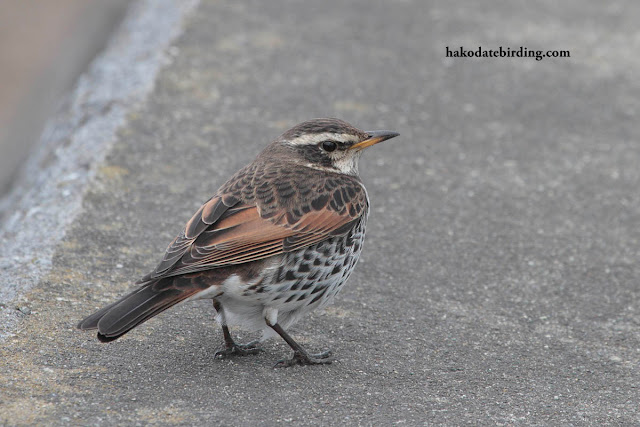 Today was a bit duller weather-wise. I noticed this duck yesterday but didn't give it a second glance, I assumed it was just a female Mallard. I took a closer look this morning though. It is, I think, a female Gadwall. This isn't so common round here, I only see one or two a year. 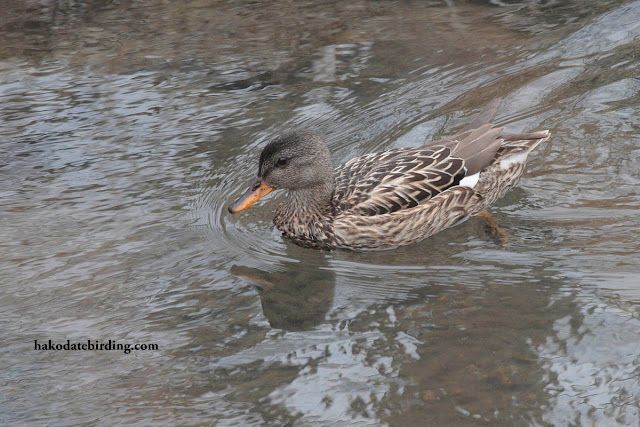 There were quite a few Gulls on the river including this individual. 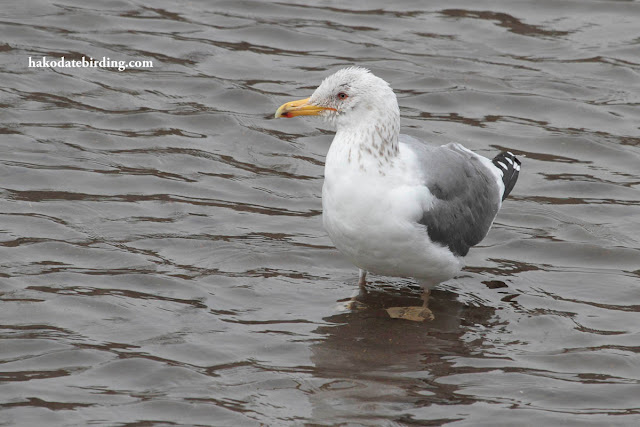 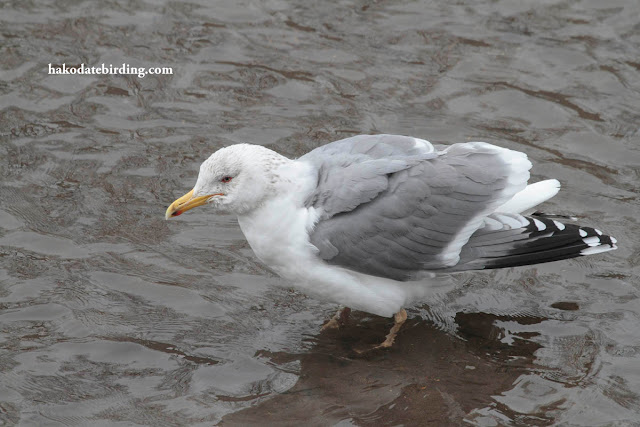 Note the leg colour (yellow). This is one of those 'taimyrensis' type Gulls. Many years ago there were 2 species of Gull. Herring Gulls and Lesser Black Backed Gulls. They were closely related and had lots of different subspecies. Now they have been split into god knows how many different full species and this is an intergrade between 2 of those. Vega Gull and Heuglins Gull to be precise.

It's darker than a regular Vega Gull, such as this one also on the river today. 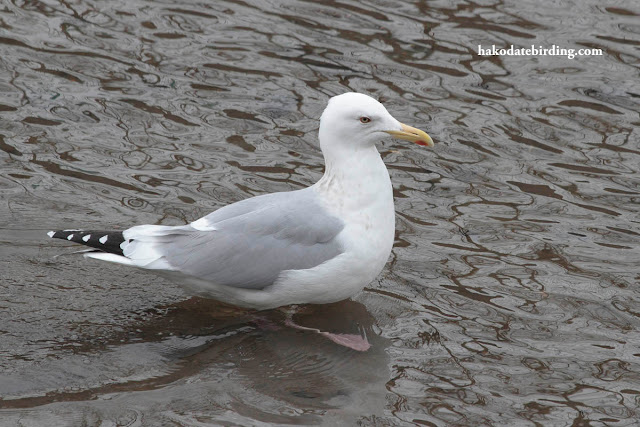 You can see our bird is clearly lighter than the resident Slaty Backed Gulls (which aren't in a complex that has been split.................yet). the Slaty Backed is the one in the foreground. 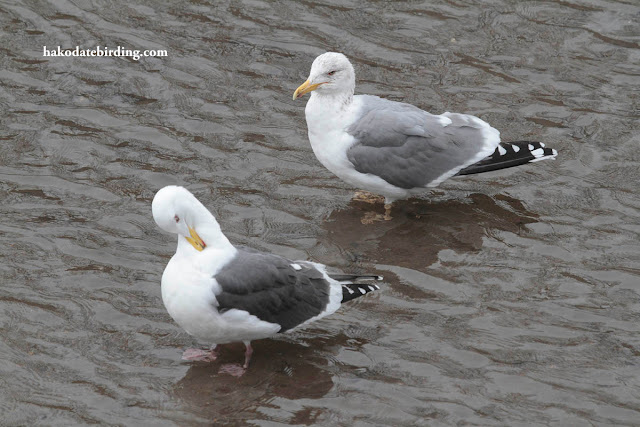 So what is it? A Heuglins Gull? A Taimiyr Gull? Soon to ID a Gull you'll need to get a blood sample and sequence its DNA.

Normally I wouldn't care about this scientific waffle but this may be important to me soon. My Hakodate local list is on 195 and I'm eyeing the 200. Stuff like this Gull (and the dodgy Crossbill from last year that I reposted recently) will test my ticking integrity in 3 or 4 species time....

I almost got a nice Long Tailed Rosefinch picture today. A male near my apartment. 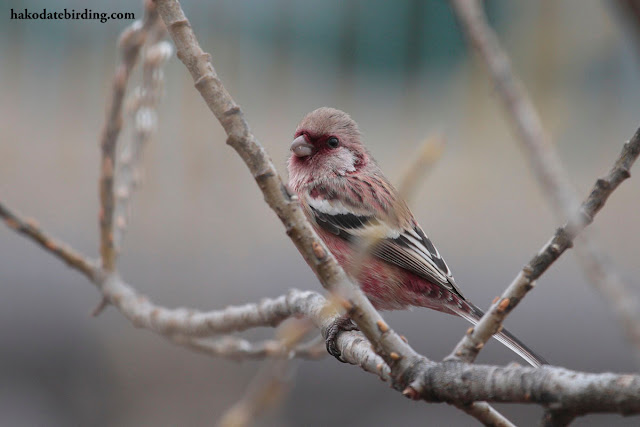 I got up to watch Bayern v Man U very early this morning. Whilst I smirked a little at the result I'm now thinking oh god Rooney is injured before a World Cup again. I hope it isn't too serious. Actually it doesn't bear thinking about. It would be a crying shame if the only mark he ever made in a World Cup was on Carvalho's groin. It might also mean England's World Cup hopes rely on someone like Carlton Cole or Darren Bent. Oh dear.

Still, let's be positive. It may only be something like 4-6 weeks out which would mean Man U's season may implode (which would be nice) and he'd be fresh and raring to go in South Africa (which would be even better).

So this weekend it'll be 3 whole weeks without a car, hopefully we'll get our hands on a nice used one next month. God I hope so.......

I noticed the first fuki shoots near my flat, a sure sigh spring has sprung.

By the way I've changed my blog name from 'S.C.E' to 'Stu'. The original stood for 'Stella C Eagle' (oh how witty) but I got tired of that so I'll just use my real name. I've changed the photo too, it's only a few months old. But by god I look cool don't I?

Click on this link if you have the time. Thanks, I appreciate your support.