A Goose for Christmas.

Joining the Whooper Swan flock at Onuma 3 years ago were 6 Geese, 2 Bean and 4 White Fronted. This is one of the latter. Flocks can be seen in spring especially but a few individuals, presumably stragglers from the main flocks further south, occur in winter.............. 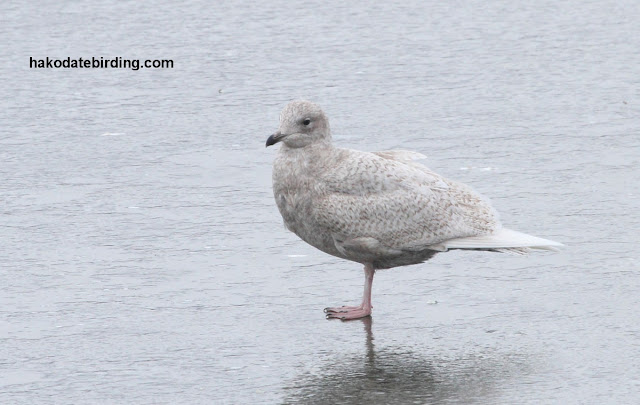 An Iceland Gull in Preston this afternoon, this well known individual has been around a while now. Notice it is on ice, Preston is as cold as I can remember it being in my lifetime and even by Hokkaido standards it's pretty damn cold.

My journey to Preston from Japan was an unmitigated disaster. I got to Amsterdam OK but on arriving to an icebound airport it became clear something was wrong when we had to wait on the runway about 2 hours as all the landing docks were occupied by frozen planes. I disembarked in time to see my connection had been cancelled and learned I would have to spend the night on the airport. I had no change of clothes and no cash. Thousands of people were milling around, no airline staff were on view anywhere. I joined the queue for the transfer desk with the thousands of others and spent the night slumped over a baggage trolley.

The next morning nothing was happening and after various rumours and wild goose chases I ended up at a gate that had a plane going to Manchester, me and hundreds of others. KLM gave priority for those with tickets for that flight and it was basically bad luck to all of the rest of us who had been waiting up to 24 hours. Things got pretty ugly at that point and the airline staff had to call security, eventually common sense prevailed and we got on the next flight. I had spent 48 hours with no sleep and no change of clothes when I finally got to Manchester to find my luggage was not there. I filled out a form and left the airport, in the chaotic scenes I didn't get a receipt and had to call later for a reference number to track my bag. KLM, the f**kwits, rather than sending my bags on the next flight to Manchester decided to send it via Paris and Bristol and 4 days later it still hasn't arrived. So I have hardly any clothes to wear and no christmas presents to give anyone. Oh and I just caught a cold too.

At least the Iceland Gull was still around.
10 comments:


Ural Owl at Omuma. This was a digiscoped shot, just after I'd finally got a decent tripod. Shutter speed was exactly 1 second!


This is one of 3 Owl holes we know, this particular location is very close to the road. Other Owls have used it since (or is it still the same individual?).

Nearer home there were 10 or so pairs of Oriental Reed Warblers with their loud noisy songs.

The Red Cheeked Starlings eggs must have hatched in late June, this led to a feeding frenzy.

Over at Shikabe we found a good place to photograph Japanese Green Pigeon as they came down to the sea to drink saltwater..................

Highlight of the summer for me was a pelagic trip off Tomakomai in August resulting in lots of new birds for me and a nice chance for some albatross pics. These are Black Footed Albatross.

The wader season started in early August with these Sanderling up at Oshamanbe.

And Ruddy Turnstone too.

The beach at Kamiiso also proved to be a good spot for waders.

Grey Tailed Tattler were everywhere, this individual was at Shikabe.

After the wader season there is always a bit of a lull. October is great for birdwatching and usually has interesting birds but some reason I never get good photos of them. The only real photo opps are of the Night Herons.............

The end of the year was a little quiet due to my back injury, these Japanese Waxwing from a couple of weeks ago were the highlight...........

And here's a video compilation I made from 2010. Not a masterpiece of course but it gives you a flavour of the local birds at least..........

I'm heading back to England today, that'll be a bit weird. I haven't been back for a while and in my semi-crippled state it'll be a bit surreal.

The year has kind of petered out thanks to my slipped disk but it was a pretty good year for birds. I got 11 new species on my Japanese list (up to 249, I think anyway) and half a dozen or so on my Hakodate list (running at 197 now I think). I don't really do any twitching, theer's no grapevine here plus of course I can't even drive.

I'm still missing several species that everyone else around here seems to see; Snow Bunting, Hazel Grouse and Rough Legged Buzzard for example. Hopefully I can see these in 2011 and many more besides.

2010 was crap for Liverpool and England in the footy, I'm getting immune to the pain as I grow older. At least the cricket appears to be going OK..........

Thanks to everyone who checks this blog, I appreciate your comments and the fact you make time to look at my pics and to in some cases read my moaning about aches and pains and personal ongoing war with construction noise.
7 comments:


A regular winter visitor, this species sometimes hunts in the town, I've even seen it from my living room window.........

Labels: Merlin
Email ThisBlogThis!Share to TwitterShare to FacebookShare to Pinterest 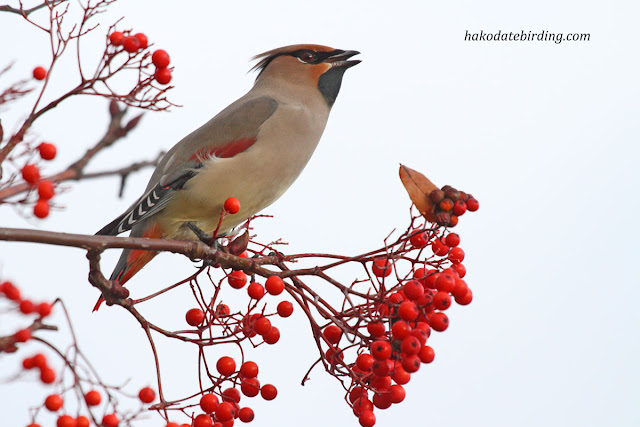 There seems to have been an influx of Japanese Waxwing in south Hokkaido. The flock in the park near my flat increased to 9 and I saw 2 other (larger) flocks on the outskirts of town yesterday. These pics are from Friday. 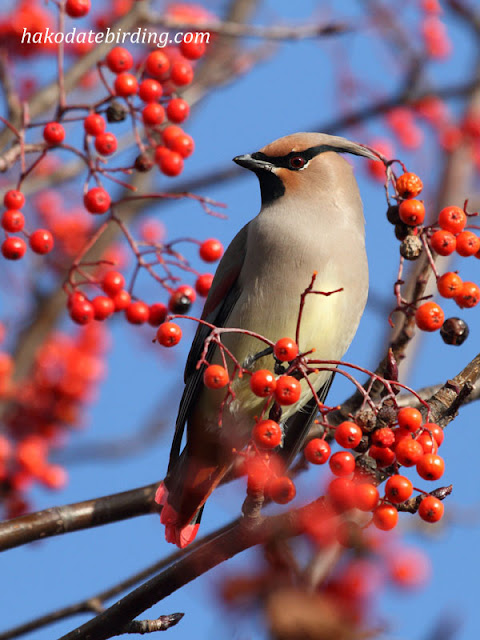 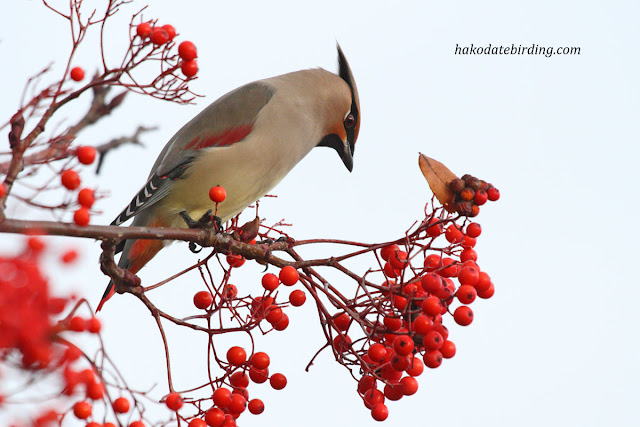 Looks like I'm stuck with a gammy leg for the next few weeks, I'll try to stop moaning about it.
No Bohemian Waxwings at all, hopefully they'll hit town when I return in January............ 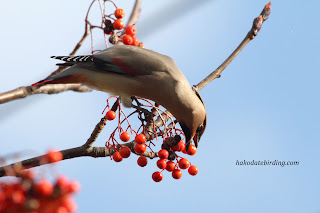 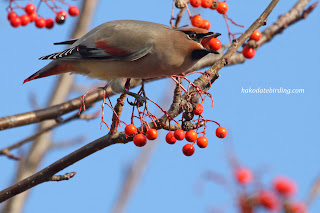 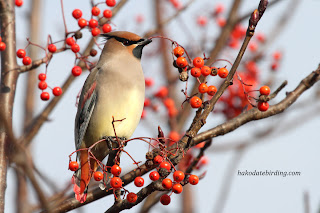 Yesterday saw winter hit Hakodate at last. In Ono there was a huge flock of Rook with a few Daurian Jackdaw and in Kamiiso we found this adult White Tailed Eagle. 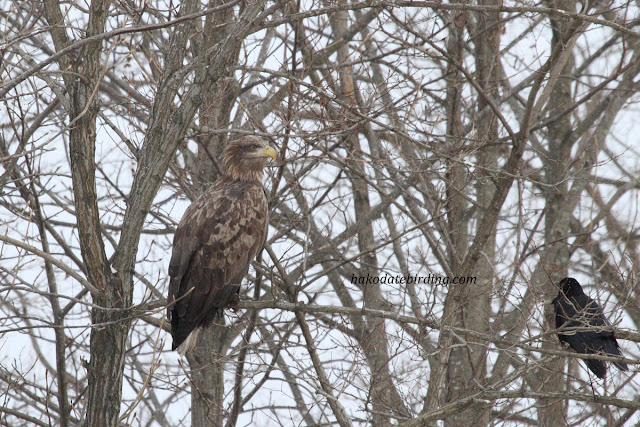 This individual appears every winter in the same spot.

We went to Onuma and the snow was pretty heavy. It was also very dark. I spent an hour or so withe the tame Tits and Nuthatches. 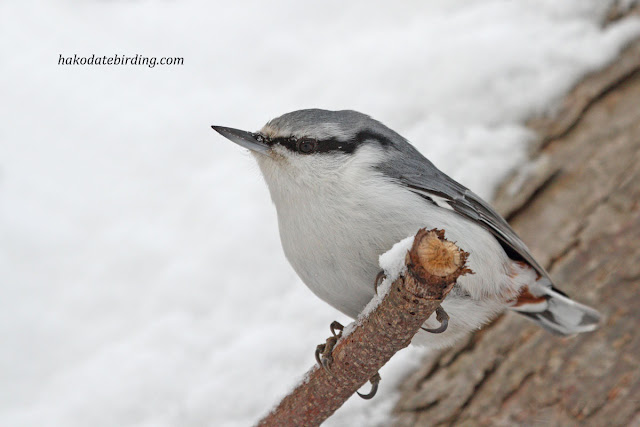 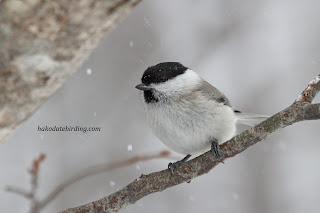 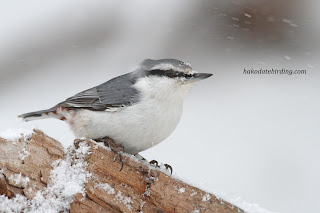 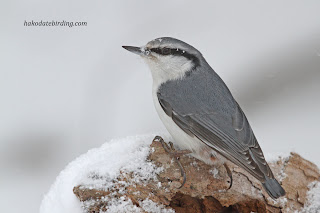 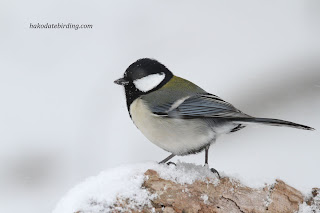 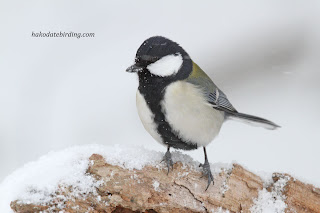 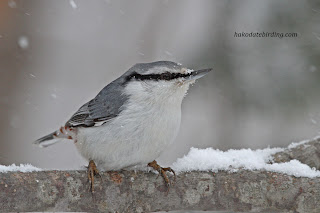