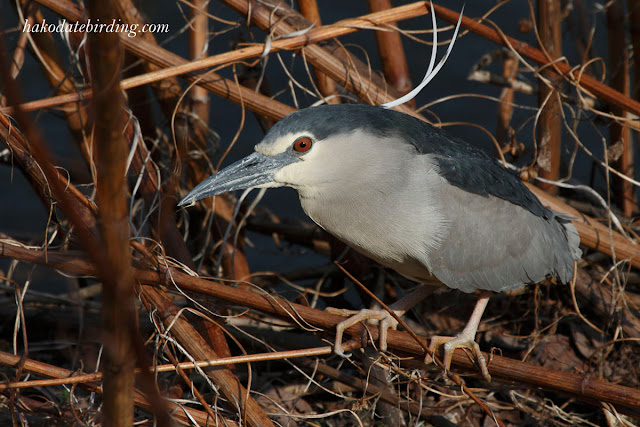 A Black Crowned Night Heron on the river near my flat this afternoon, presumably a new arrival.

Today saw bright mild spring weather and in the morning I went down to the nearest quayside (about 25 minutes on foot) to see if anything interesting was on the sea. Last week's Black Throated Diver was still around. 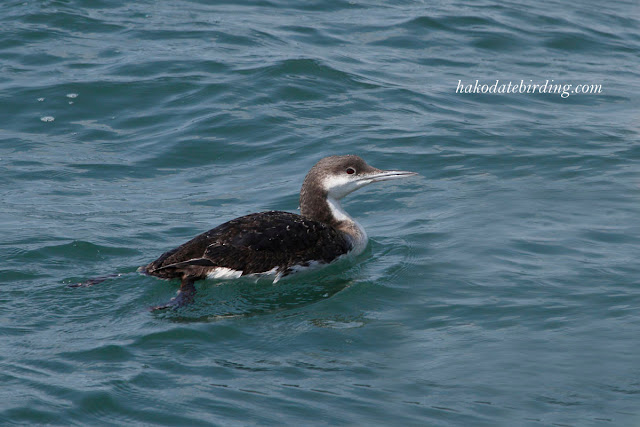 It wasn't as confiding as last week. Whilst I was waiting for it to come closer I noticed what appeared to be a little penguin just a few metres off the harbourside. 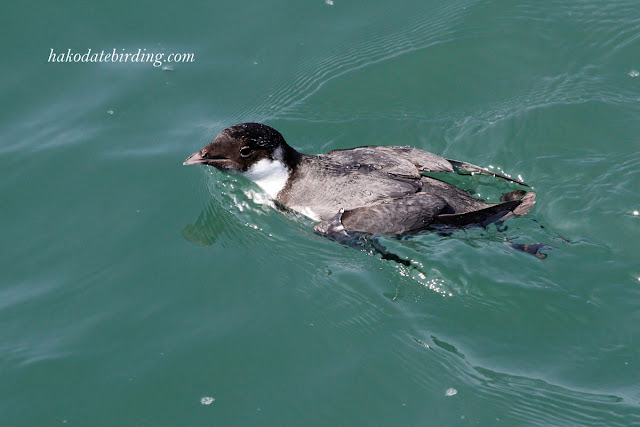 It was another Ancient Murrelet, my third sighting in Hakodate in the last 5 months. You have to admit it's cute. 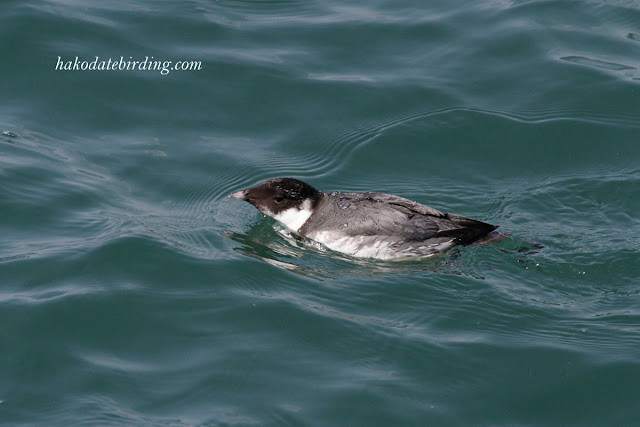 It was very active, diving all the time. 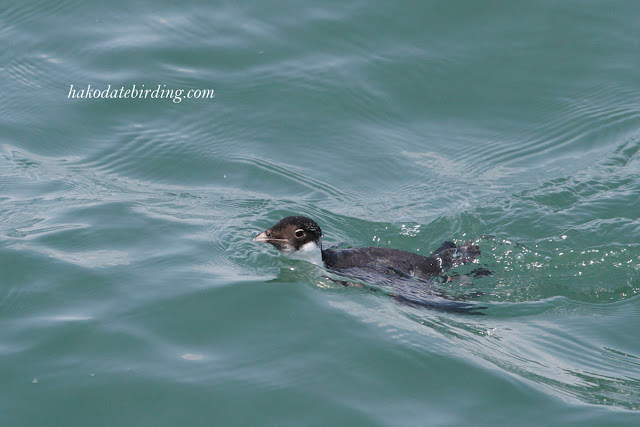 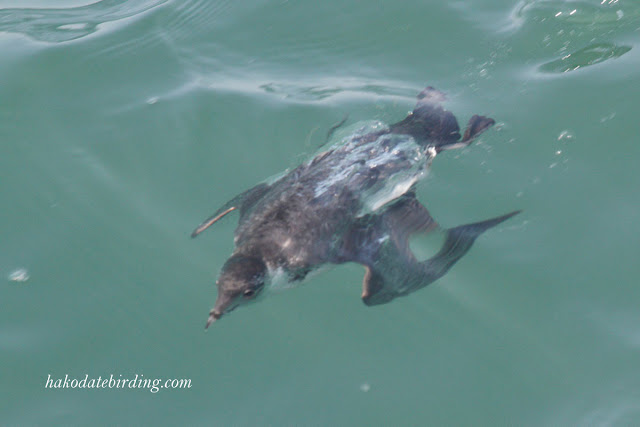 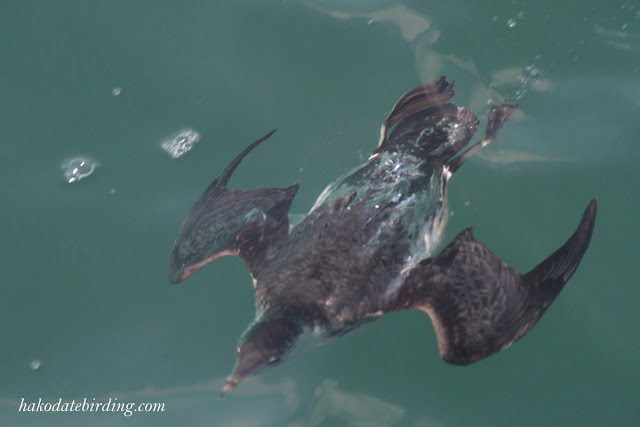 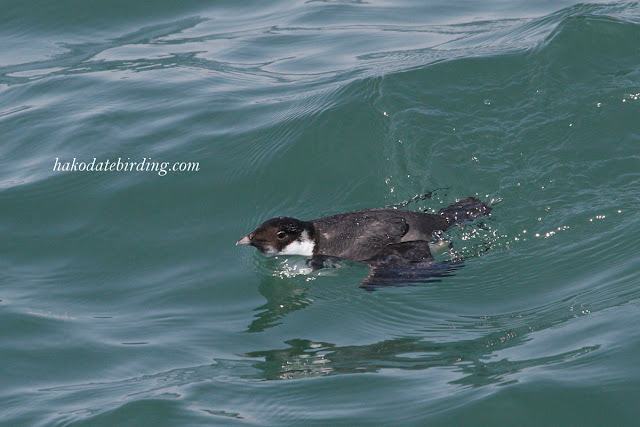 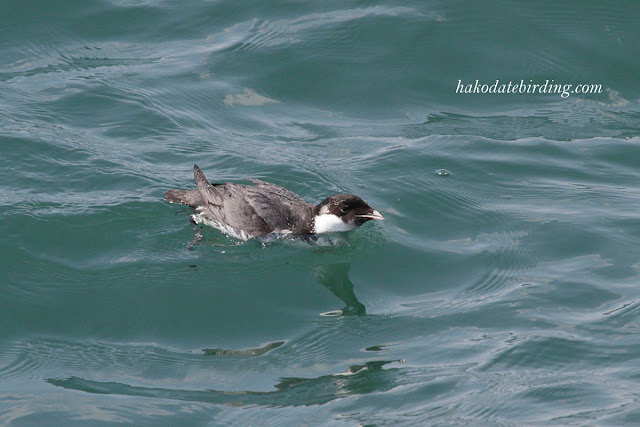 Other stuff on the sea included Red Necked Grebe, Red Breasted Merganser, Scaup plus both Temincks and Pelagic Cormorant.

A long way out there was an Osprey fishing, here are 2 very heavily cropped images (almost 100% crops in fact). 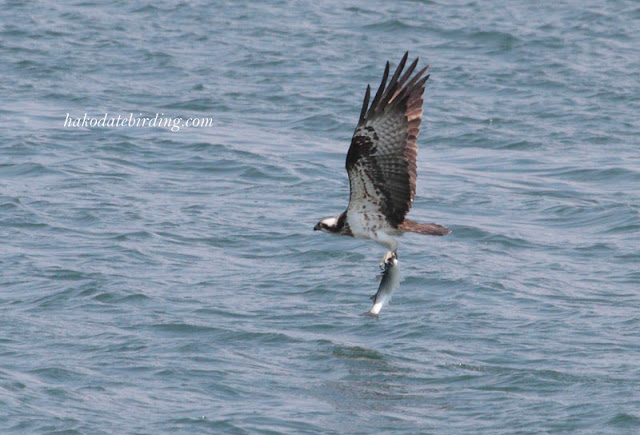 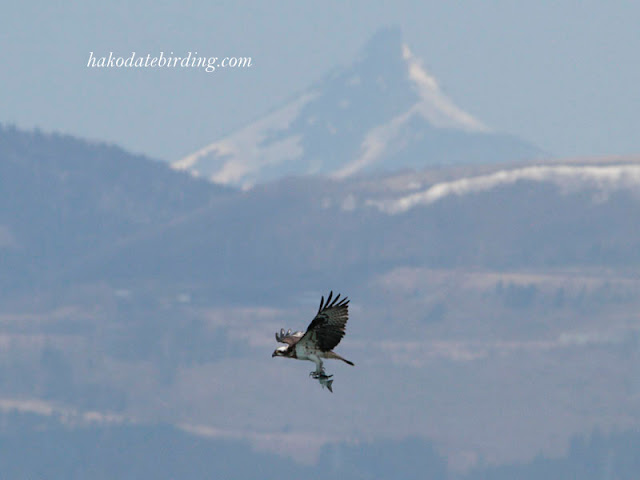 If today was springlike yesterday most certainly wasn't. I met a nice couple from Colorado, Wayne and Laura, who were passing through Hakodate on a Cruise Liner and had a few hours to stretch their legs onshore. We met at Cape Tachi-Machi and had a walk through the forest at the foot of Mt Hakodate. There were frequent snow flurries and there was a bitingly cold wind. The usual resident Tits and Woodpeckers were around including a female Grey Headed Woodpecker, the first I'd seen in Hakodate for a few years. Due to the nasty weather there weren't so many birds in the forest although we did hear the first singing Japanese Bush Warblers of the spring.

Down in Yachigashira Port I was surprised to find a group of 9 Brent Geese. I thought they would have gone by now, apparently not. 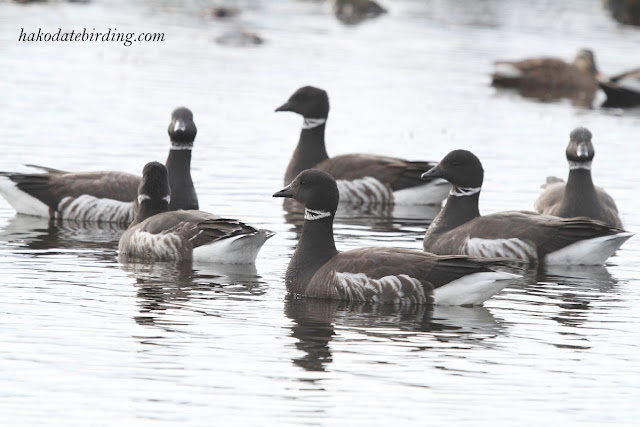 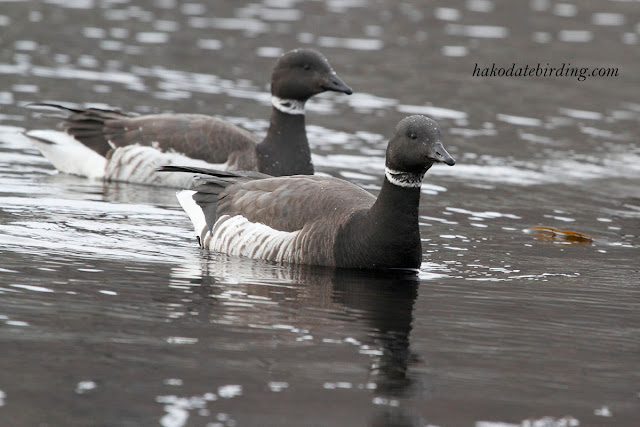 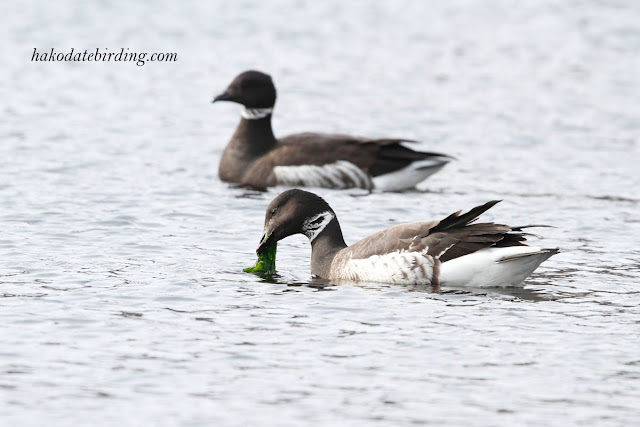 The light wasn't great yesterday, apart from the green seaweed these could almost be monochrome...... 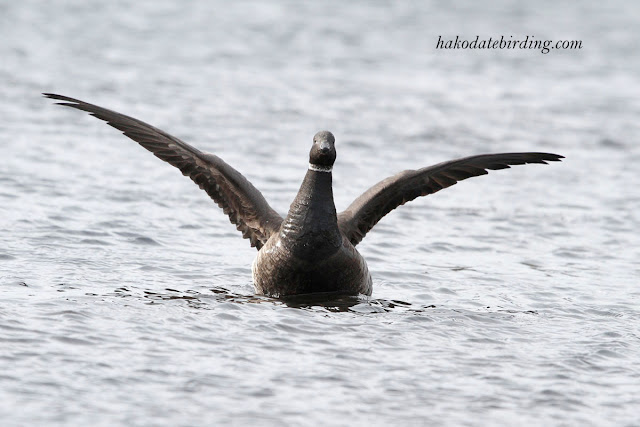 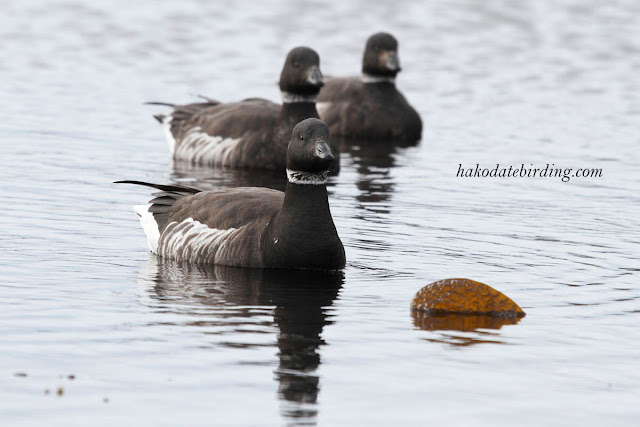 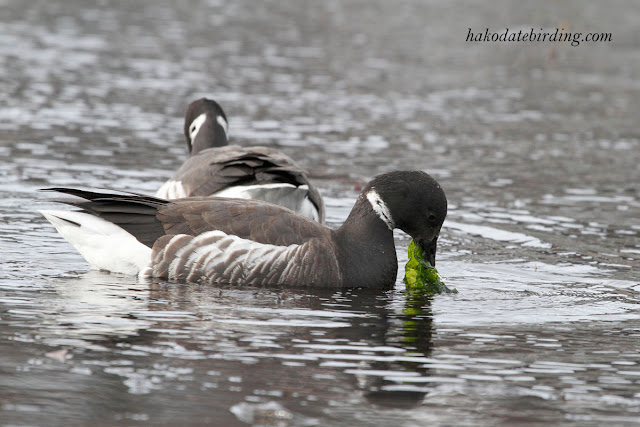 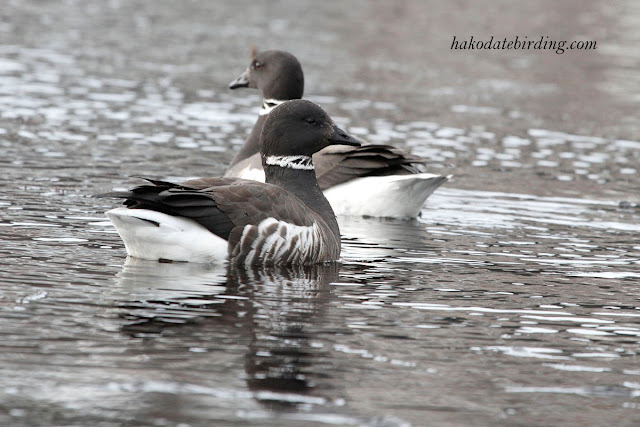 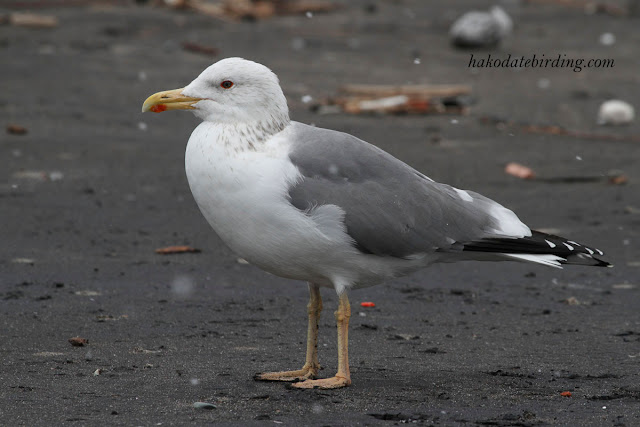 The Night Heron was a nice find today, out in the open in good light for a change. 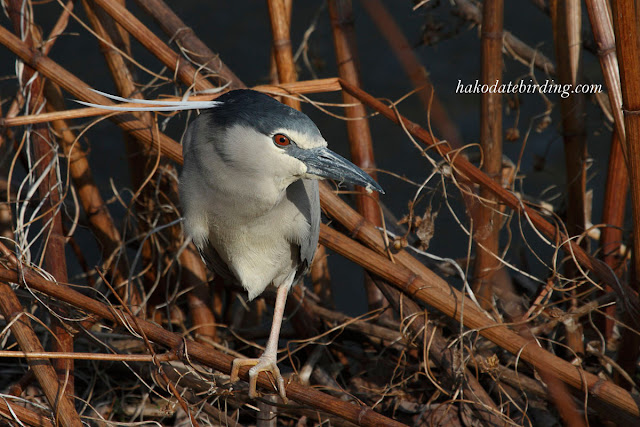 It flew off pretty quickly though. Shame about the scaffolding in this hot. Damn construction is everywhere. 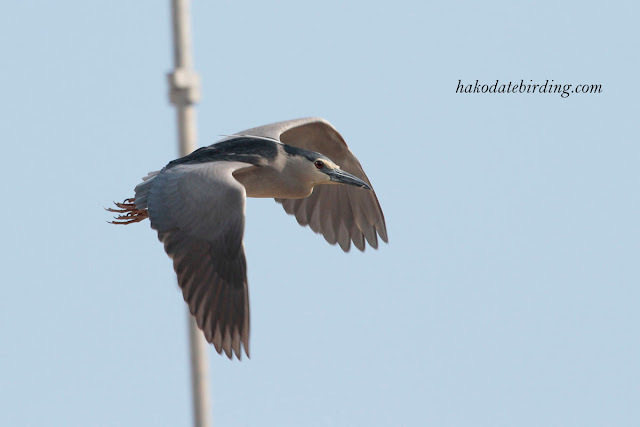 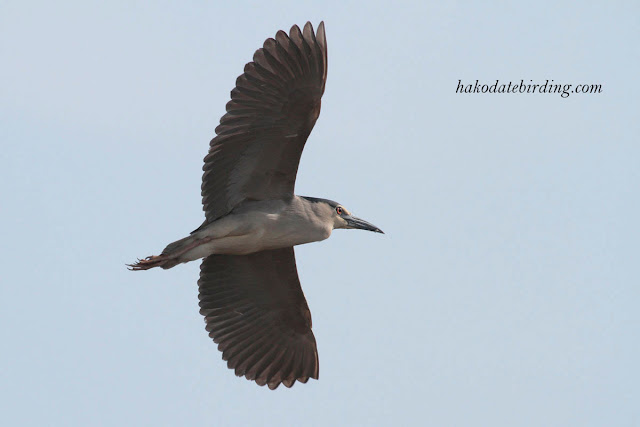 Flying Night Herons were my first ever shots with the 7D: we have come full circle.

Big weekend of footy coming up, I've given up on Liverpool's 4th place chances so I'll just sit back and enjoy the Manc derby and Spurs v Chelsea.

I lived in North London for 2 or 3 years back in the early 90's. Most of that time was in Arsenal territory (in fact at one stage I lived about 100 metres from their old Highbury ground) but I always had a soft spot for Spurs. One of my co-workers was a big Spurs fan who had connections at White Hart Lane and I sometimes went to games and even went to the Players Bar a couple of times (I saw an injured Gazza drinking with his mates one time).

The only north London derby I saw was one at Highbury when Spurs won 3-0. It was before an FA Cup game so George Graham put out a reserve side and the Spurs fans I was with went crazy........... if you're a Spurs fan a win is a win. I watched the second half of Wednesday's game, it isn't often Spurs beat Arsenal.

It isn't often Liverpool have beaten anyone this season.

We have a new car! Let's hope the nice weather continues until Sunday (I'm busy tomorrow). The forecast is for rain but weather forecasters are sometimes as accurate as those 'experts' who said  Liverpool would win the League this season.

Thanks for clicking on this link.