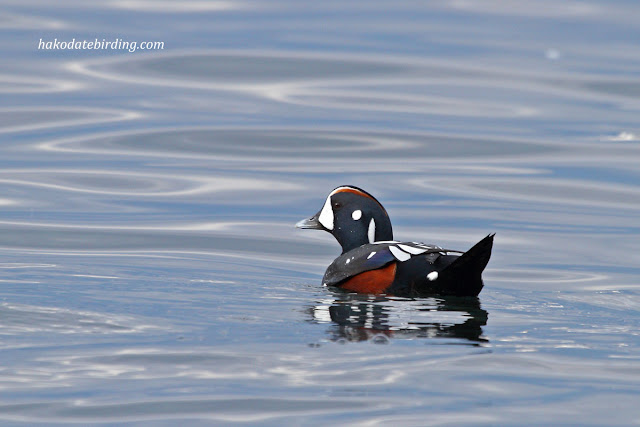 I took a long walk down to Irifune this morning to see the Harlequin Ducks that gather there outside the breeding season. There were plenty around. 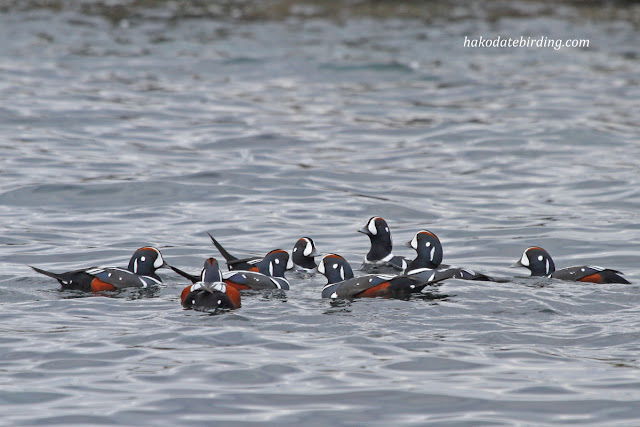 Last year I got a few nice shots as the birds came a lot closer than they did today. It was still a nice way to spend my day off watching them dive for crabs and squabble amongst themselves.

I still find them very hard to photograph. They have very high contrast plumage that needs very soft light, unfortunately today was either a little dark or too bright and to be honest most of these pics look a little overprocessed as I attempted to rescue them. 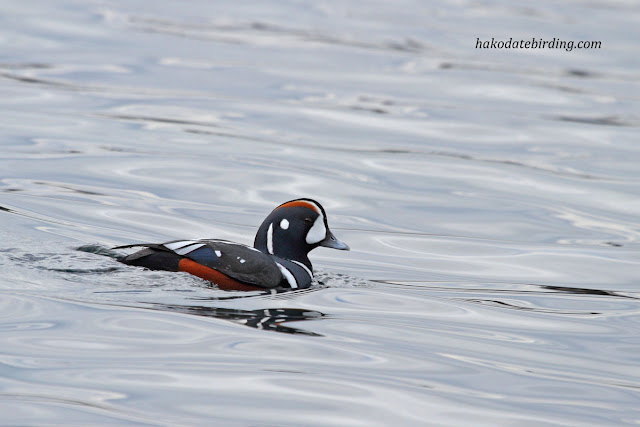 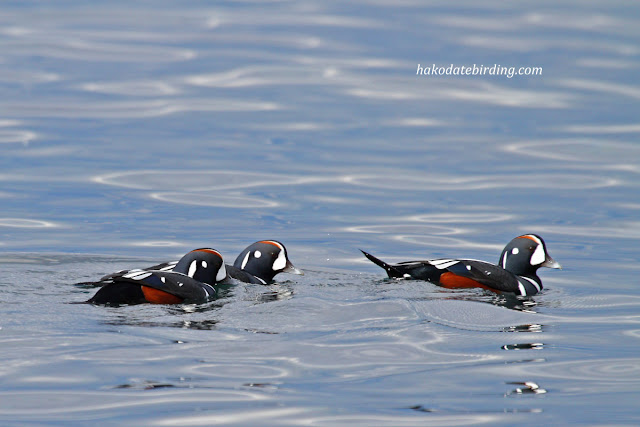 The best place to see them is a very secluded fishing port where I can sit on the concrete edge waiting for them to swim by. Only a few gnarled old fisher folk around, normally older Japanese people openly stare at foreigners but these salty old folk didn't stare, I said hello to one of them and got a monosyllabic grunt in return. 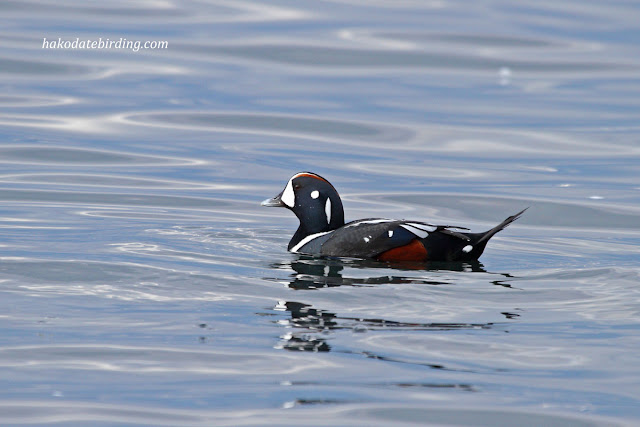 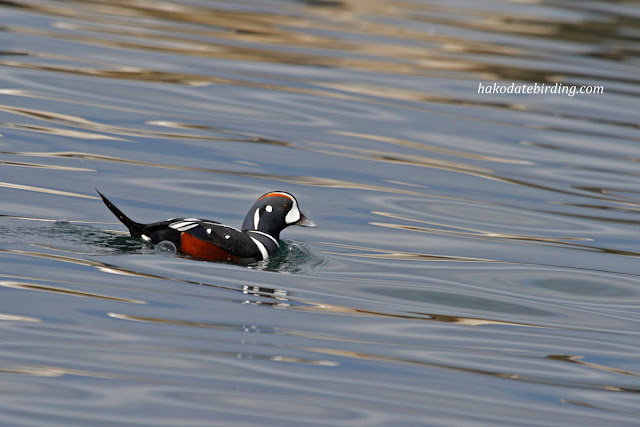 Also in the same area was the first Brent Goose of the season, just one individual so far. 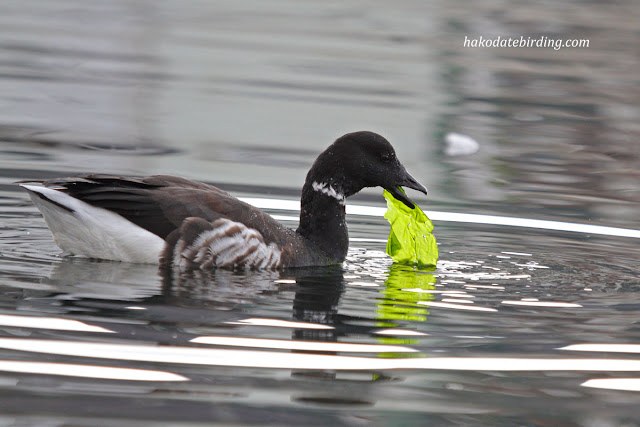 There were several Pelagic Cormorant around, a Red Necked Grebe, Wigeon and Goldeneye. A Peregrine swooped low over the port chasing some Bulbuls but I couldn't get my camera on it in time.

Lots of Waxwings reported in Hokkaido this last week or so. Both species too, Japanese and Bohemian. I did see a small flock of 10 or so Japanese Waxwings but they flew off before I could take a photo. There are loads of berries everywhere in town, they'll turn up in numbers soon I hope.

Other stuff around my apartment this week has included Rustic Bunting, Hawfinch, Daurian Redstart, Wren, Brown Dipper, Great, Coal and Varied Tits and a female Sparrowhawk. 3 species of Heron too. Grey Heron of course, 2 immature Black Crowned Night Herons are still skulking around and there was also this Great Egret. 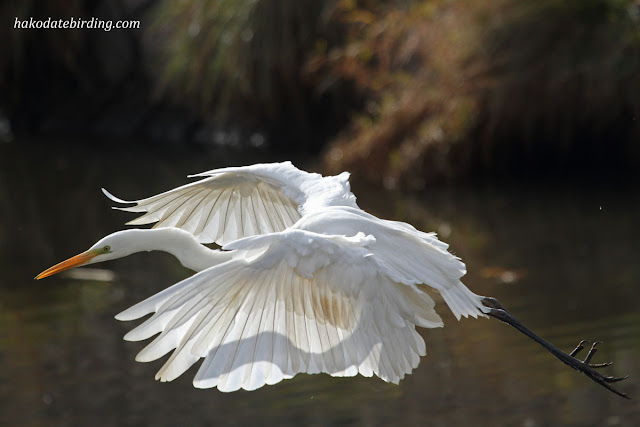 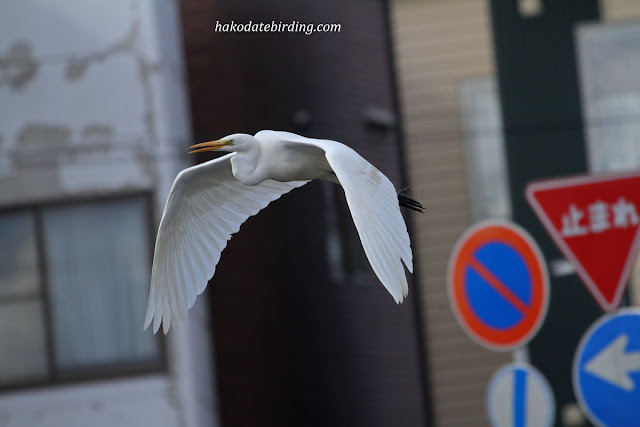 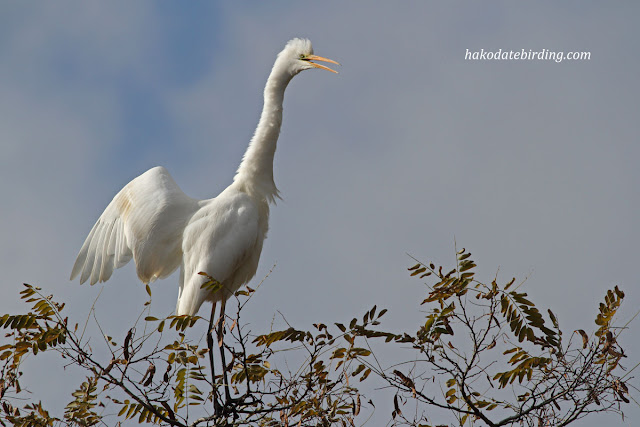 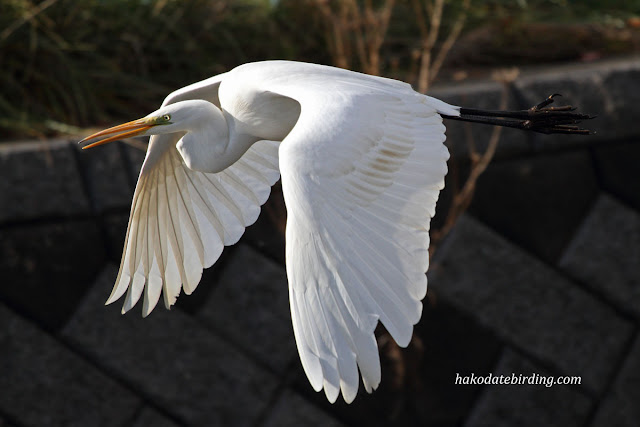 Another new construction project has begun, this one is also less than 50 yards from my window. I'll stop writing about it because I don't want to be negative but my direct quote when they started baging and hammering away was something along the lines of J**s*s f******g h**l b*****ds m******f*****s....................and a couple of oyajis were ominously surveying the road this afternoon too. Don't tell me they're going to rip it up and build a new one?

I really need a break from Japan, luckily in exactly 4 weeks I'll be flying back to the UK for a 3 week holiday. If there is loud construction work in Penwortham near my parents' house I will know I am officially cursed and am being punished for sins committed in a previous life.

England lost against France. So what? Meaningless friendly as it was I didn't bother getting up to watch it. I'm sure England will canter through to Euro 2012 and crash out to the first decent side they play, it's inevitable so why bother fighting it?