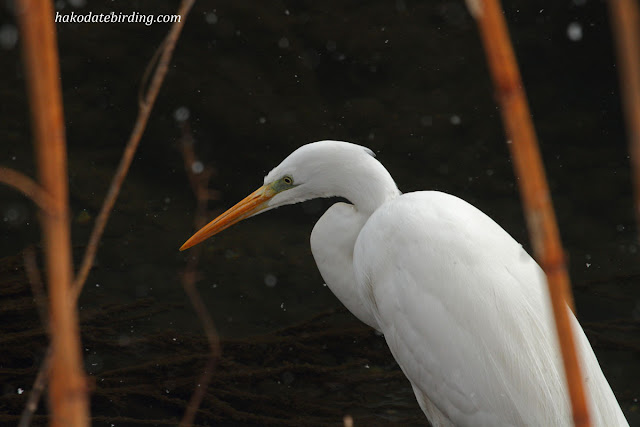 On Sunday the wind direction changed and it became unexpectedly mild and it even rained. Unfortunately subzero temperatures soon returned and the slush from a couple of days ago has now become glassy ice and it is horrible to walk on even with spikes.

I was watching the above unusually confiding Great Egret near my apartment, it looked like it was just going to do something interesting when it was disturbed by an old man who threw away blocks of ice he'd been chipping away at in front of his house next to the river. I watched in horror as he threw the slabs of ice over the railings at the side of the river, the egret flew off. 'F**king hell" I shouted in English, the old man nodded sheepishly (to be fair he didn't know the egret was there but the silly old bastard must have known I was photographing something).

Not much else around, small groups of Dusky Thrush and Grey Starling (but no Waxwings yet), 6 species of duck including Goosander, a lone male Daurian Redstart, a Grey Heron: that's about it. On Sunday there were 2 adult White Tailed Eagle and some Black Necked Grebe in Kamiiso but the weather was so bad photography was impossible.

I've given up on Liverpool finishing in the top 4 though at least Arsenal and Chelsea are struggling too, you never know.