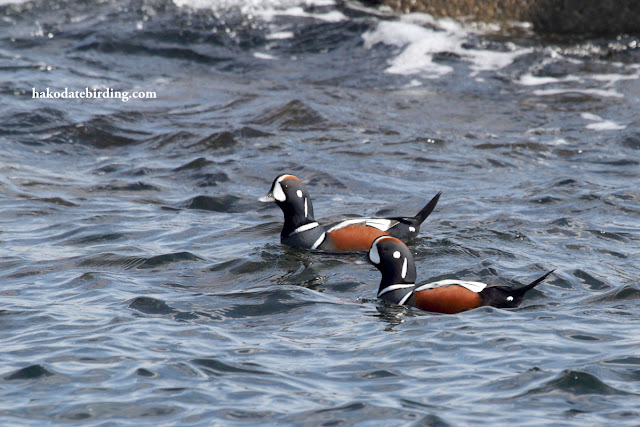 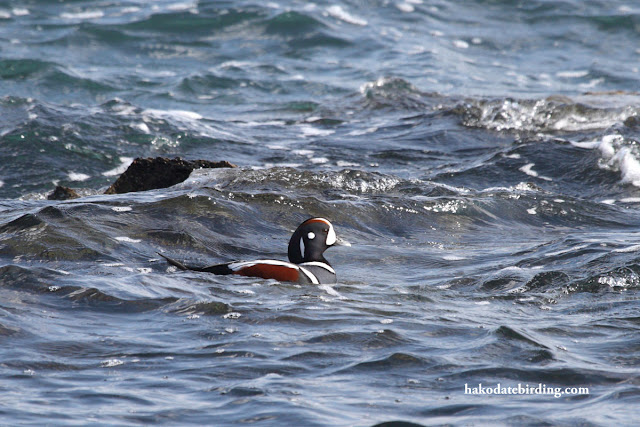 The Harlequin Ducks have returned for the winter, these pics were from near Menagawa, a few km to the east of Hakodate. This is a common winter visitor but is difficult to photograph as they are always just that little bit too far away. I come to this same place every autumn with the usual so-so results.........

There were also several Temincks Cormorant nearby. 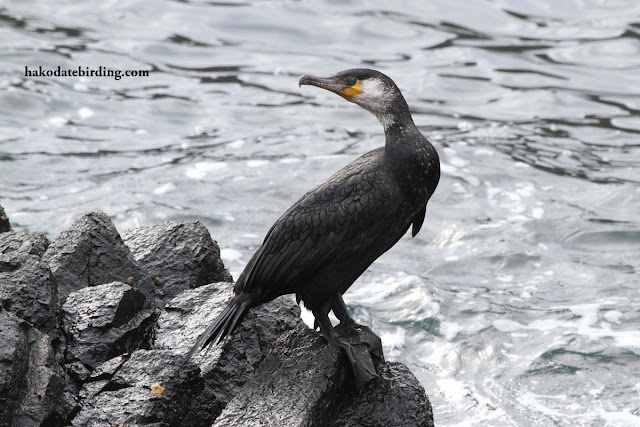 Back in Hakodate the bird of the week was one I didn't even see let alone photograph. I took a walk down the local river, along the beach and ended up in the forest at the base of Mt Hakodate. The usual suspects were on the river. 5 species of duck included a female Wigeon and there was also a lone Coot (not a common bird here). Various unidentified stuff was flitting around in the bushes. Oh and the Night Herons of course. 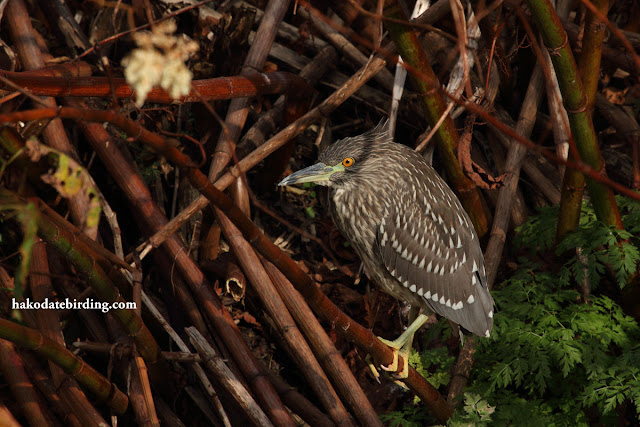 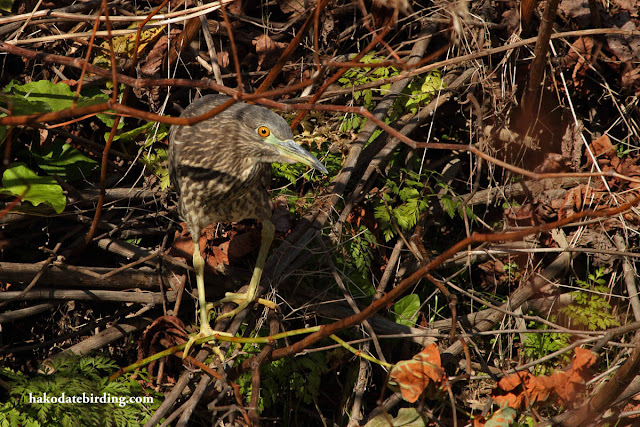 On the beach the resident Slaty Backed and Black Tailed Gulls were joined by lots of individuals with pale backs. When I first came to Japan and had an ancient fieldguide these were known simply as Herring Gulls. A little later those in the know have labelled them Vega Gulls (or sometimes East Siberian Gull). 'Herring' Gulls have been spilt into various species across the world and several of these splits occur in Japan. Vega are by far the commonest. I think this is a typical one in winter plumage. 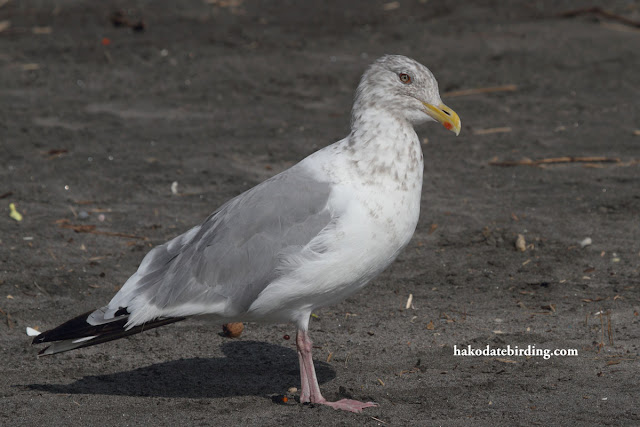 This one seems to have slightly yellowish legs. Individuals with yellow legs are sometimes known as 'taimyrensis' types which are either a) a subspecies of another split species known as Heuglins Gull or b) a hybrid of Heuglins and Vega. WTF is all I can say. I don't even know if this is one of those 'taimyrensis' types or not. 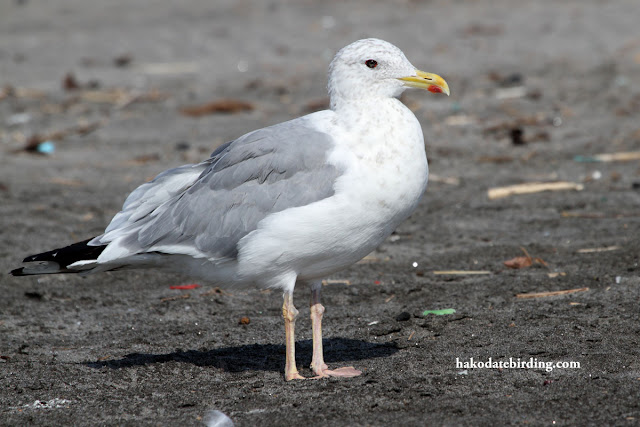 And this one has a completely different head shape. 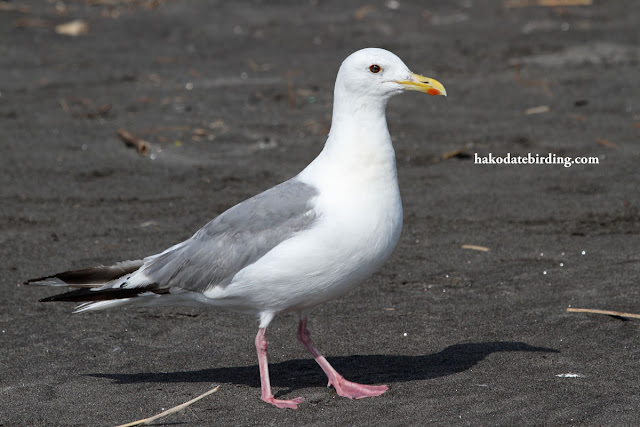 I know Gulls are highly variable even within species. There were several other odd looking individuals scattered around. They obviously can't all be vagrants, perhaps all of 'em are just Vega Gulls. I give up. For now.

This Blue Rock Thrush was easy to ID at least. 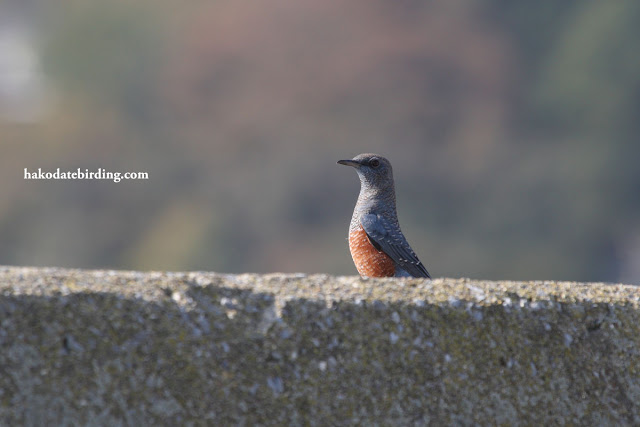 The forest at the foot of Mt Hakodate was full of birds. Japanese Bush Warblers and White-eyes were abundant. The resident Tits and Nuthatches were everywhere and some of the more interesting stuff included Grey Bunting. A female White Backed Woodpecker was a nice find and i was very surprised to hear a Black Woodpecker calling. I am deeply familiar with this sound after chasing them around the woods in Onuma the last 3 years.

This one was in an area of the forest that I always thought looked perfect for Black Woodpecker. The other 4 local species are there (although I haven't seen a Grey Headed in Hakodate for several years). Unfortunately I couldn't find the Black Woodpecker, it was very close but it just didn't want to be found (the forest is still overgrown enough for birds to hide in). I climbed up the hill off the trail to try and find it but got nothing except mosquito bites on my face (what are they still doing here in mid October? Global warming eh?).

I hope I can find that Black Woodpecker in the next few weeks before the snow comes and closes the trails in the forest. It took me ages to see my first one at Onuma and then I started seeing loads of them. I wonder if they've been on Mt Hakodate all along? Surely not, I'm sure I would have seen or heard them, I've been birding there on and off for 9 or so years and I can't be that incompetent. Can I?

They do occur on the outskirts of town though. And because I count 'heards only' on my local list it's a new addition to my Hakodate list which must be around 188 or 189 now, can't remember exactly to be honest.

Here's one of the local turtles. 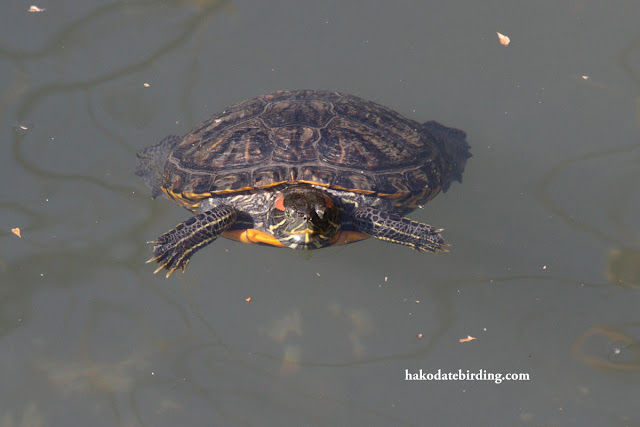 I have 'In the Loop' primed and ready to watch.

So Liverpool's title challenge is over before the clocks change. I didn't see last night's loss to Sunderland but god almighty to lose a game with a deflection from a balloon................... how annoying is that?