Geese and a TV debacle 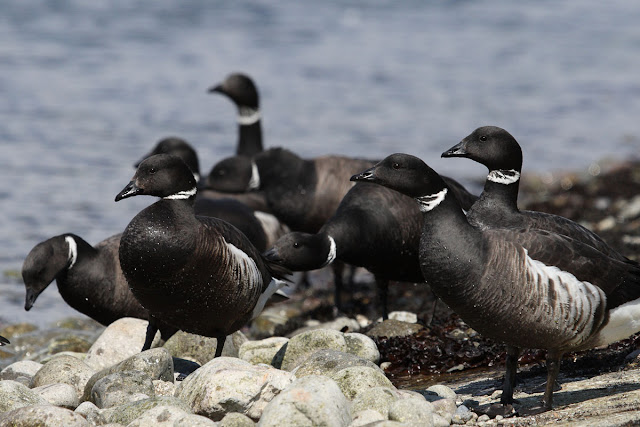 A group of soon to depart Brent Geese in Hakodate this afternoon. It was a nice mild spring day, I'd walked down the coast with the intention of finding some summer plumage Black Necked Grebes. I did see one but it quickly dived and disappeared out to sea. At least the Geese were posing nicely. 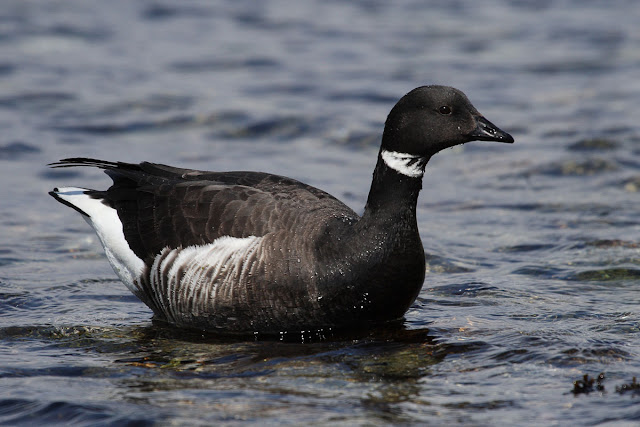 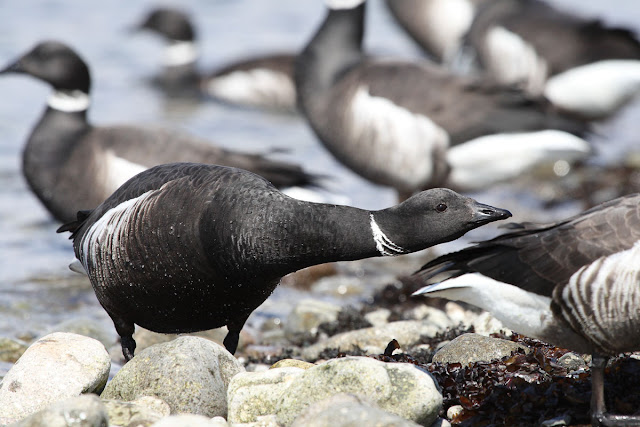 Last week a reader of this blog from London sent a photo of a Spectacled Guilemot we had seen together in Hakodate in January to the national broadcaster NHK to be shown on a local news show . Her picture was taken with a small compact and she asked if NHK could use my pictures from this blog. She had given my e-mail to NHK and they would contact me and also acknowledge me (or so I stupidly thought). I said OK. They didn't contact me but I thought never mind my name would be broadcast, I can forgive them. I told several friends and all my in-laws and they arranged to watch it too.

So anyway it was on Friday night. I taped it. I rewound the tape through all the interminable navel gazing crap about the non-threat from a North Korean test missile (yawn) and there my photos were. On NHK! But wait a minute.............under the muzak soundtrack they discussed the photos for about a minute and........absolutely no mention of yours truly. Nothing. Just 'a Japanese lady from London, Miss X sent these.....blah blah'. My brief moment of fame (albeit on a minor local news show but I digress) snatched away from me. Sorry but that isn't what I'd signed up for. I'd expected something along the lines of 'yeah these photos were taken by an English guy living in Hakodate, you can see more on this website address' etc etc. But nothing. Absolutely nothing.

In the great scheme of things this is unimportant. I know that. My photos aren't that great. I know that. I didn't lose any money or anything. I know that. But.....still. F**king hell. And as for the editor, Chisato Tachibana, who used my pictures without showing me the basic common courtesy of contacting me first or acknowledging me (oh and ignored an e-mail I sent her), I hope NHK leaves her name off the credits of every TV show she ever works on. The daft cow. Now I'm thinking all these dark thoughts. Like 'yeah, if I were Japanese they would have asked me for sure and credited me' and projecting racism on them. I need to stop doing that.

I know anyone can right click on these photos and save them to their own PC. But showing them on TV without asking for permission? Now I'm thinking how much I can sue the bastards for........

Despite all that thanks to Megumi for suggesting they use my photos, I was flattered. It isn't your fault NHK are a bunch of morons and didn't mention me.

Right. Enough of that and it's off my chest and finished. Just bear in mind if you steal my photos I will hunt you down and destroy you. Oh yes.

The Crossbills were still around last week but in smaller numbers...... 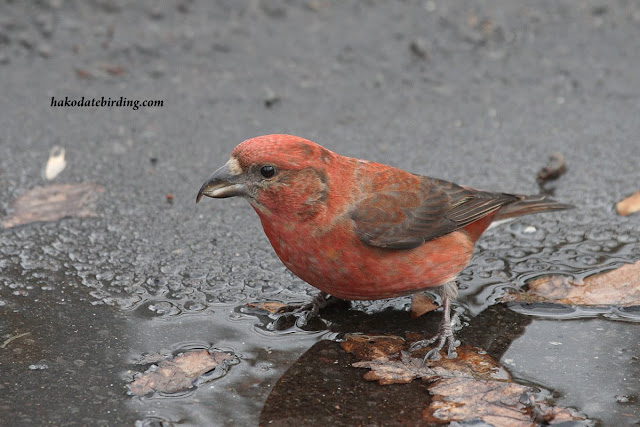 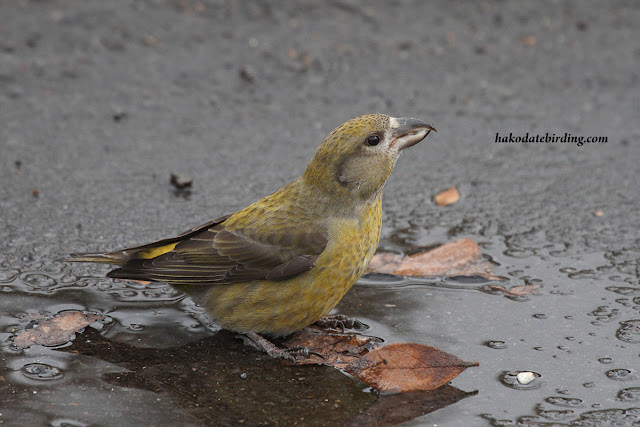 It's 2 years since I bought my camera and I've taken over 50,000 shots. Crossbills would have to just about my favourite subject..........more Crossbill shots are here.

Not much else around to be honest. No car so I've been stuck in town for the last fortnight (and because of my wife's new job and my new schedule which kicks in next month out of town forays will be restricted to Sundays or public holidays only).

Here's a pic of a Dusky Thrush, a very common bird at this time of year. 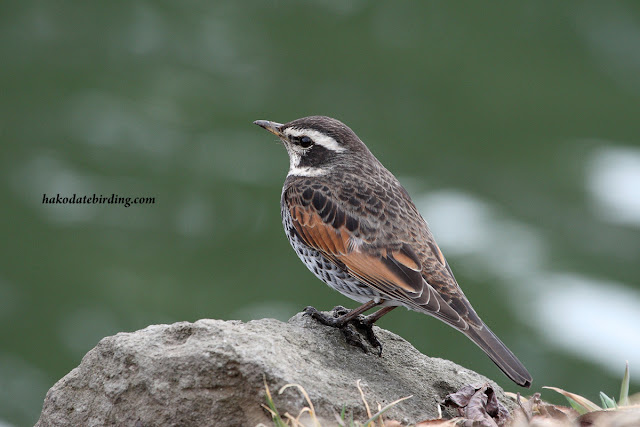 A few migrants appearing. Some Whooper Swans flying north over town, the first Bullheaded shrikes and Skylarks arriving too.....

And here a couple of examples of bizarre English that make expat life in Japan just that little bit funnier. 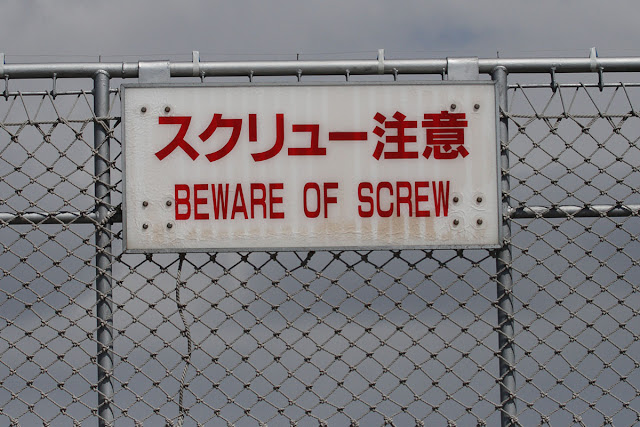 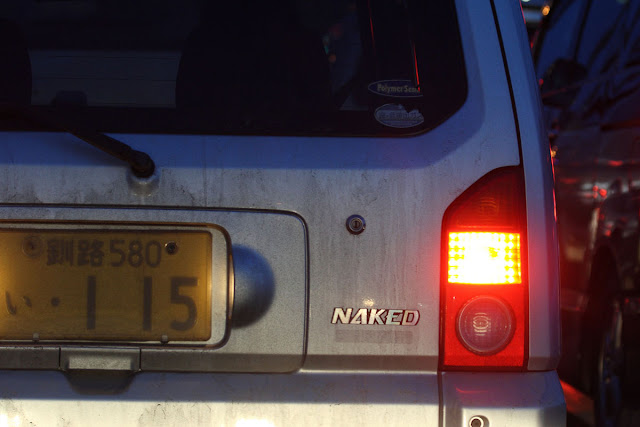 I watched England beat Slovakia last night. Only a meaningless friendly I know but they're looking good for Wednesday night against Ukraine, if they win that they can start checking out flights and hotels for South Africa I think. Of course they'll no doubt flop when they get there but at least they'll be there (which was looking very unlikely when they were being held at halftime by Andorra back in September). And next weekend if Liverpool beat Fulham and Villa can take a point off Man U the Pemiership will look very interesting indeed.

Some bad news on Friday. My uncle, Tom, died in Queensland and will be sadly missed by all. The first person to buy me a beer in a pub, the first person in my family I got stoned with. Oh and he sailed across the Atlantic and went diamond prospecting in Guyana and lots of other crazy stuff too. He had a great life that's for sure and will live on in all our memories.

Spring is here in Hakodate. It's getting milder and my business is picking up. When I look outside life isn't so bad.

Just don't think about NHK I tell myself.