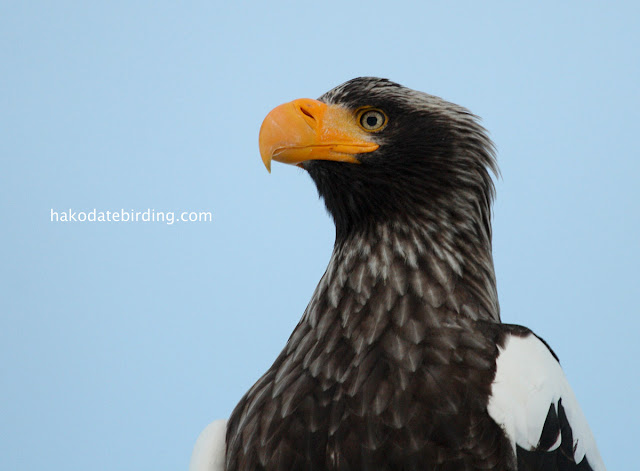 A Stellers Sea Eagle up close in Rausu Harbour.

I had a big trip up to northeast Hokkaido last week. I saw lots and lots of eagles but ended up slightly disappointed as you will find out in Part 2.

Our trip started in Kushiro. We (me, my wife and Dan) flew there from Hakodate and landed around 4pm and picked up the rental car and just had enough time before sunset to see this creature in the river in the middle of Kushiro. 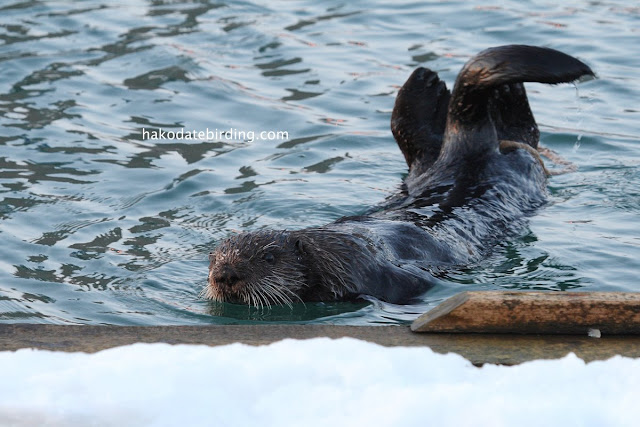 It's a wild Sea Otter, kind of like a cross between a giant slimy rat and a seal. It has been named 'Ku-chan' by the local media and is something of a celebrity. There were lots of people watching it (some had fallen in the river in days previously, it was very very icy) but it was too dark for any decent pics so we headed east to Furen-ko and Matsuo's well-known lodge on the lakeside. The GPS was a godsend and we didn't need to consult a map for the whole trip, just tap in the phone number of where you want to go and you're sorted. A nice female voice informs you when a turn is coming up too.

The lodge was full with several guests from the UK and we spent some time the next day with a nice couple who had just been to the Pacific Seabird meeting in Hakodate and there was another man with a loud voice who sounded just like Michael Caine..

We got up the next morning and had a cold bleak walk around the lake and beach. Not much around in the forest, a White Backed Woodpecker and some Tits and Goldcrests and of course the Eagles which were everywhere. A few Gulls and ducks were on the sea too and a group of Asian Rosy Finch were also present. 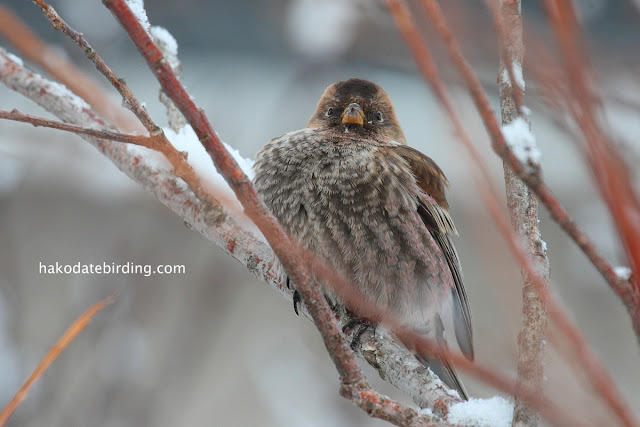 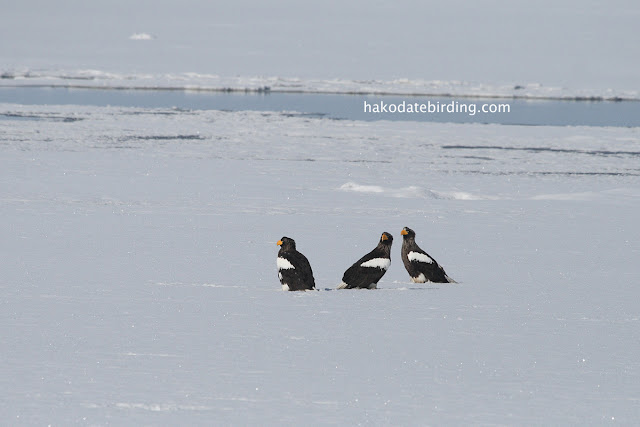 I'd been here twice before in May and know the area a little bit so we headed out to the easternmost point in Japan the other side of Nemuro. There were some more great views of eagles, some even sitting on the top of lamp posts. They were usually immature birds and not so shy or wary. 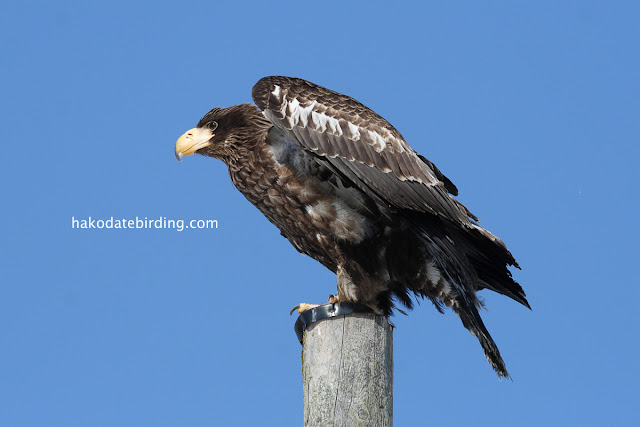 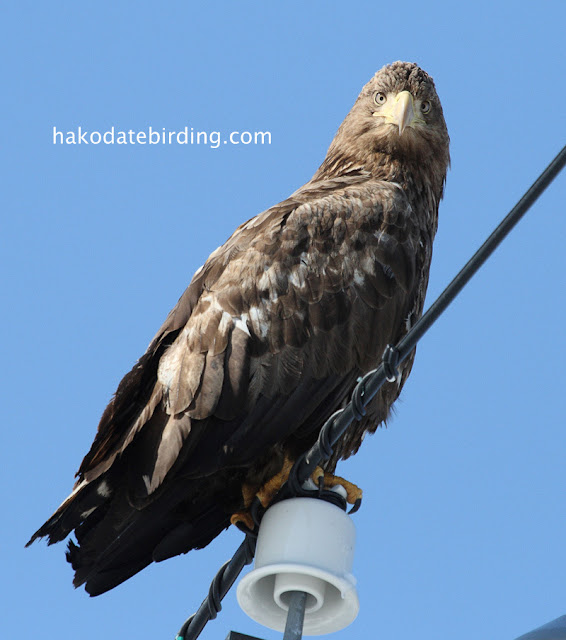 Noasspu Cape was cold and windy but there were lots of birds on the sea. Long Tailed Ducks were one of several duck species and there were also Red Necked and Slavonian Grebes and various species of alcid. These included Spectacled and Pigeon Guilemots and Ancient Murrelets. Several seals were bobbing around too. More shots from Nemuro are here.

Heading north up to Rausu we took a brief look at Notsuke, lots of White Winged and Black Scoters and more Long Tailed Ducks here but we wanted to hit Rausu in time to see the eagles returning to roost just like it said in Mark Brazil's well known book. We passed several eagles roadside but pressed on to the aforementioned location which turned out to be a tiny river with, erm, no eagles whatsoever. We asked a passing local if this river was the right one and he said the eagles didn't come there anymore and it was old information. Serves us right for using a 25 year old book. We headed back to the harbour and to be greeted with this sight. A Stellers and White Tailed Sea Eagle sharing a perch on top of a streetlight. 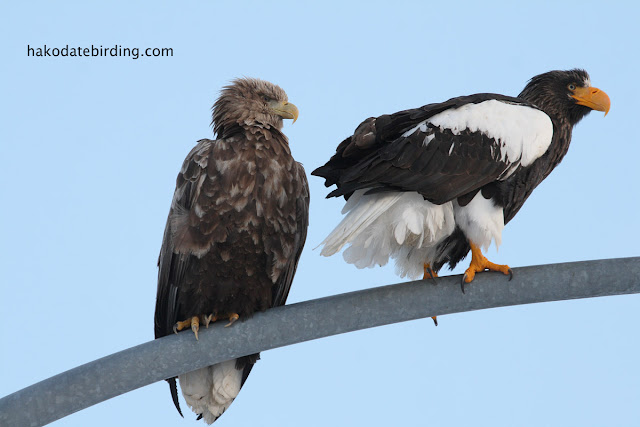 There were several eagles of both species affording extremely good views and all of them were adults. 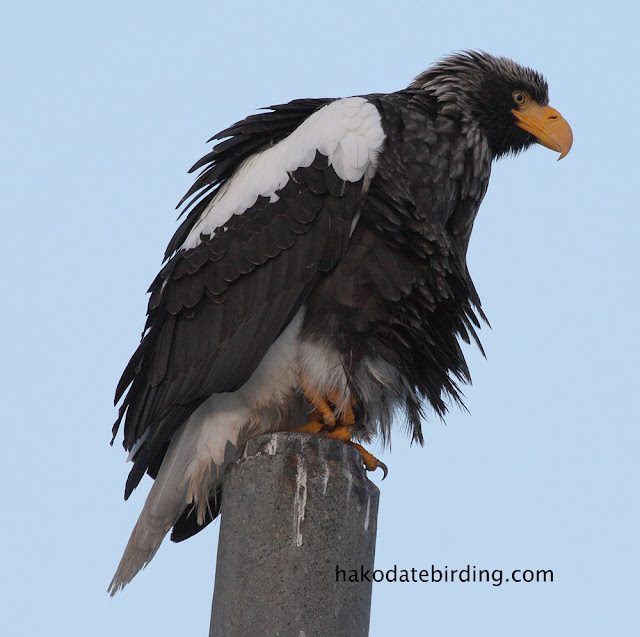 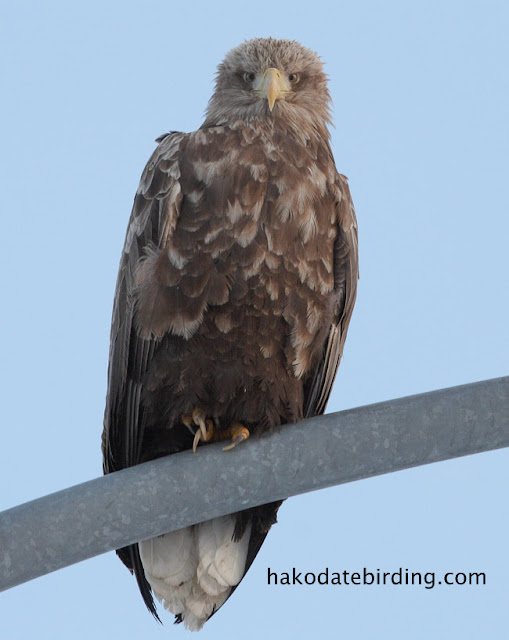 Great views and they compensated for some later eagle disappointments. Like I say the eagles were all over the show, even pretty much perching in people's gardens. 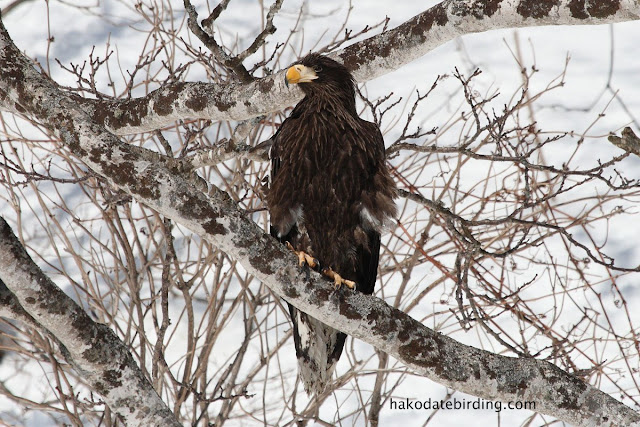 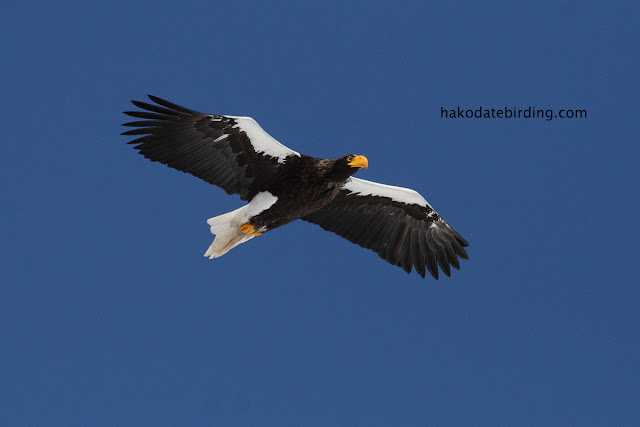 The harbour itself was also great for birds, all the usual winter gulls and ducks were around as well as Common Guilemot and some Harbour Seals too.. 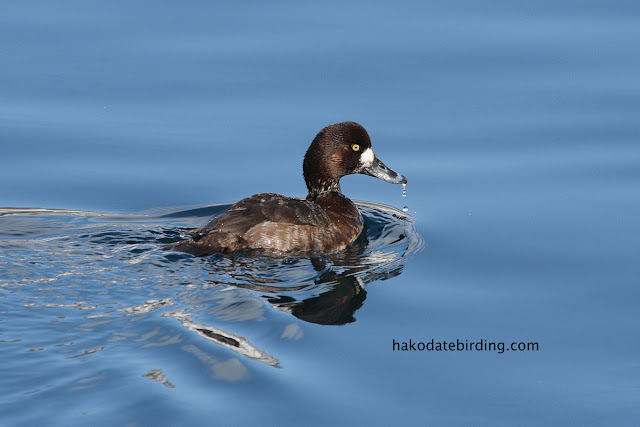 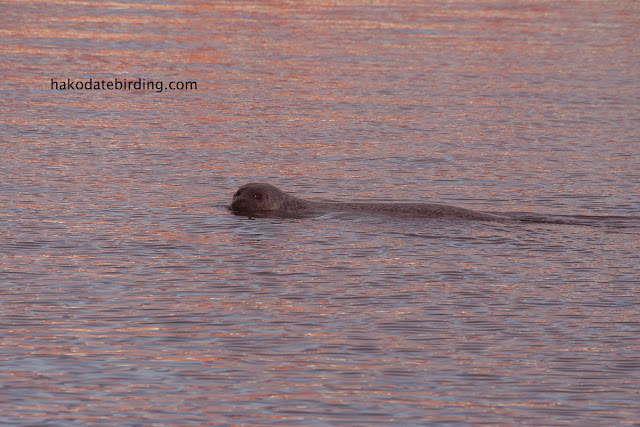 We visited the harbour several times. Here are a couple of views, one looking inland towards Shiretoko and one looking outwards towards the Russian island of Kunashiri at sunrise. 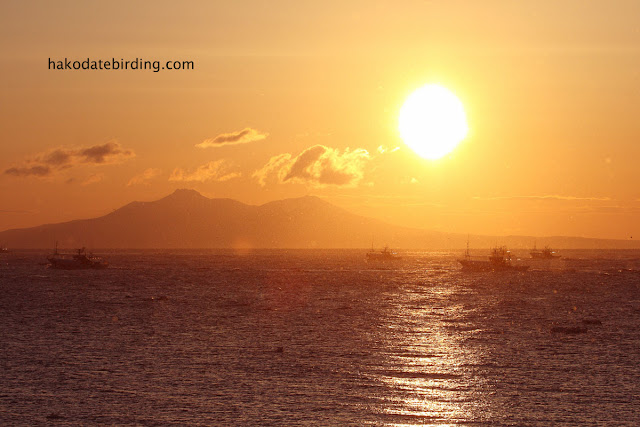 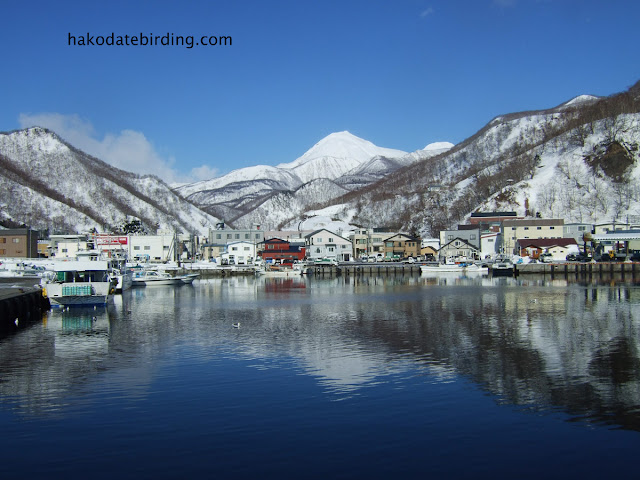 More shots from Rausu are here.

We were staying at Washi-no Yado, a wel known guesthouse that specialises in this rather rare species. 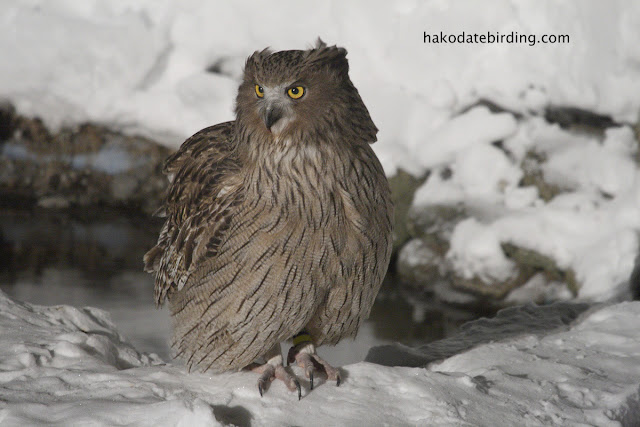 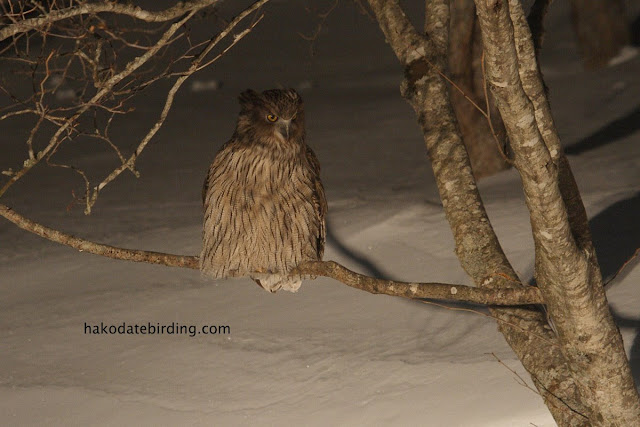 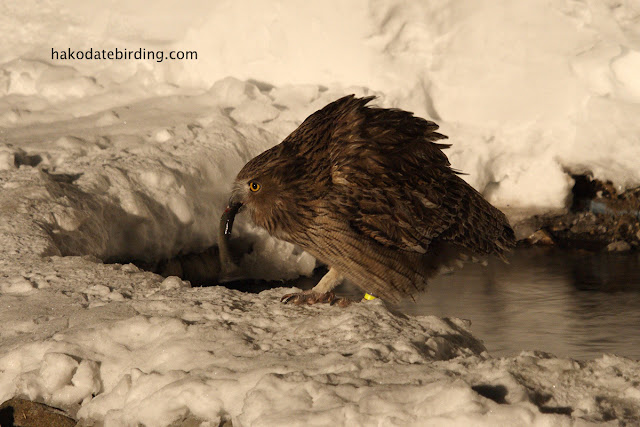 Blakistons Fish Owl, the world's largest and also one of the rarest Owl species. The guesthouse owner has constructed a small pond next to the stream running in front and stocks it every night with fish (after dinner of course). There is even a light that shines on the pond. You either sit at your window in the guesthouse with your camera pointed and ready or sit in the car with the tripod set up next to the window and shutter release ready. Me and Dan sat in the car getting drunk on beer and hot sake with the heater on both nights. The Owl came 4 times and despite the slow shutter speeds and high ISO settings I was pleasantly surprised by the quality of these photos. I know this is contrived but these are wild birds. Honestly.

It was very very cold in Rausu, way colder than Hakodate. When we were in the car drinking beer waiting for the Owl to appear (and the heating off) our bladders shrank to the size of walnuts. We manfully waited for the Owls to appear and leave before we relented though.

It was much colder when we went out on the boat to check out the drift ice abut I'll save that for Part 2.