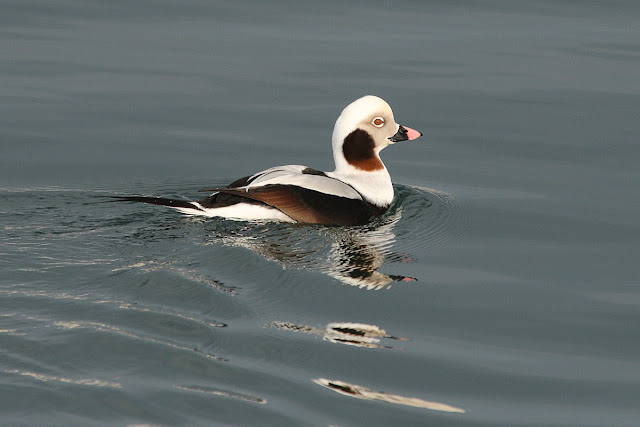 A male Long Tailed Duck earlier this week. This was as close as I've ever been to this species, usually they are quite a distance offshore. There were about 10 or so in the harbour at Oshamanbe earlier in the week. Males, females and immatures. 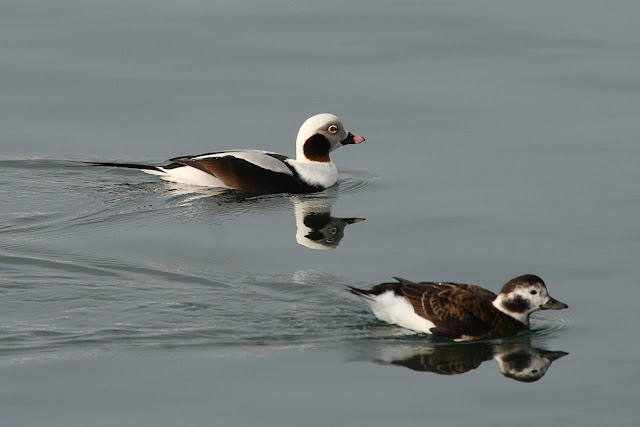 I even uploaded this very poor digiscoped video to youtube showing the males displaying and s couple of Goldeneye gatecrashing the party. It ain't actually David Attenborough standard although you can enjoy ne uttering a Motsonesque 'heh' towards the end, the waggling tails are pretty funny. You can also hear my heavy breathing as I must have been bent right over where the internal microphone was.

Sharing the harbour were lots of Scaup and this lone Slavonian Grebe. This is another species I usually only see bobbing around way offshore. 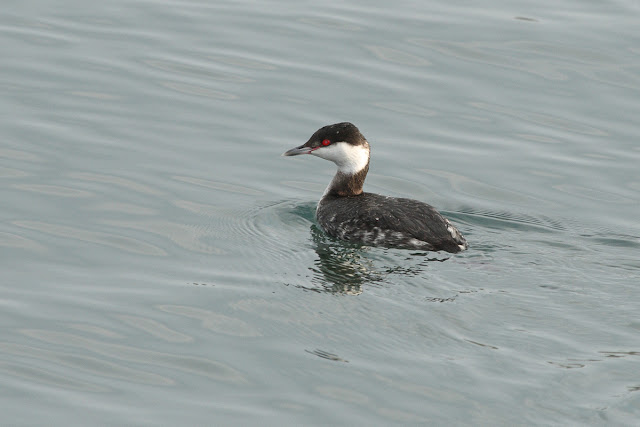 We ended up at Oshamanbe because the eagles weren't showing so well at Yakumo. The numbers seem to be decreasing, perhaps a combination of the mild weather and the low numbers of dead salmon for them to feed on. There were still some present but not in especially high numbers or close at hand. We were showing a friend the eagles so the Long Tailed Ducks were a bit of a bonus.

Other birds at Yakumo included Bean Goose plus the usual common stuff like this Japanese Pygmy Woodpecker which was fairly tame. Here are some more shots from Yakumo. 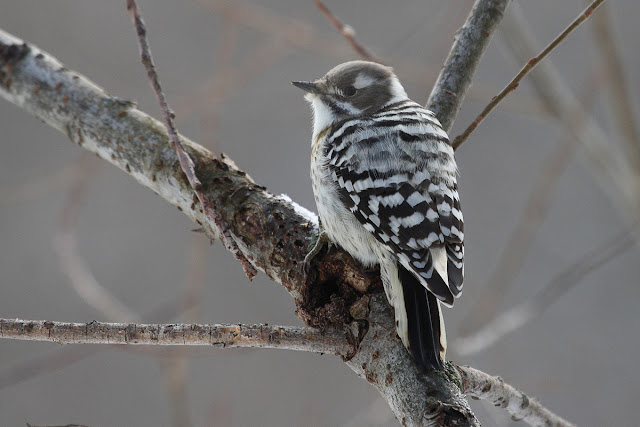 The weather has been very mild this week. Rain and temperatures 6 or 7 degrees above freezing, very unusual for mid to late January. Not much stuff around the Hakodate area except the usual tame Nuthatches etc at Onuma. 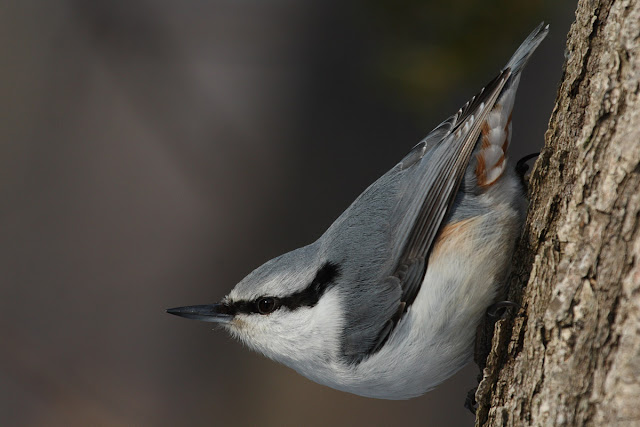 I made some videos of these too. They didn't turn out so good, this was the best, a strange hypnotised one. They often do this, just freeze for a minute or two, blinking a bit and listening intently for something.

As with the above video if you don't expect a high quality piece of nature footage you won't be disappointed.


The Great Egret was still hanging round the same unfrozen pond. 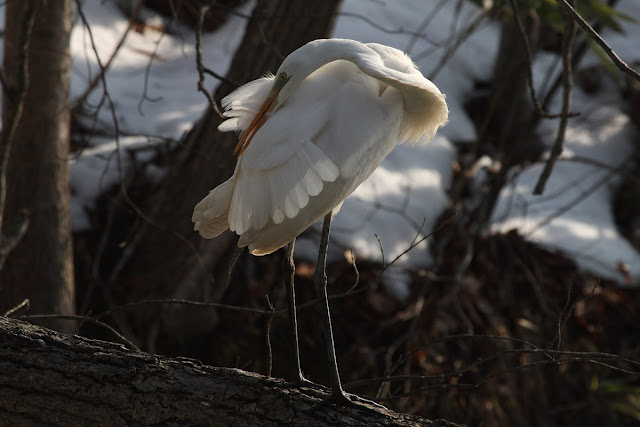 And despite the mild weather Onuma still manages to look wintry at least. 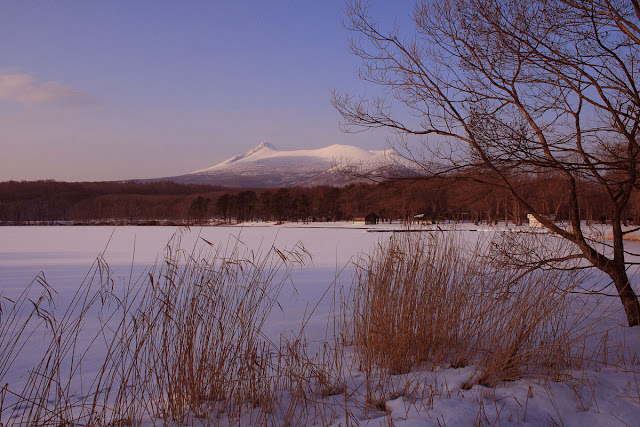 More shots from Onuma are here.

The week finished at Yakumo (again). It was much colder with a biggish snowfall Saturday night. The usual species were present including the Bean Goose and about 25-30 eagles only. Again the bridge over Route 5 was the best viewing point, this was the shot of the day, an immature White Tailed Eagle. More photos are here. 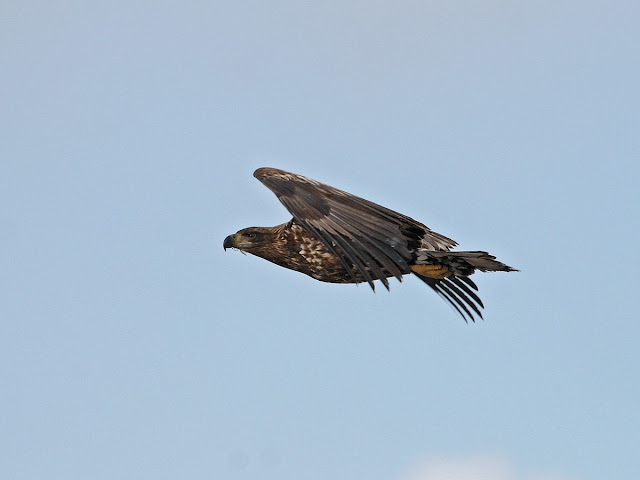 TV Show of the week has been 'Sons Of Anarchy', a slightly corny but enjoyable drama about a biker gang in California. Ironically the actor who plays the main character used to be in BYKER Grove. And he played that underaged character in 'Queer as Folk'.........now he looks like Kurt Cobain and pistol whips Nazis.

Speaking of Nazis I've also been catching up with some of those Louis Theroux shows on youtube, forgive me for being a year or two behind on such matters. The Nazis he interviewed in one show seemed like nice rational tolerant individuals compared to the Westboro Baptist Church members he interviewd in another episode. These are the fundamentalist christians who picket military funerals because they think god is punishing America because the US tolerates homosexuality and that divine retribution is being visited upon America. They have banners like 'God Hates Fags' and 'Fags Eat Poop'. Morons.

I've been reading 'The Road' by Cormac McCarthy. My god this is a bleak book. 2 survivors of a nuclear winter dodging cannibals in the ash and snow.......difficult to put a positive spin on that.

I knew Man U would be top going into February. Damn.