Yet more Eagles..........a jerky pixelated video and a rarity 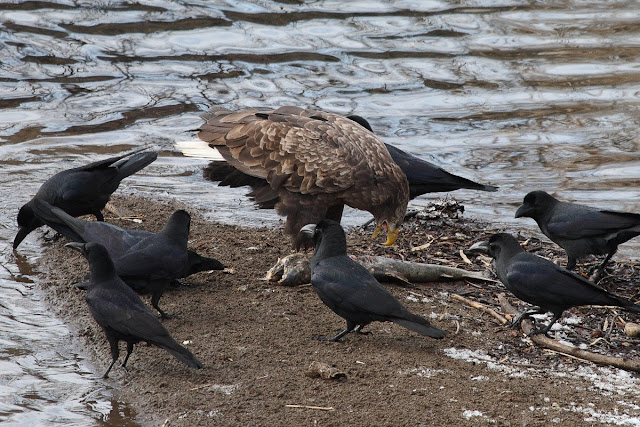 We went up to Yakumo for the third time in 8 days last Wednesday and got some more nice eagle shots. This adult White Tailed was snapped off a main bridge inland at Yakumo. The crows were hassling it mercilessly. 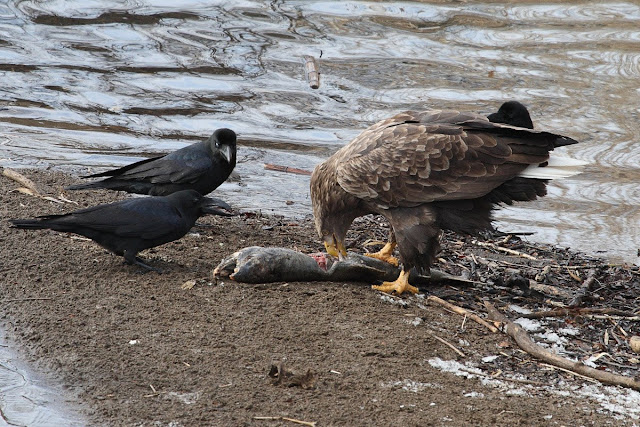 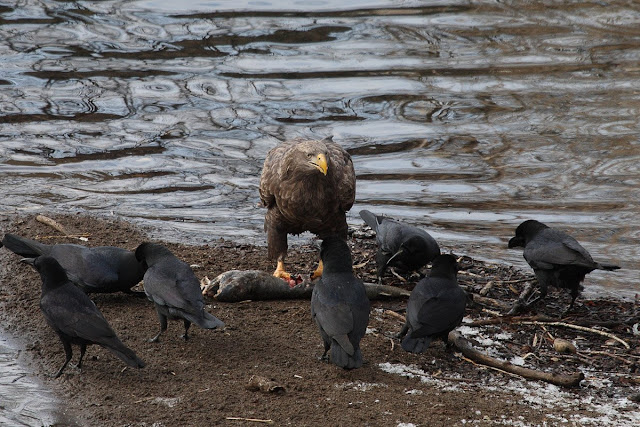 You can see more photos of this individual here.

And I even managed a crappy digiscoped video of an adult Stellers Sea Eagle.

I tried uploading it to my own website but it took ages for the page to download when viewed in all browsers so i thought f**k it put it on youtube, it's easier. You can read more about this and see more video here. Whilst I was setting everything up it was eating a salmon on that branch and defending it against the crows. Unfortunately the fish fell off before I was up and running and all we get is a confused looking eagle taking a dump and them flapping off in a huff.

I'm glad I found a use for my old compact digicam and scope. Videoscoping. I hardly ever use my Scope except for a bit of seawatching at Kamiso.

So I found a bit of a rarity on Friday. A Fieldfare was among the Dusky Thrush.I only got a very brief view but it was clearly a Fieldfare, god how many thousands of them have I seen in England and Germany. No photo and I couldn't relocate it despite heroic efforts to do so. Of course now small doubts set in. But it was a Fieldfare, honestly. Shame it f*#*ked off and left so quickly.

I've seen a few rare and semi-rare birds around Hakodate now. The Fieldfare of course, Hoopoe, Mugimaki Flycatcher, American Wigeon. Plus a Caspian Tern over at Asabu in 2006. And I don't have a single photo of any of them.

It's got cold again and Onuma was finally completely frozen over on Thursday. 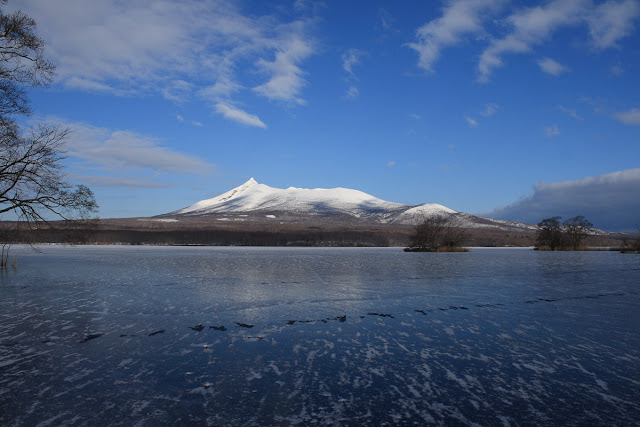 Not much in the way of bird pics so here's a Red Squirrel instead. 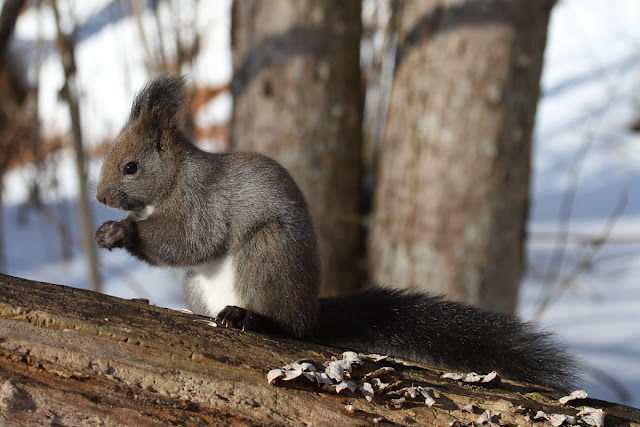 More pics and bird related stuff on my new blog.

I found 2 other Hakodate birding blogs. Both appear to be written by 2 staff (or students I suppose) at the Hakodate branch of Hokkaido University. You can click on the links on the right or go here and here. We've been seeing some of the same birds in the same places (Thayers Gull, Daurian Jackdaw etc) but have never seen each other.

So Liverpool couldn't beat Stoke last night. By the time Liverpool play again Man Utd could have overtaken them at the top. Oh and Stevie G might at that stage be more concerned with getting good legal advice than winning titles. Why the hell were Torres and Keane on the bench? Benitez is a good solid manager but not a great one. Now we have to hope Man U and Chelsea draw and Man U somehow drop points against Wigan and Bolton. Oh and Rafa's outburst against Ferguson (true though most of it was) could have waited until the end of the season with the title safely in the bag. I still can't see Liverpool as Premier League champions. Go on you bunch of foreign mercenaries prove me wrong.

Food of the week has been nukasanma, a kind of salty big anchovy type fish thing that my mother-in-law makes.

TV Show of the week has been 'Survivors'. I realise it's a bit of a badly acted cheesefest but as I said last week I'm a sucker for this kind of thing. 28 Days Later, The Day of The Triffids, Children Of Men, The Stand: I watched 'em all. Even the recent 'I am Legend' was OK. 'The Postman' was crap though. Has Kevin Costner ever made a decent movie?

Our car is currently off road. It has been making all kinds of odd noises and it's going under the knife on Tuesday. Further trips this winter to Yakumo/Onuma and even Kamiso and Ono depend on the outcome of the visit to the garage so fingers crossed on that one........