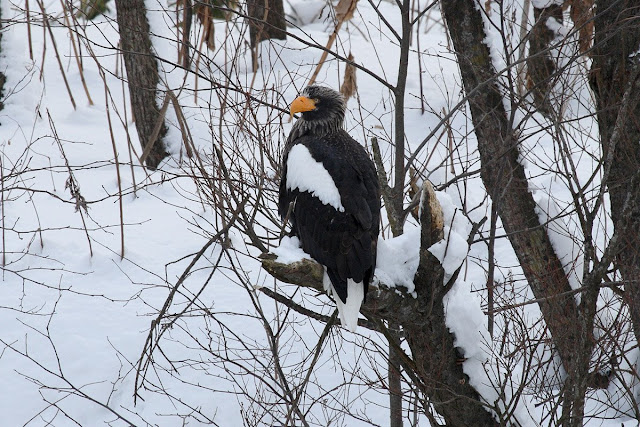 An adult Stellers Sea Eagle at Yakumo this afternoon. We took some friends up to Yakumo to see the eagles, it was a beautiful sunny Morning but the eagles didn't seem to be as numerous as last week and most of them were just sitting in distant trees doing nothing. The best place for seeing them was on the bridge over the Yurappu River on Route 5. 90% of the the eagles seemed to be White Tailed though, and most of them immatures. Here's an adult snapped from the bridge. 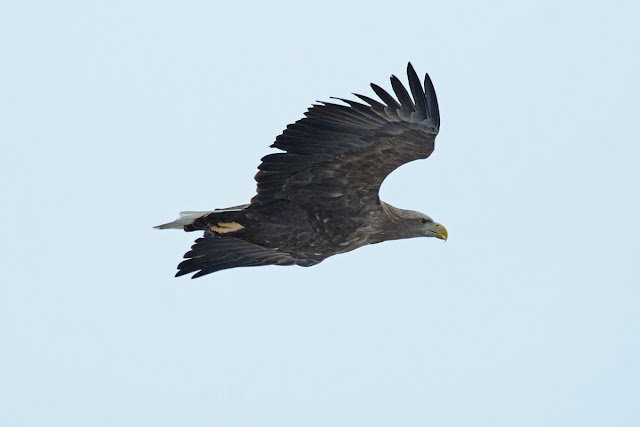 Oddly enough there was a single deer splashing around at the mouth of the river. Lord knows how it got there. There was also a single distant Lapwing on the river bank, only the second one I've seen in Japan. I've seen thousands and thousands of them in the UK of course but they're pretty scarce in Hokkaido. 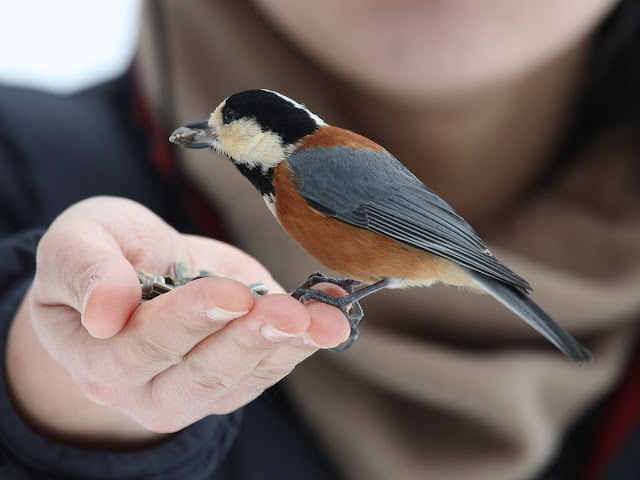 My wife with a Varied Tit on her hand at Onuma earlier in the week. A chilly looking Great White Egret at Onuma last week. Wintry weather hit south Hokkaido for sure (finally), lots of snow and freezing temperatures. The Egret (a bird I normally wouldn't associate with snow and ice) was in a small unfrozen part of the lake just behind the toilets in the main car park in Onuma village. You can see more Egret stuff here. 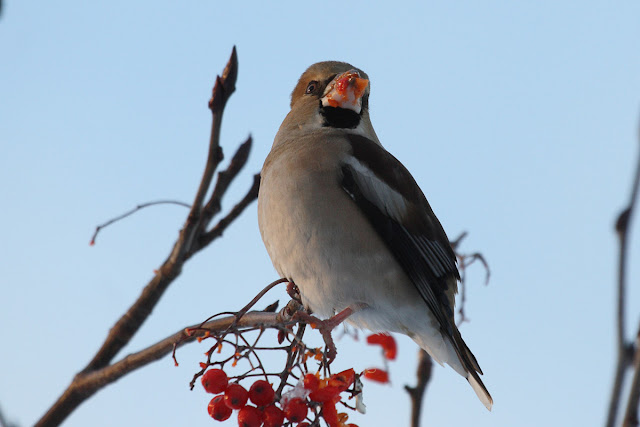 The last week has seen a huge invasion of Hawfinch into the region. They are everywhere. And very shy and flighty too. The above individual was snapped out of the car at Nanae, a suburb of Hakodate. Some more photos are here. I've only ever seen this species once in the UK but this common winter visitor to Hokkaido is abundant this year. As are Rooks and Siskins, 2 other species which seem to be everywhere I look this month.

We were actually looking for Waxwings before I got sidetracked by Hawfinches. Lots of berries for them to gorge on but so far I have seen the grand total of 3 Bohemian Waxwing in crappy light and not exactly close either. Here was the best photo I could manage. 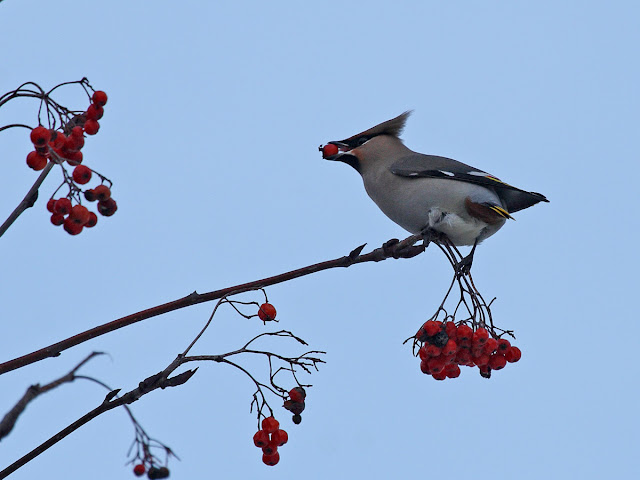 Over at Shikabe ;last Wednesday there were a few confiding Black Necked Grebes in the fishing harbour. Shame the weather was a bit dark..........for some more pics check out my other blog here. 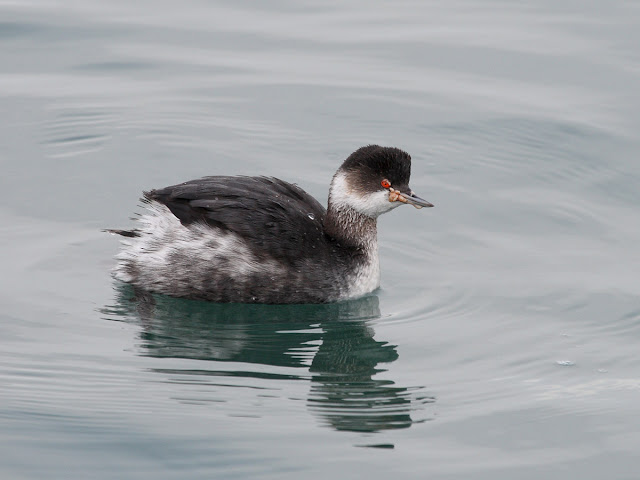 Here's a Red Fox snapped in the twilight at ISO 800 at Onuma this evening. 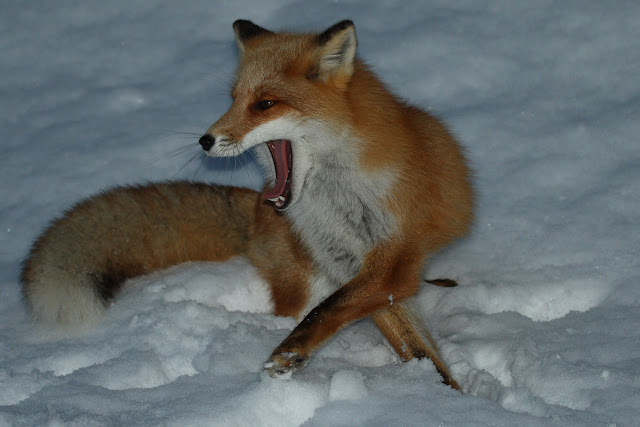 And here's a nice wintry view of Mt Komagadake from the west. 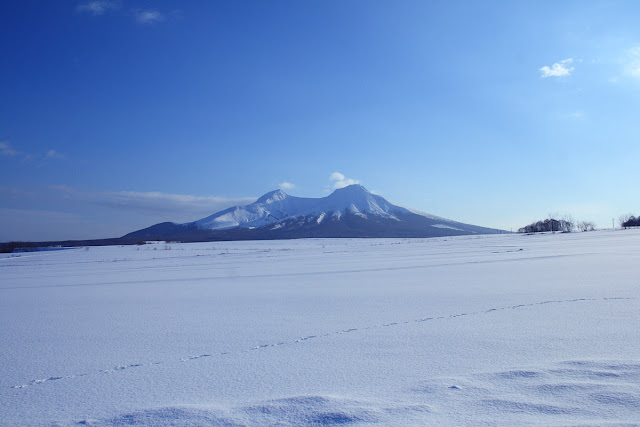 And here's a crappy distant digiscoped video with my naff gear of some feeding Stellers Sea Eagles way off in the distance.............

I saw a few people birding today and 2 of the Japan birding blogs on the right have pictures of flocks of Snow Bunting at Yakumo.............a bird In have yet to see in Japan. Mind you it was late in the day so cold and windy when we ended up at the coast a flock of Snowy Owls may have been nearby and gone unnoticed. One of them also saw Pine Bunting, a bird I've yet to see anywhere ever.....

I was watching the footy last night. A couple of minutes to go before the end of the Man U and Chelsea games. Man U drawing and Chelsea losing. Looking pretty good until 3 goals went in during a crazy 2 or 3 minutes meaning Liverpool are only 2nd and Chelsea are still well in the hunt just behind them. Plus Arsenal and Villa won. Damn.

So Boy George has been sent to prison. If that had happened 25 years ago all the inmates would have been drooling in anticipation. But looking at pics of him now those same grizzled cons will probably be asking for protective custody if they have to share cells with Her Majesty's Prisoner O'Dowd.

Food of the week has been さんま (a Japanese sardine type fish) on baguette with processed cheese and lots of black pepper.

Song of the week has been So. Bay by Frank Black and the Catholics.

Birds of the week have been Hawfinch (quantity-wise) and Northern Lapwing (quality-wise).

I tried to change the layout of this blog last week (making it wider) but my cackhandedness meant I deleted all the links and pictures in the sidebar (plus I didn't like the new wide look and reverted back but it was too late). I had to manually redo the links and decided I couldn't be arsed with the old pictures of me in my late 20's smoking pot in various third world countries so please enjoy the new minimalist design.

My NEW BOOK is on sale. The book is actually quite nice and the photos are all from last year and the end of 2007. If you buy a copy I get enough profit to buy 2 cans of beer and bring me great happiness for about 45 minutes. So bear that in mind as you dither with your credit cards........