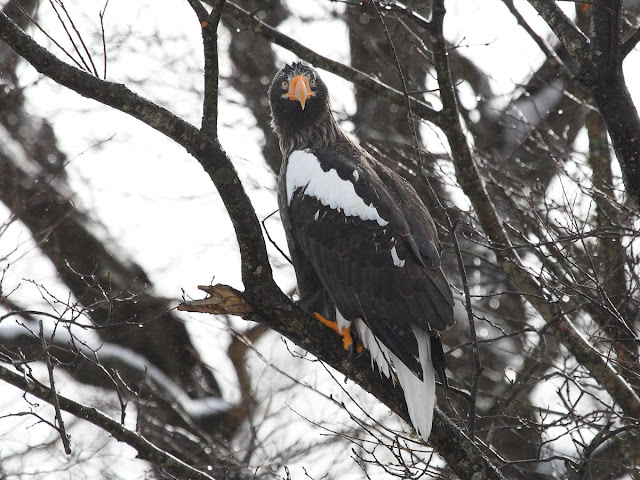 A Stellers Sea Eagle at Yakumo a couple of days ago.

So 2009 is underway. The relatively mild weather has continued meaning there is little snow in Hakodate. No two winters are ever the same of course but this one does seem unusually benign. The lake at Onuma is not 99% frozen over, not even 50% perhaps. 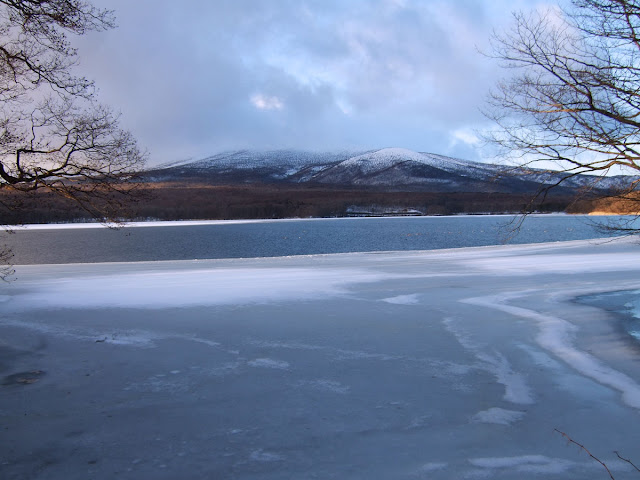 The eagles at Yakumo are still around. It was much more wintry up there although the snow was not quite as deep as in normal winters. For more eagle pics please check here. 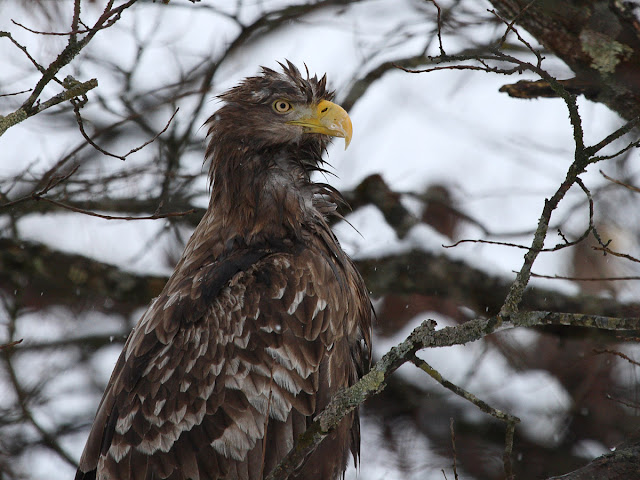 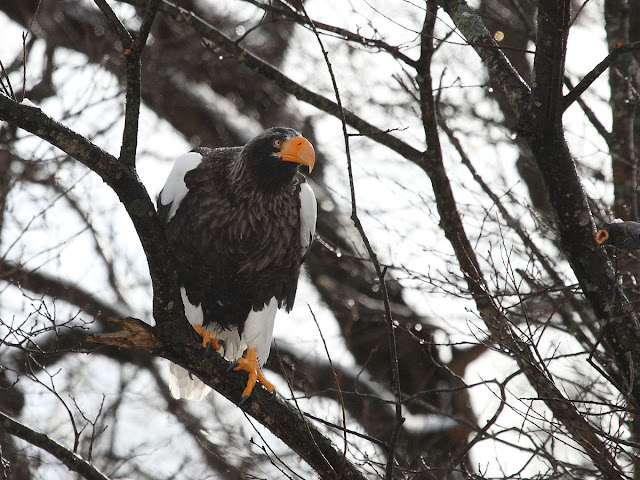 And here is what they'd been eating. 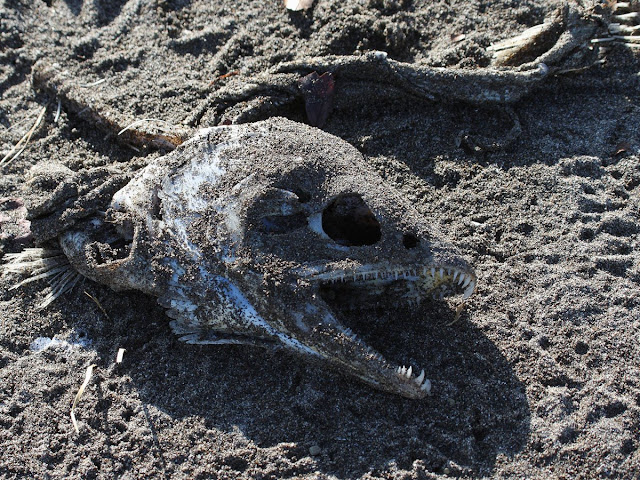 Mostly grey weather so far in 2009. No sparkling blue skies and pristine snowfields so far this winter alas. Lots of views like this one though at Menagawa this afternoon. I did get a crappy picture of an Ancient Murrelet though. 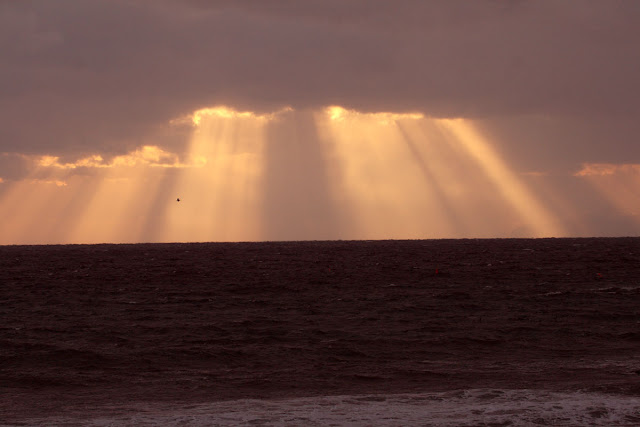 The Ural Owl was still round and we saw it several times. I tried digiscoping with the Fuji 31FD but after using a DSLR with a decent 400mm lens digiscoping just doesn't cut it anymore, too soft and blurry (to be fair I use a 65mm scope with a 32X eyepiece, probably not the best combination but it's so fiddly that even if I had a 80+ mm scope I still couldn't be bothered. I admire those who get sharp images from a compact connected to a spotting scope but I give up).

Here's a cropped one from my DSLR anyway, it looks miles better than frame-filling digiscoped images. 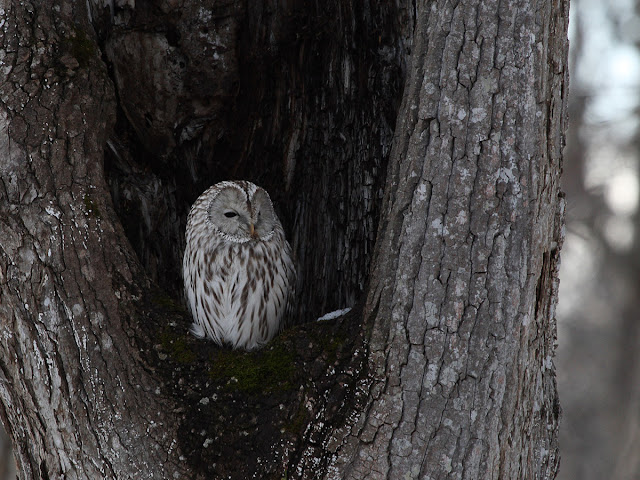 Here is a digiscoped one.From the same standing position, uncropped. 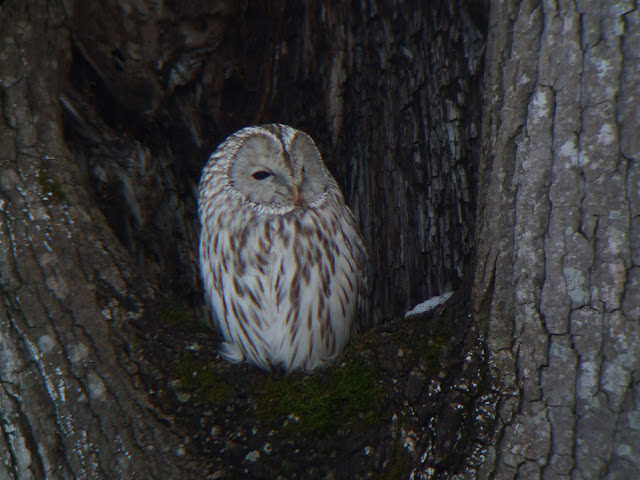 On the same day I got some nice pics of this Red Fox. 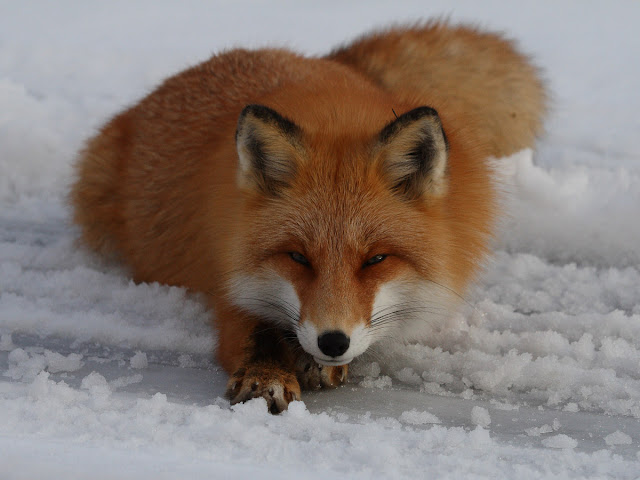 I was going to do an end of year post but forgot. 2008? Bit of an up and down year. I turned 40 which wasn't such a big deal actually. I don't feel 40. I feel about............37 or 38. The end of the year was a bit of a downer. My friend passed away, my business dropped off somewhat (and that means my salary dropped too) and the economy in the UK (which was always my get out clause if things went bottom up here) is in an even worse state than my own finances.

But 2008 wasn't all bad. I had an enjoyable trip to England last spring and I saw north Hokkaido for the first time in late May too. Not so many new birds......Oriental Pratincole and Marsh Sandpiper were my only 2 life birds I think. Yellow Wagtail was new to my Japan list. Sport? Well footy-wise Liverpool and England are looking good going into 2009. I look forward to Liverpool not blowing it after Stevie G gets sent down. I watched the first half of the game against Preston last night, a bit odd seeing Deepdale on my TV screen in Japan.

I'll be posting more regularly on my new blog from now on. It looks a bit amateurish I know, even a simple application like iweb confuses me ( I tried rapidweaver which was harder and dreamweaver which was impossible) but hopefully it'll get better.

I've just been watching Blakes 7, season 4. Cheesy but still great. Avon was always one of my childhood heroes.

I tried downloading "Survivors" and got episodes 1-5 in MP4 format. They were so jerky and pixelated they were unwatchable..........from the jerky pixelated intro it looks like just the kind of post-apocalyptic tosh I'm an absolute sucker for. Hope there's an avi version next time I put my downloading hat on.

Food of the week has been scallops and shimeji mushrooms fried in butter and soy sauce with garlic and pepper. Pretty darn tasty, I coked it twice over the festive period. We had expensive crab last night. Nice, but what a lot of effort to get at such a small amount of food. Plus one of the spikes on the shell cut my finger. Next week I'll be back on fried rice every lunchtime as austerity sets in.

I used some of my air miles to book flights to northeast Hokkaido in late winter. Some killer Eagle and Crane shots beckon........if winter ever kicks in that is. I guess it'll be much much colder up there, maybe my huge down parka will make an appearance this season after all.