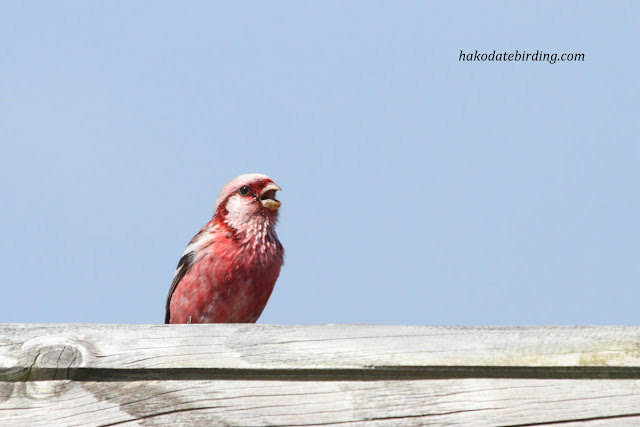 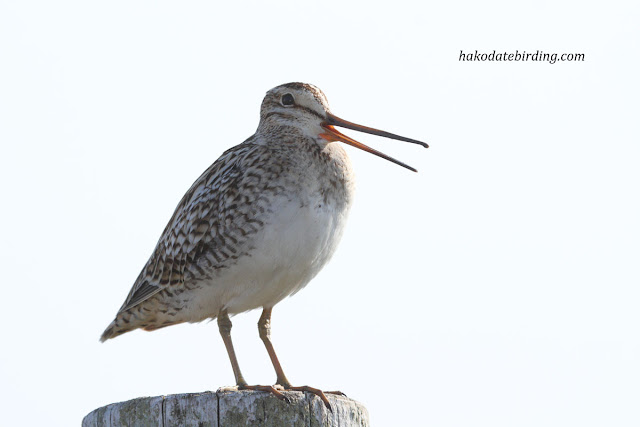 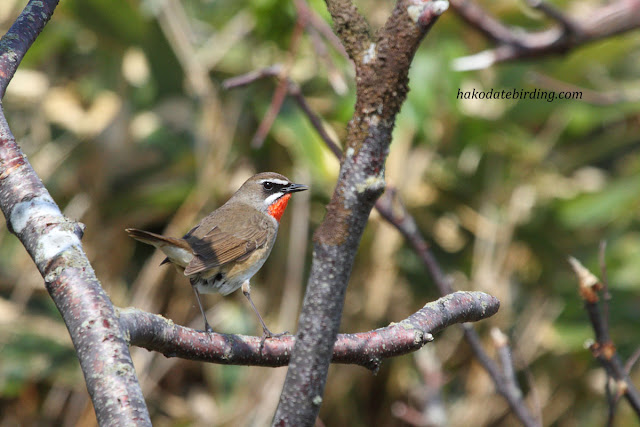 We just got back from a big trip around Hokkaido, a bit of a tough one with some very chilly nights in the tent and lots of driving for my poor wife.

The first day we drove up to central Hokkaido and camped in a small town called Pippu just outside Asahikawa. En route we stopped at Mukawa which was rather disappointing: there were no waders at all and the only noteworthy species was a lone Glaucous Gull. Near the campsite were the usual common forest birds but nothing especially interesting and the next morning we headed up to Monbestsu on the Ohotsk coast. The birdlife got more interesting as we hit the coast. The first Siberian Rubythroats, Lathams Snipe and White Tailed Eagles appeared but nothing posed for the camera and in the afternoon we reached Lake Kucharo-ko where we camped for the next 2 nights. 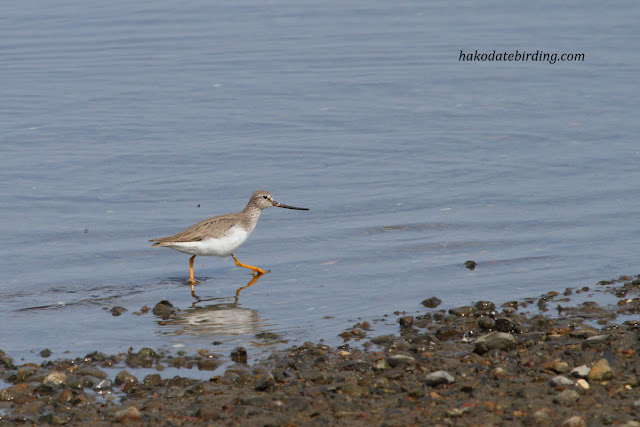 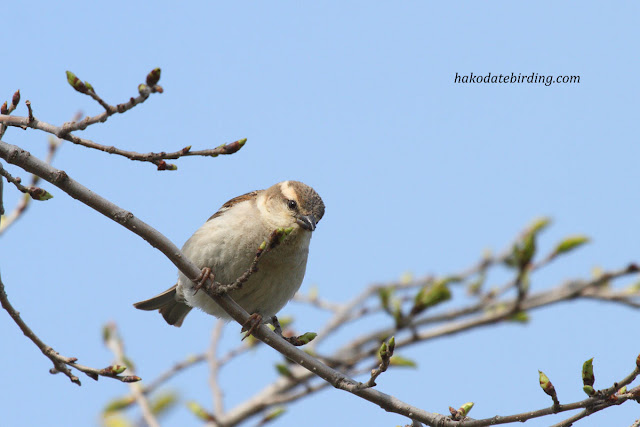 White Tailed Eagle were also in the area. 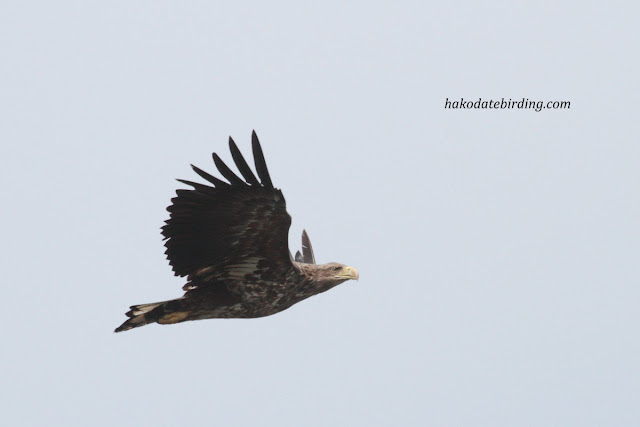 The north part of Hokkaido seems pretty good for birds: there are lots of grasslands, marshes and lakes. We stopped at one headland and it had a huge colony of Sand Martin whilst and Eastern Marsh Harrier hunted on the beach below. Siberian Rubythroat were a common sight and were often singing on wires next to the road. 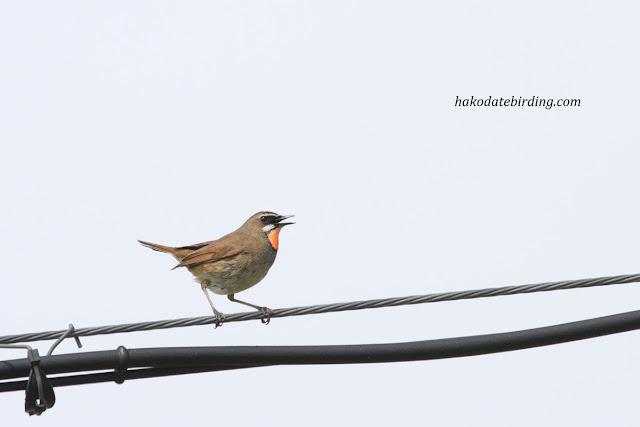 On Sarobetsu there were lots of Yellow Wagtails next to the road but they were very shy and flew away before I could get closer. 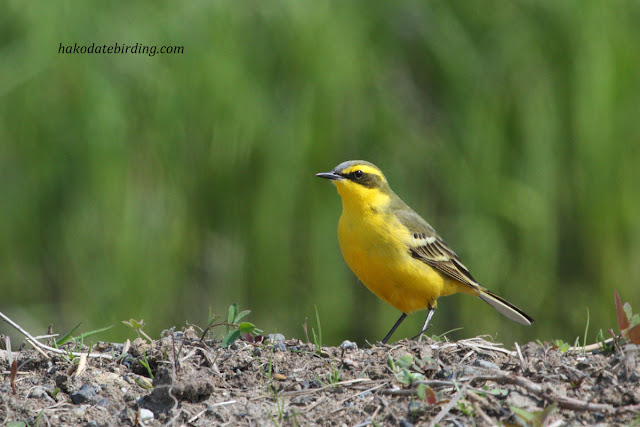 Grey Tailed Tattler were everywhere on the coast. 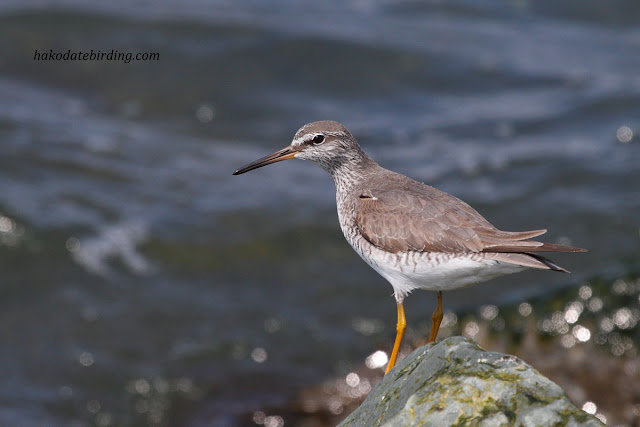 By Japanese standards the area is very remote with hardly anyone living there. 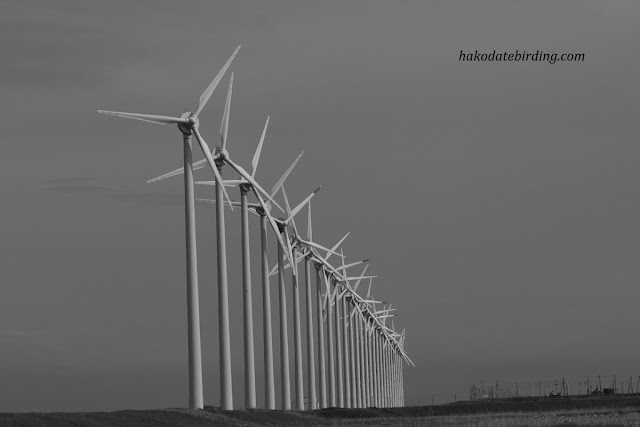 On the third morning we discovered a grassland just near where we were staying. 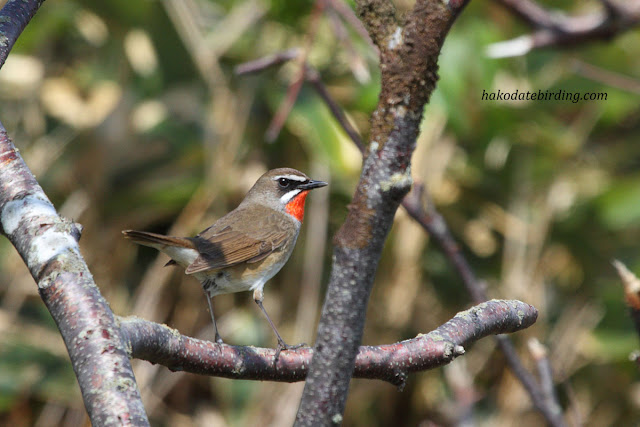 Lots of Rubythroats here but this is a very shy species and I found it difficult to photograph. With a bit more time and local knowledge (and maybe a better longer lens) I'm sure it's possible to get some nice shots but this is a typical view. 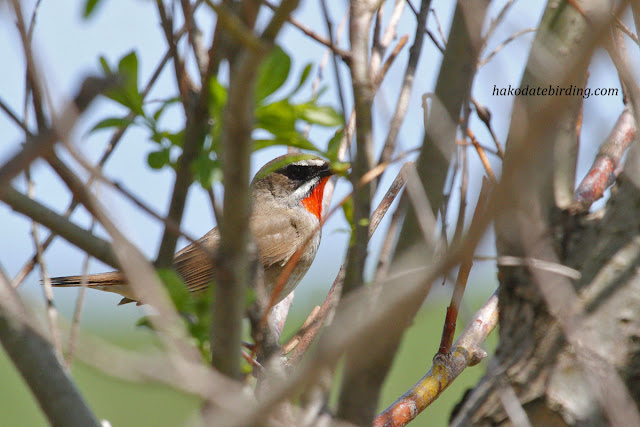 I got my only lifer of the trip here: a Middendorffs Warbler flitting around under the boardwalk. Yellow Wagtail were also present at the same site and it looks like a good place to visit next time I'm in the area.

We also visited the northernmost point of Japan: Soya Misaki. I was expecting a dramatic windswept cape but what we got was just a car park next to the sea.

After north Hokkaido we headed eastwards but the fog set in around Abashiri where we stayed one night. Just before it got foggy I'd seen several White Tailed Eagles sitting on dead trees on the beaches but we didn't stop.............the next day the fog lingered. Here's an eagle in the mist near Tofutsu-ko........ 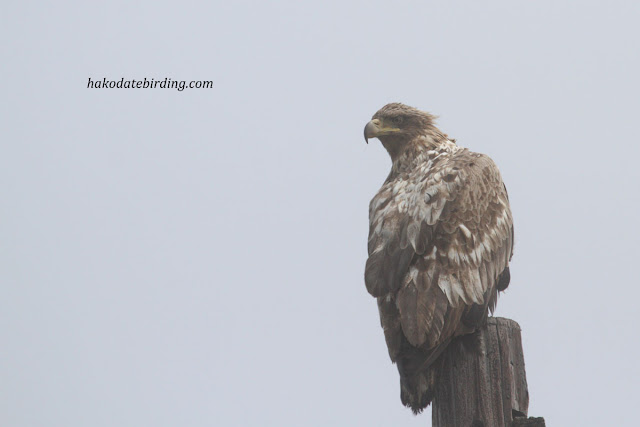 Next stop was Notsuke, we spent a couple of days here. This was the best place birding-wise of the trip.

There were lots of eagles here but they weer rather jumpy, not like I remember from previous visits. Most of them were young birds and some of them looked very raggedy. 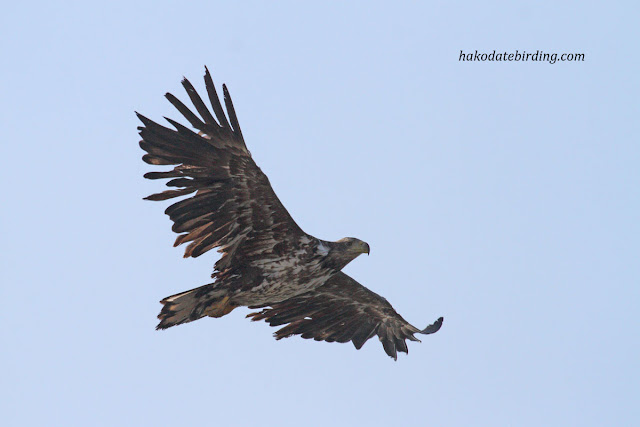 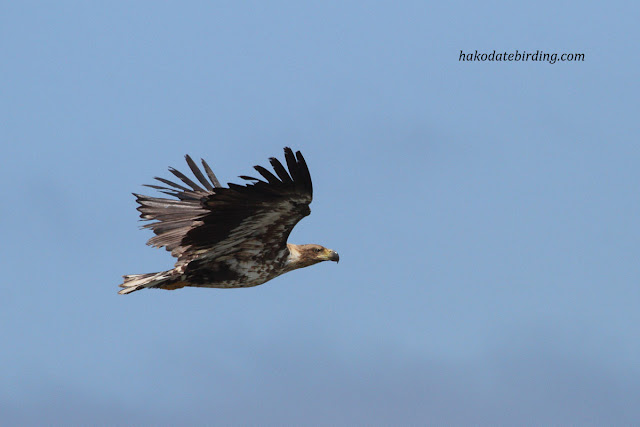 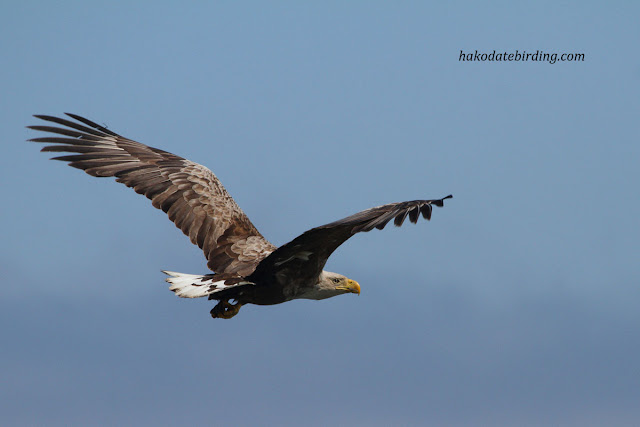 All I could get were BIF shots.

There were various waders around. I couldn't find any Common Redshank (there were loads here on my first visit 6 years ago, where have they all gone?) but I did see Mongolian Plover, Grey Tailed Tattler, Oystercatcher and lots of Ruddy Turnstone. Lathams Snipe were everywhere. 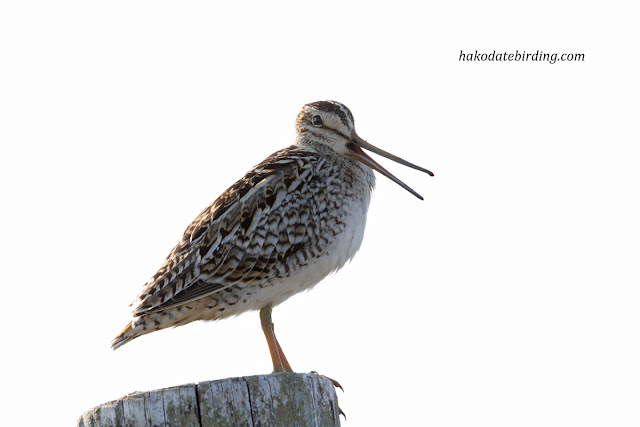 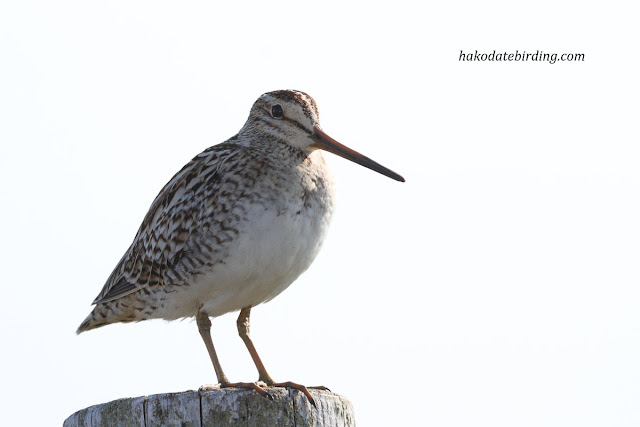 Siberian Rubythroat were common but as elsewhere difficult to approach even from a car. 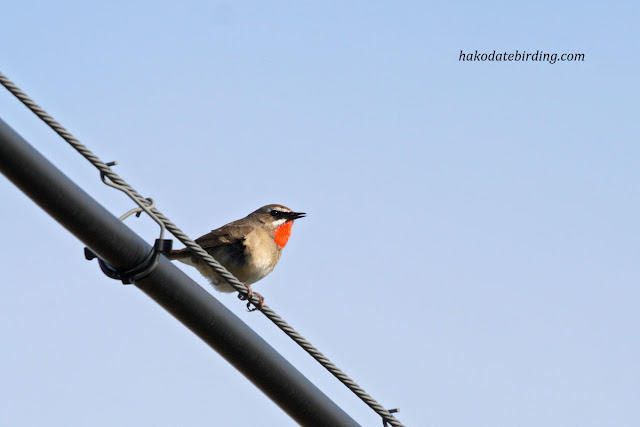 Long Tailed Rosefinch were also common by the roadside. 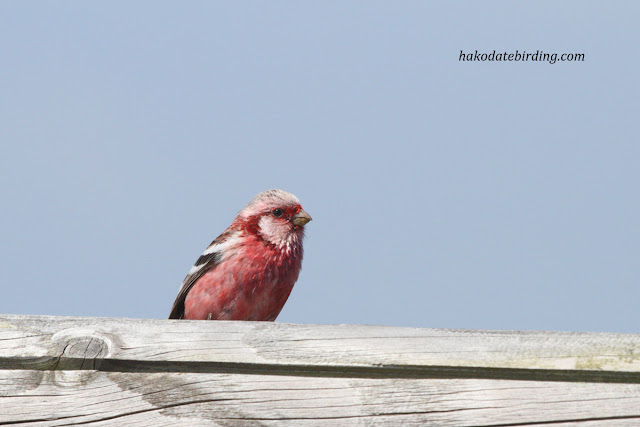 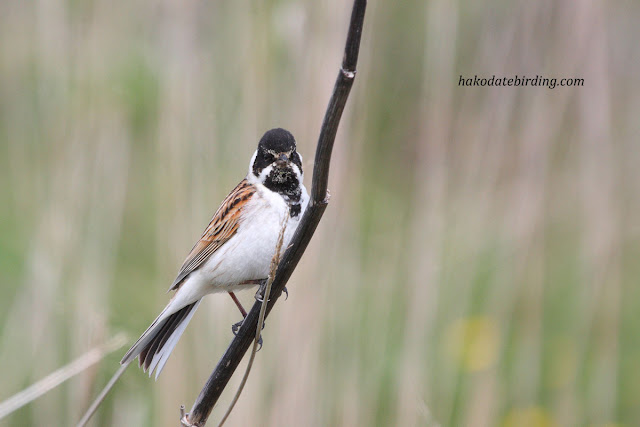 Still plenty of wildfowl around including this distant Falcated Teal. 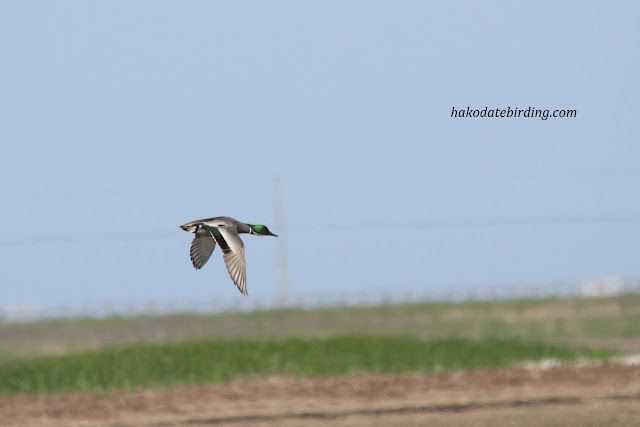 Several pairs of Japanese Crane were displaying far out in the lagoon........... 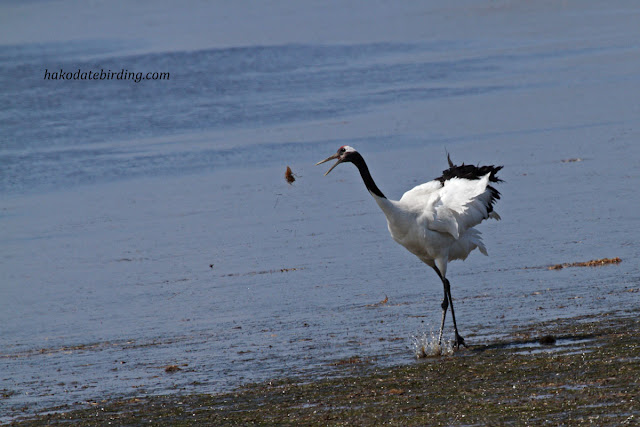 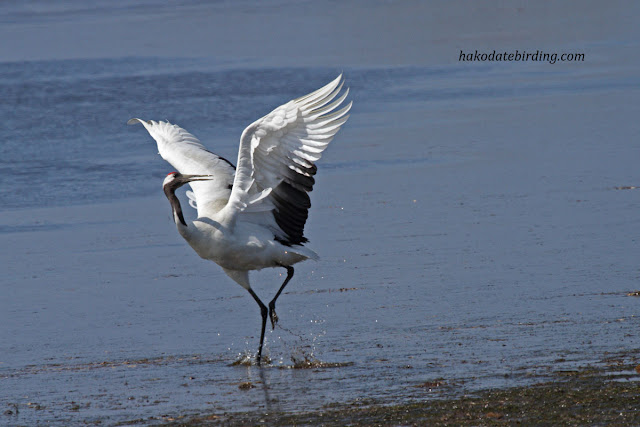 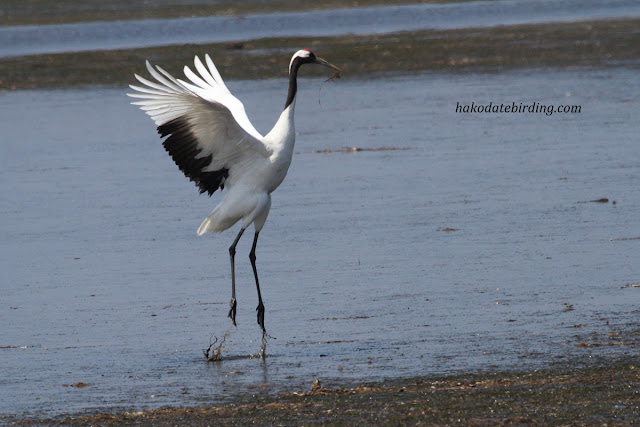 Notsuke is a bit of a bleak place. 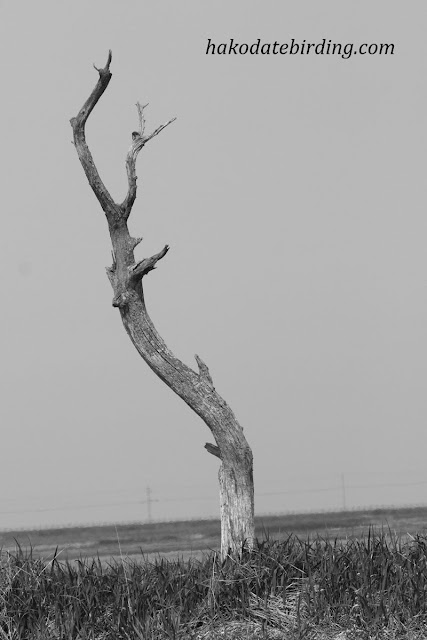 We stopped off at Furen-ko but had to abort a walk into the forest when we saw bear footprints on the boardwalk. A worried looking man came up behind us and went to check to see if the bear was still around. All he had was a pair of binoculars (no gun, not even bear spray). He returned unharmed later. Nossapu was the next stop: the easternmost point of Japan and it was extremely windy. White Tailed Eagle were here. 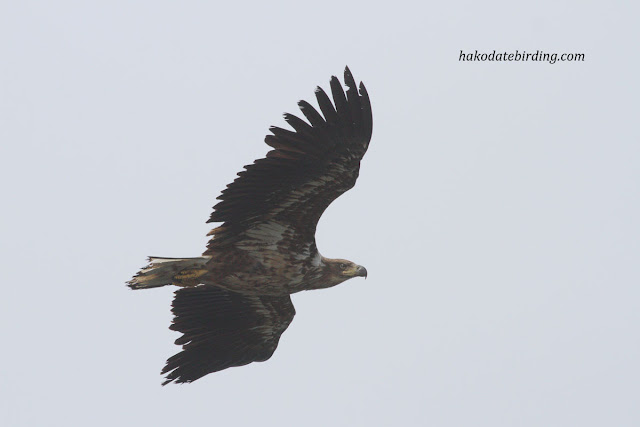 Not much on the sea, it was too windy to check anyway. Black Scoter, a couple of divers, Rhinoceros Auklet and lots of cormorants (no Red Faced that I could find alas). An old shipwreck sits on the cape here, it gets smaller every time we come. 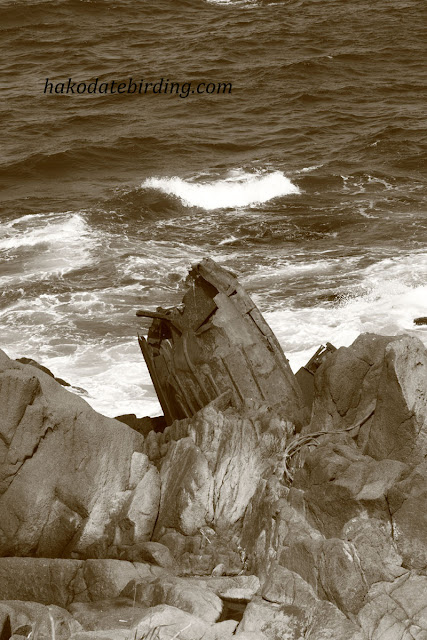 We had planned to stay at Kiratappu the last night but I'd made a mistake and the campsite wasn't open yet. It was even windier here anyway, the tent would have blown away I'm sure. Kushiro was a couple of hours drive away so we sent a night in a cheap business hotel there.

After this the birding dried up as we headed back south. I saw Arctic Warbler near our hotel in Minamifurano and this baby fox was roadside near Biratori........... 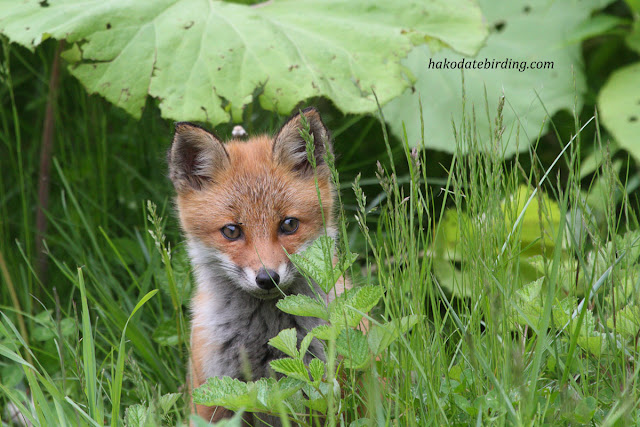 We spent the final night of the trip at Toya, I was surprised to see a Grey Tailed Tattler on the lake shore and at Oshamanbe I heard my first Grays Grasshopper Warbler of the year...........

A bit disappointed with some of the photos, perhaps I was expecting too much on a whistle stop tour like this.