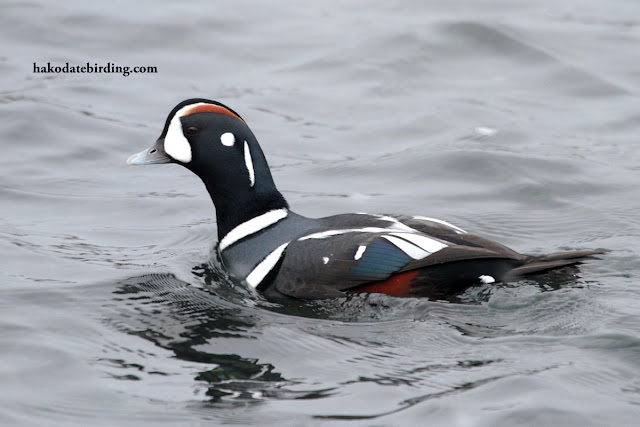 A male Harlequin Duck near Hakodate dock this morning. I went to a nice spot I know to see if the Brent Geese had arrived yet but there was no sign but the Harlequins were not as shy as usual and came much closer than normal. 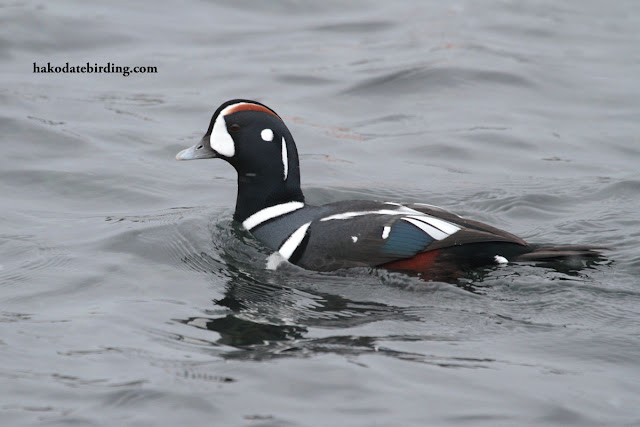 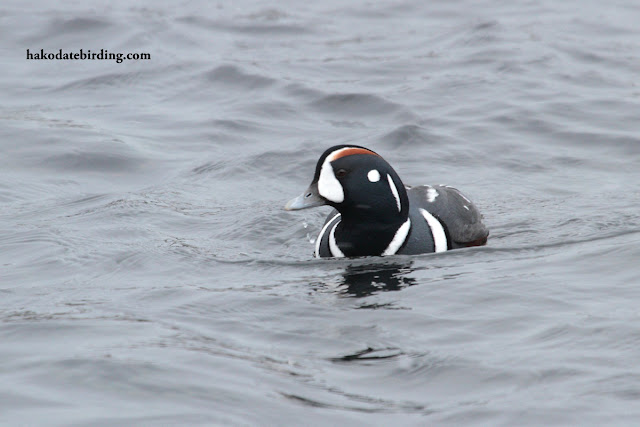 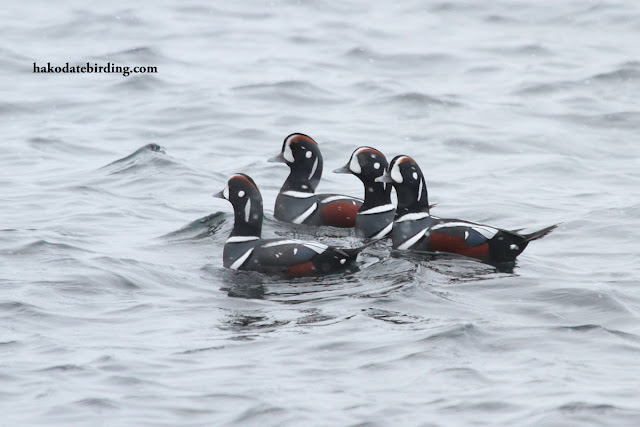 Shame about the weather, it's been awful this last week. Rain earlier on and snow the last 2 or 3 days. One day I'll get a photo of a Harlequin Duck up close and in good light.

They were diving for small crabs, as you can see in this picture. 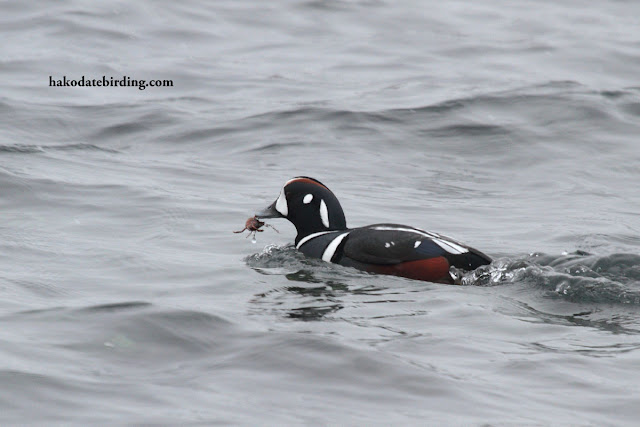 On the way I walked over a long bridge that looked down into the bay and noticed this strange little bird in the distance. 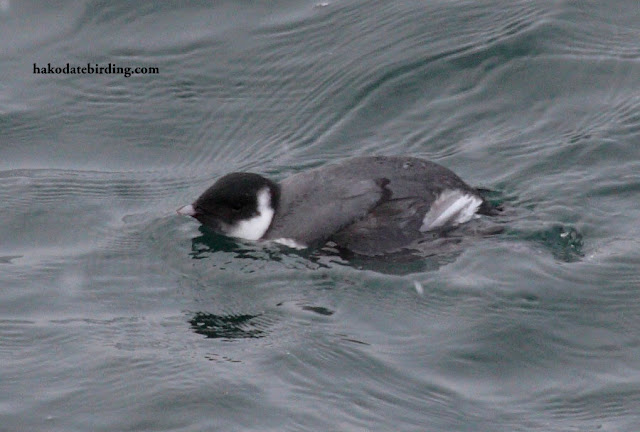 A couple of weeks ago I saw lots and lots of Black Legged Kittiwakes at Yakumo. Whilst I was watching them I spoke to 2 birders from the Hakodate branch of Hokkaido University. Kura and Kim. They said they hoped to see a Red Legged Kittiwake (much rarer) amongst all the Black Leggeds. And see some they did as you will see if you click on the links. They must have been blown in by the big storm last Sunday. The birds in question were in Sawara which is fairly near Hakodate (I often go there). From their blogs I note the Rooks/Daurian Jackdaws have returned too.........and in the local paper I noticed  a Japanese Wood Pigeon flew into someone's window in Shikabe.

Not much else around Hakodate for my good self today though. A few Wigeon, Pelagic Cormorant, lots of Dusky Thrush. earlier on in the week saw the usual birds in Goryokaku Park and the local river. Here are some more BIF shots that show the 7D can do it in crappy dull grey snowy weather too........... 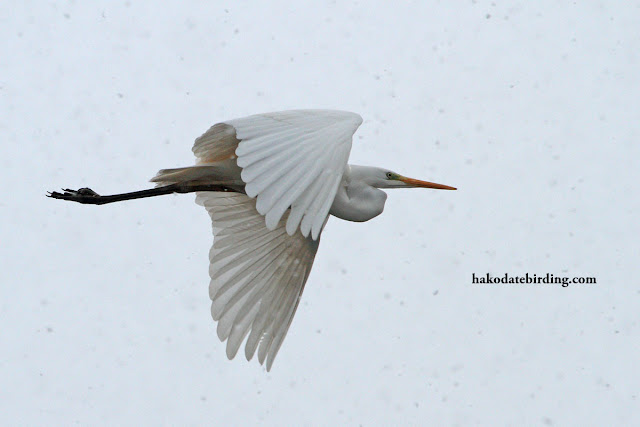 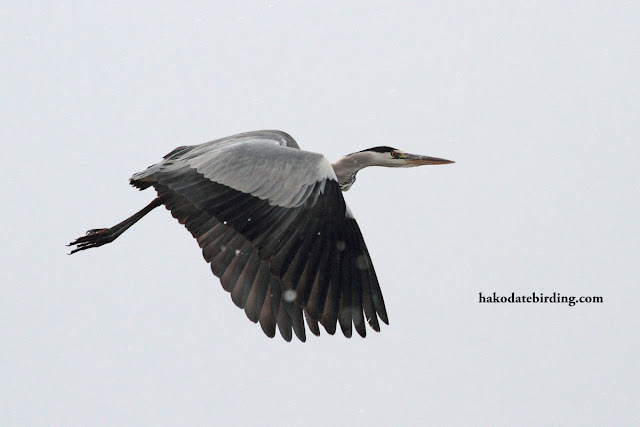 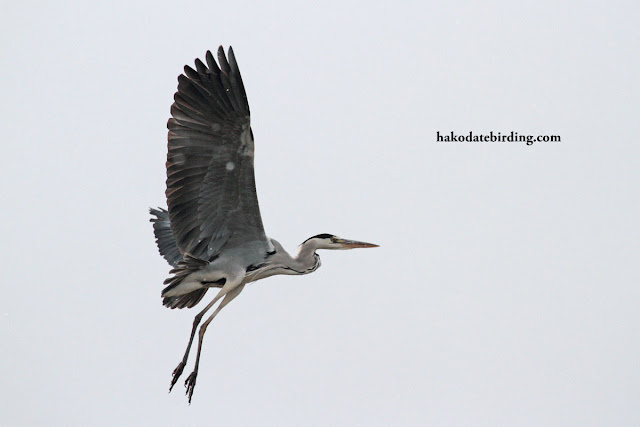 Thierry Henri, what a cheating tosser. I didn't watch the game but I've seen the incident on youtube many times now.

I think of 2 times England suffered from extremely  bad refereeing/cheating in my time following football since the late 70's. Maradonna's hand of god of course but also that game in Holland in 1993. The 'do I not like that' game when Koeman scored after he should have been sent off for a penalty that wasn't even given either. It meant we didn't go the 1994 World Cup Finals in the USA which still rankles. Still, we won our only World Cup thanks to a dodgy linesman so I'll shut up there. Glad I'm not an Irish fan though.

Off to Yakumo for a couple of days at the weekend, hope the eagles have arrived and they skowly flap around just like those Great Egrets and Grey Herons.