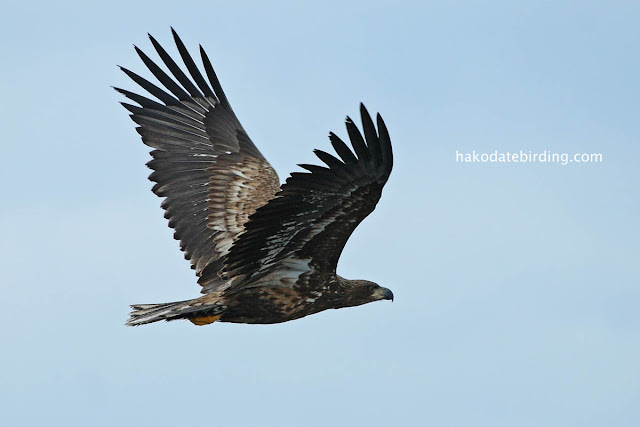 A young White Tailed Eagle at Yakumo last Wednesday. I and a friend (thanks for the driving Dan) went up to Oshamanbe and Yakumo, possibly my last time up there this winter. We looked in vain again for the Snow Buntings but failed. We did howver get a very brief glimpse of a much rarer bird, a Siberian Accentor. It was skulking in some bushes and disappeared before we could relocate it. From endless hours looking through fieldguides I thought it looked like the Accentor but wasn't 100% sure. My companion for the day (not familiar with the species at all but he had gotten a better view) pointed at it in the fieldguide totally unprompted.

No Snow Buntings but a few Redpoll and Asian Rosy Finch. And the Eagles of course. Less than last week, only 4 adult Stellers this time. I videoscoped this one for a while but couldn't catch it doing anything interesting until it flew off.

The sound of the shutters clicking was me taking a series of flight shots of the same bird including this picture. 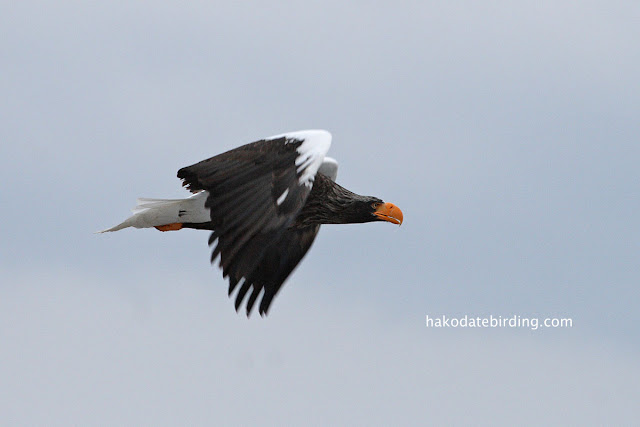 The usual stuff was around at Yakumo including Lapwing, Long Billed Plover, Smew and the Bean Geese. 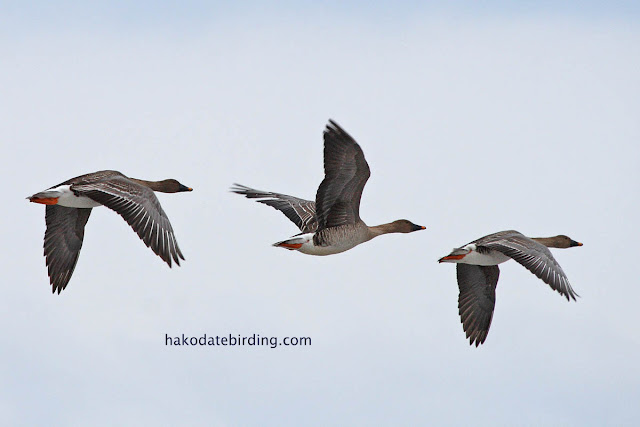 Up at Oshamanbe the Long Tailed Ducks were still present. 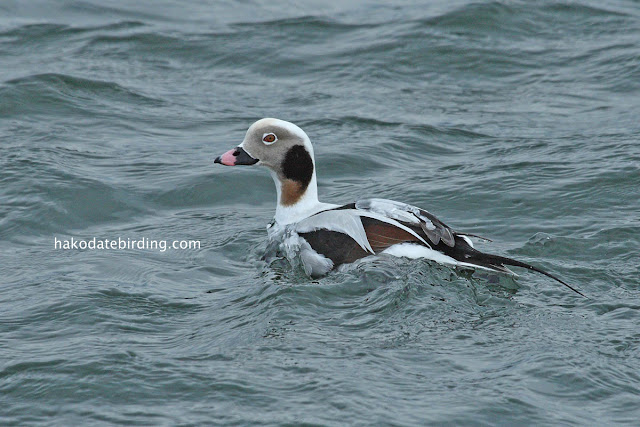 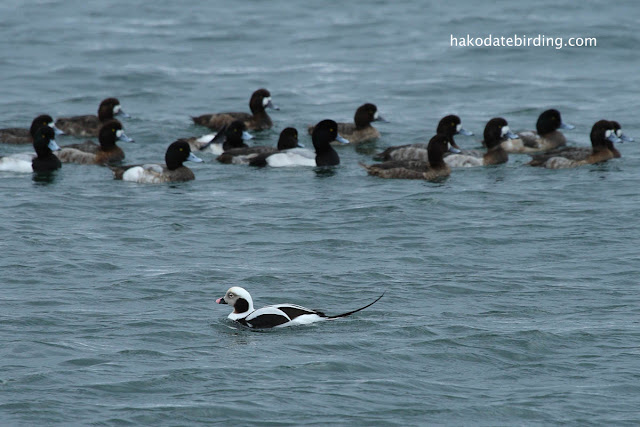 And they were joined by this Black Throated Diver. 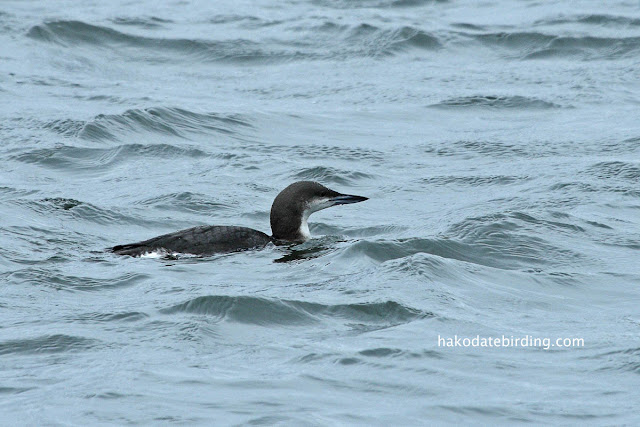 The weather has again been very mild this week but the harbour at Oshamanbe was bitterly cold. On the way back to Hakodate we stopped in Mori to take some shots of some Bohemian Waxwing in the fading light. 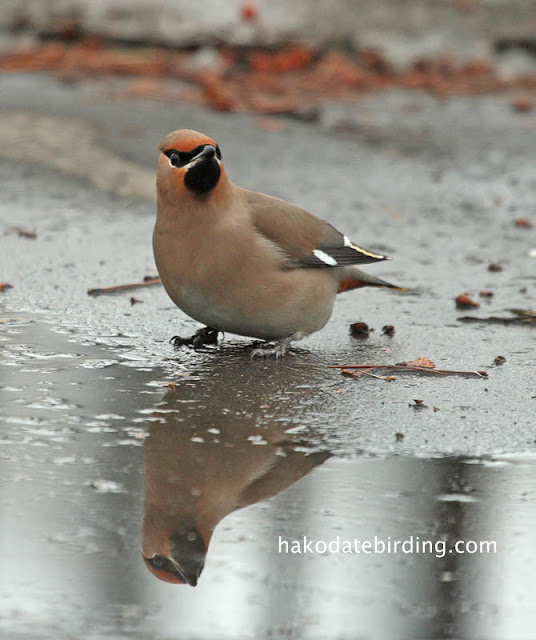 We finished off in Onuma. The Ural Owl was in its' usual hole but it was too dark for any photos. We were provided with a great comedy moment though. There were 3 or 4 photographers there. One had a huge 5 or 600mm F4 lens trained on the Owl. He looked over at us as if to say "shhhhhhh.........be careful not to scare it away". Unfortunately he didn't notice his camera case behind him as he stepped back and fell with a yelp and a clatter. The Owl flew off of course.

Not much in Hakodate this past 7 days. A White Tailed Eagle was at Ono on Monday as well as Red Necked and Great Crested Grebes offshore at Kamiso, Yellow Throated Bunting were in the bushes near the river on Friday, groups of Brambling have been popping up all over town and there have been a few Bullfinch about including this female taking a bath. 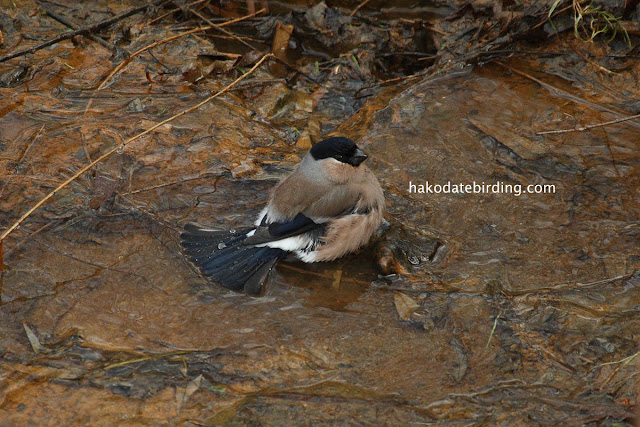 Today (Sunday) I walked along the beach to Yunokawa. Long Tailed Rosefinch, Long Billed Plover and this Asian Rosy Finch were the main birds of interest. 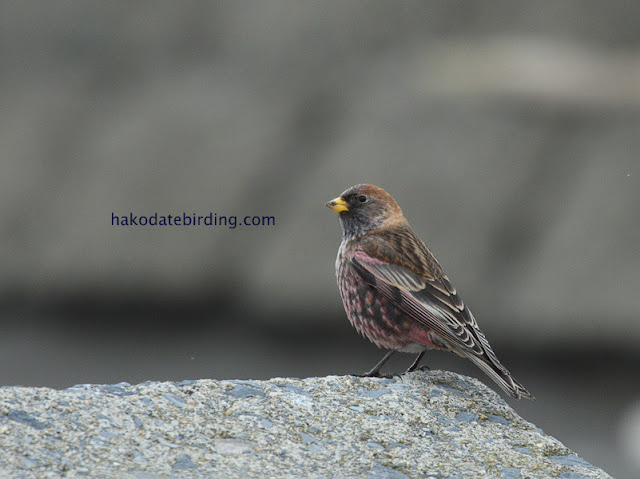 And this Temincks Cormorant posed nicely. 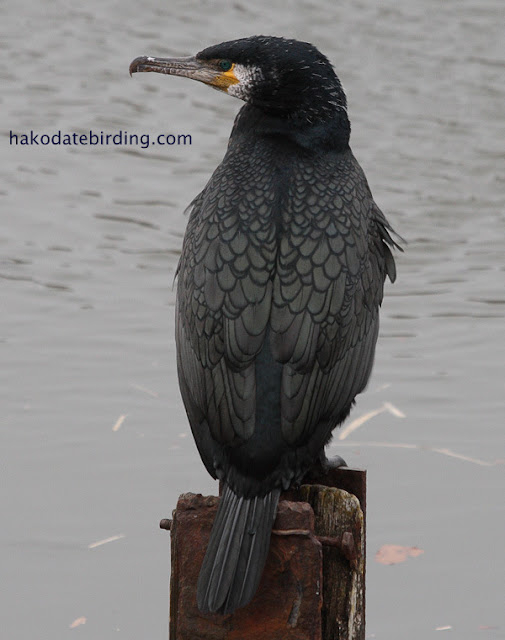 And a special thanks to Mariko for cooking this tasty treat for me and my wife, a type of food I rarely get to eat in Japan. My wife is in the background.... 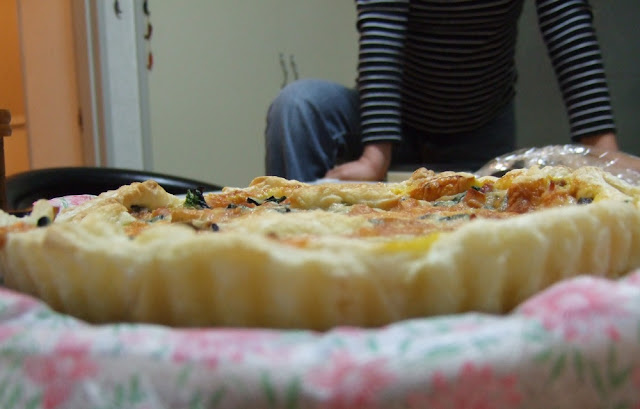 So a bit of a quiet week (although the Siberian Accentor was a pretty good find). I didn't see the England v Spain game. Can't understand why the media are so critical of England. I mean they were playing the #1 ranked team in the world away from home, several very key players were absent and it was only a friendly. They lost. So what?

I got drunk on whisky and coke last night and felt like s*it all day today. Not much sport on TV, I'm not so interested in the rugby and the FA cup games on TV weren't so interesting either (West Ham v Middlesborough?). As I've said before business has been very slack this winter but Saturdays are still very busy so it's a good excuse to get drunk.

I've had to do a couple of things on Microsoft Office this last week. I'm not familiar with this kind of software and even doing simple stuff proved a time consuming and frustrating endeavour. I haven't worked in an office environment for over 10 years and have hardly ever used Word or Excel. I now feel old and stupid anyway.......

Another quiet week in prospect. The weather isn't looking too good so I'll get back to my war of wills with Microsoft Office then. Does swearing loudly at the computer screen facilitate learning I wonder?

In 13 days we'll be heading off to east Hokkaido, I can't wait. I've been to the area 3 times before in Spring and Autumn 2006 and Spring 2007. It was pretty cold even in May and October so the end of February will be absolutely freezing. Which is good of course. It need to be cold for all those hundreds of eagles on ice photos I'm going to take.....