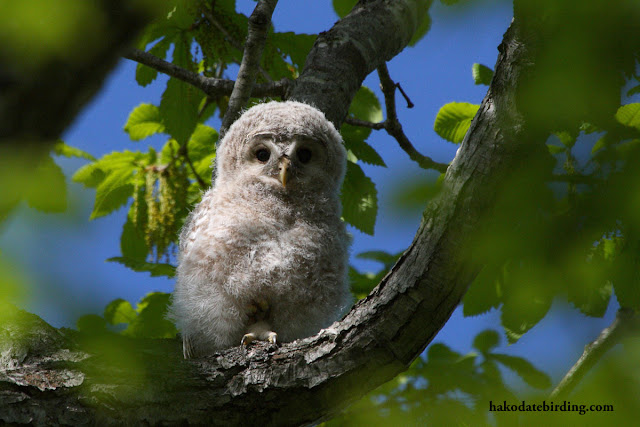 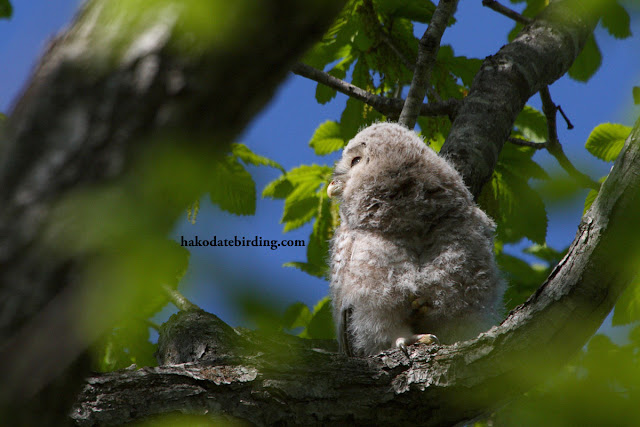 One of 4 baby Ural Owls this afternoon at Onuma. You have to admit it's pretty cute........

This picture is not so cute unless you think bloodied decapitated mice are cute. 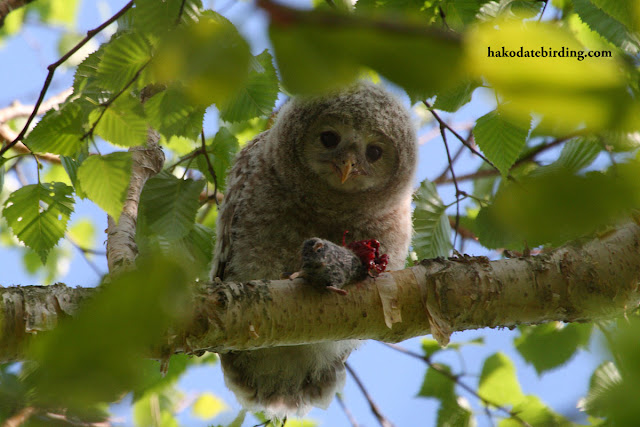 These Owl shots were taken with my new toy attached to the camera, a Kenko 1.4 Teleconverter. I have to tape the pins to ensure autofocus but it worked most of the time.

I had sore arms and a sore neck after an hour staring up into the trees. The forest at Onuma was fairly overgrown and there were lots of bugs but thank god there weren't any mosquitoes. There were lots of Narcissus Flycatcher, Several Short Tailed Bush Warbler and Black Woodpecker but the Owls got our undivided attention.

The weather has been awful whenever I've had any free time this last week but this afternoon the sun came out. There were several species of wader around at Kamiso and Ono. These Eastern Curlew were at Kamiso and were a local first. 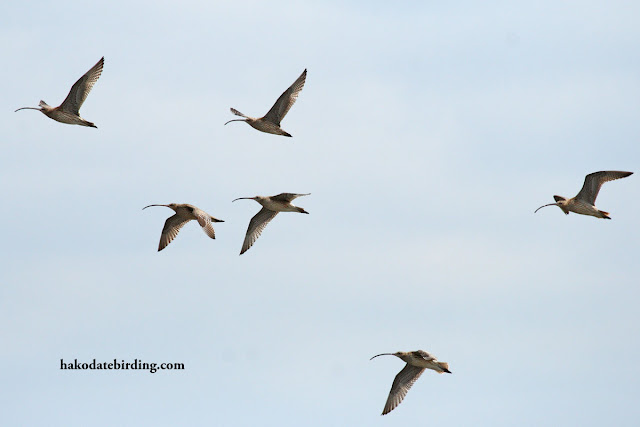 In the ricefields at Ono I saw a big flock of waders in the distance but couldn't locate them afterward. We did find several Wood Sandpiper but none close enough for a photo. The first Cuckoos of the summer were singing, Oriental Reed Warblers and Chestnut Eared Buntings were everywhere, a couple of Black Browed Reed Warblers were skulking in the long grass but not singing yet and my wife saw an 'odd looking' bird that I think may have been a Ruddy Crake....... a bird I've yet to see myself.

Stars of the ricefields were the Siberian Stonechats. 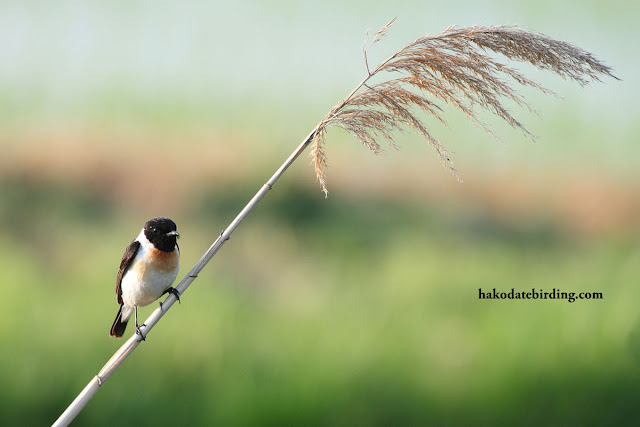 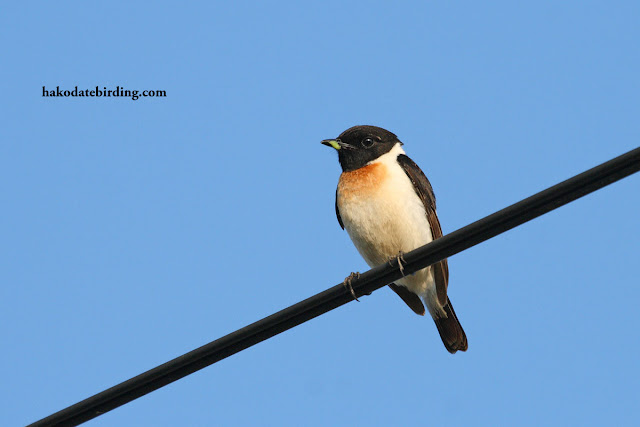 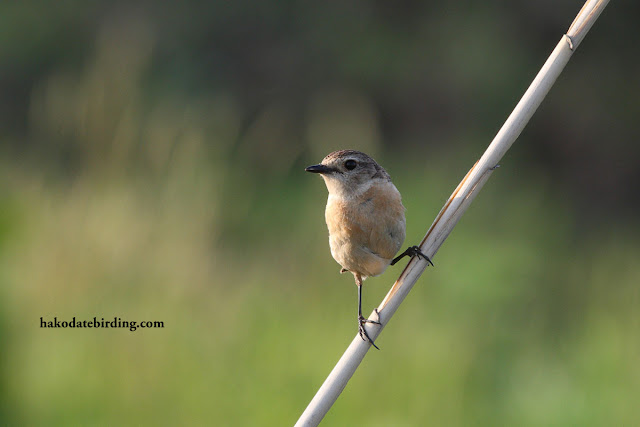 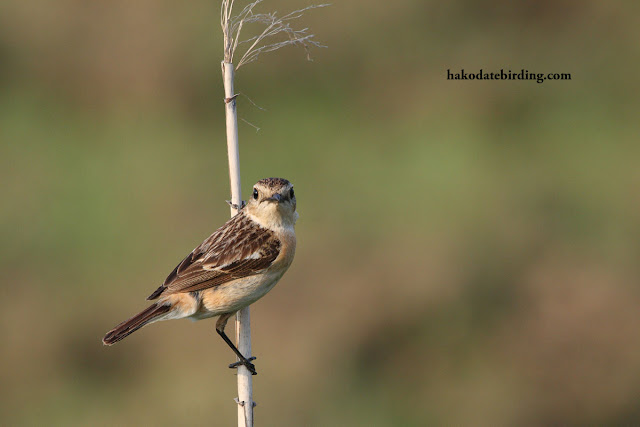 And here's the sun setting over the ricefields....... 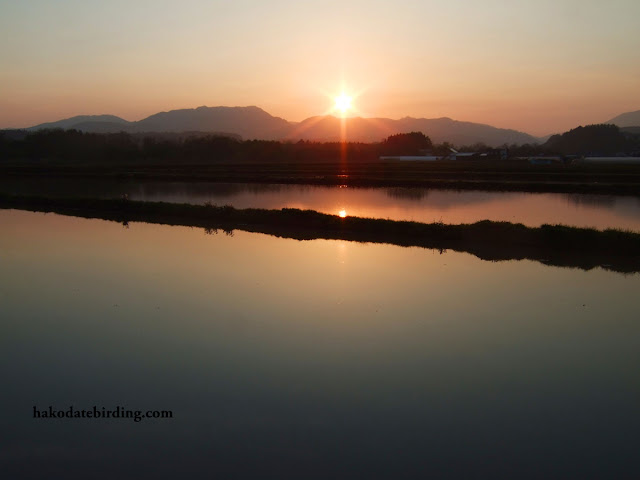 More Owl and Stonechat pics will appear on my other blog in a day or two when I sort through them......

So the footy season is drawing to an end. I'll be watching the relegation battle in about an hour or so and I'm so glad I'm not from the northeast. The Champions League, FA Cup and England's trip to the middle of Asia will keep me occupied for the next couple of weeks but then it'll be whatever Ashes action I can find on sopcast or TVU, or BBC's TMS at least I suppose. Can't believe it's 4 years since the last one.

Not much happening in this neck of the woods. The noise coming from lots of minor construction projects in my neighbourhood are keeping me as grumpy as ever. I'm enjoying the first season of the TV show 'Sons of Anarchy', reading some books on human evolution, working a lot............and cursing rainy weather that coincides with my days off. Sunday is the only day we can go out in the car these days so we are at the mercy of the elements. Hopefully next Sunday will be nice and sunny unless God decides to punish me for my past sins and sends more rain.