A week of Waxwings 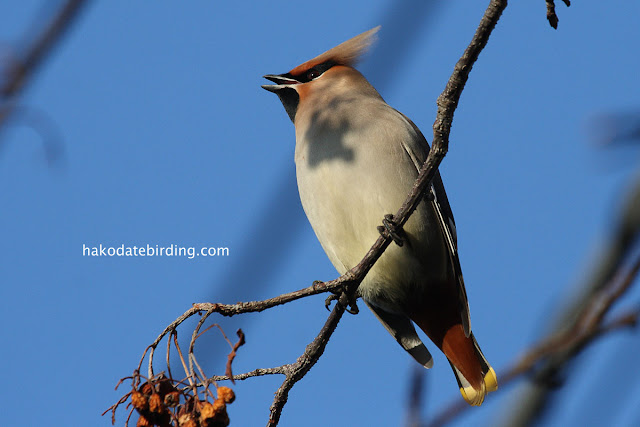 Bohemian Waxwings were present in several small flocks in Hakodate this last week. The flock I spent most time with were located in front of Hakodate Police HQ on a very very busy main street. Much to-ing and fro-ing across the street from both me and the waxwings ensued. 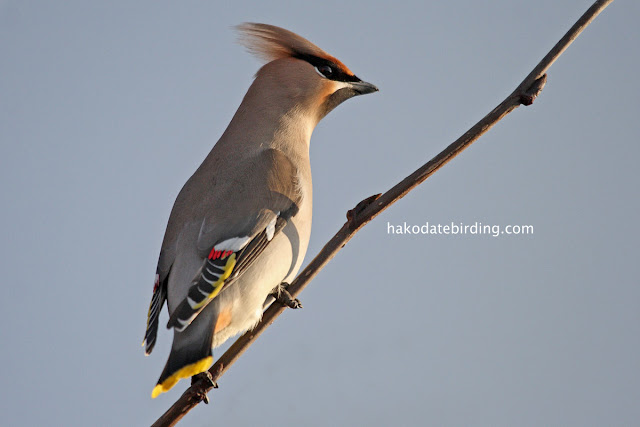 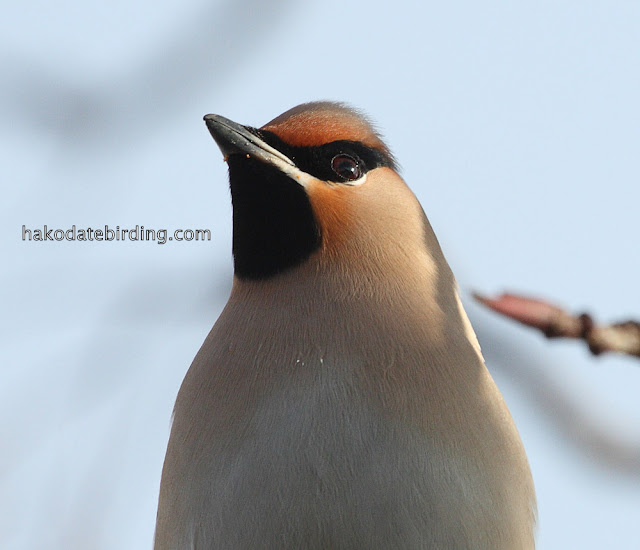 A lot of the shots were ruined because of my inability to remember to change camera settings when the birds swooped down. Lots of blurred shots due to slow shutter speeds.

It was a bit hairy dodging the traffic (one of the waxwings actually got hit by a car) and lots of the locals were staring at both me and the birds (especially as it was a busy intersection of the road). Still, just about worth it. 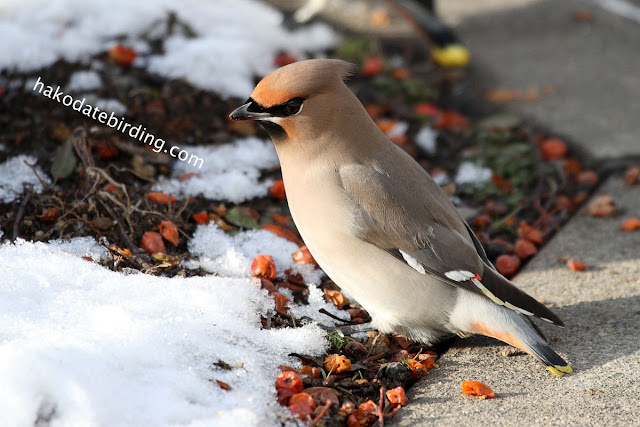 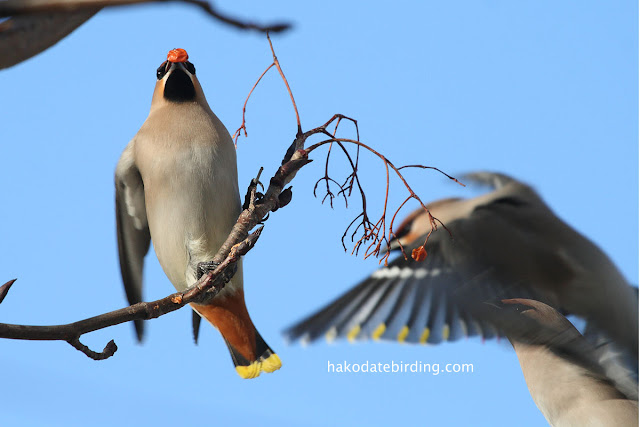 A couple of days later the same flock (presumably) had relocated just around the corner to a mercifully quiet side street. 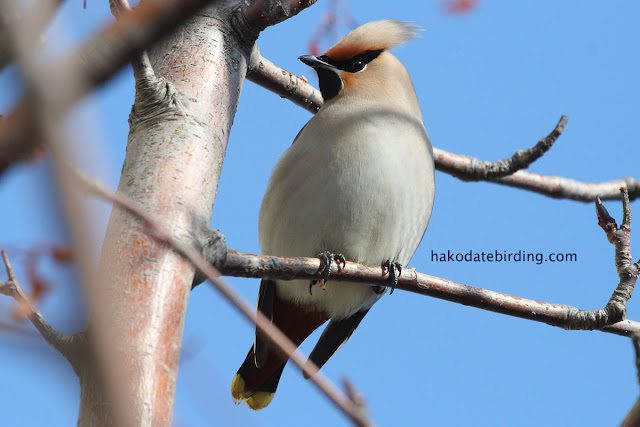 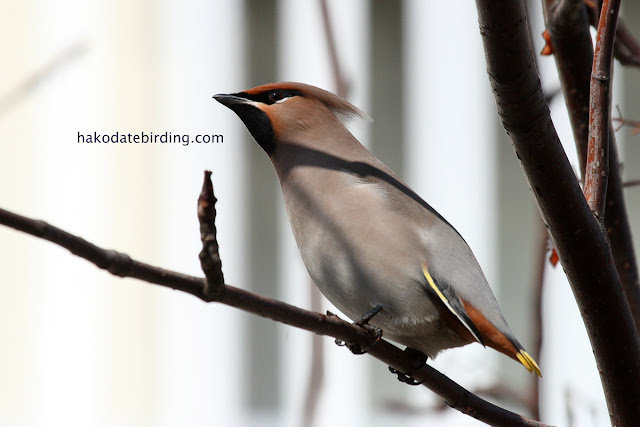 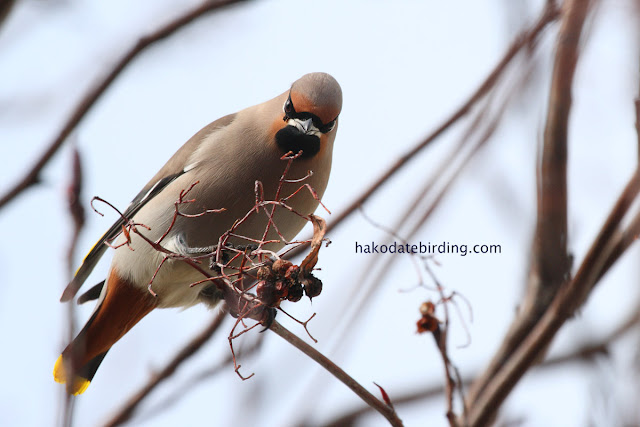 I had a bit more luck with pics of them on the ground..... 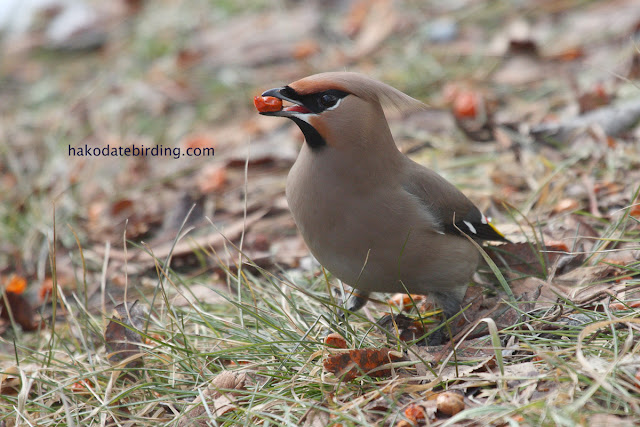 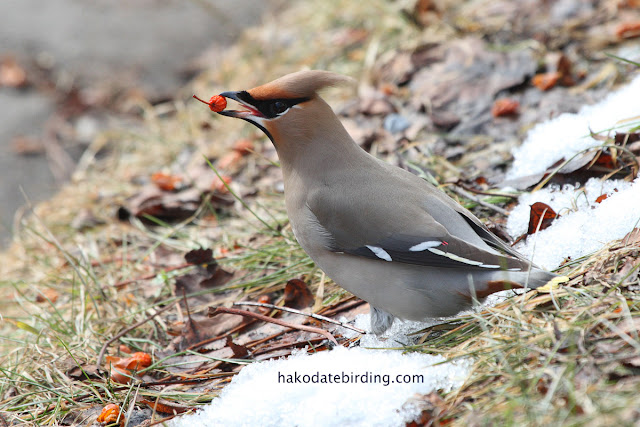 These were much easier to photograph than Wednesday's bunch but they only hung around for a few minutes before they flew off trilling merrily away.

It's been quite a good week in Hakodate bird-wise. Common Crossbills have arrived (2 small flocks) but they stayed in the treetops and I couldn't get any decent shots. Other stuff round and about included Rustic and Yellow Throated Bunting, Common Kingfisher, Coal and Varied Tits, Brambling, Brown Dipper, Long Tailed Rosefinch, Smew and Red Throated Diver. A group of 5 Bullfinch was in the park near my flat, they stayed up high mostly, these are the best shots I could manage. As you can see this subspecies is slightly different to the one in the UK. 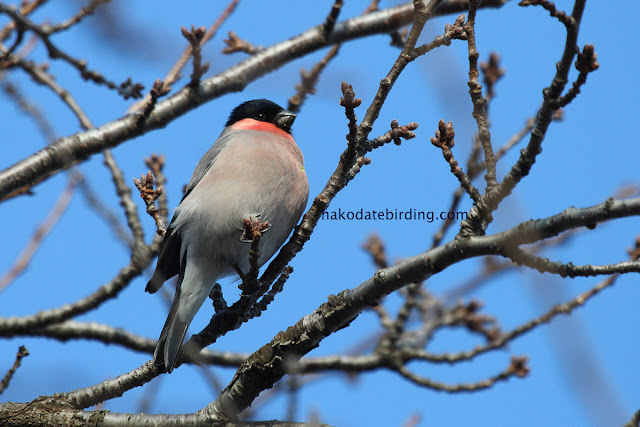 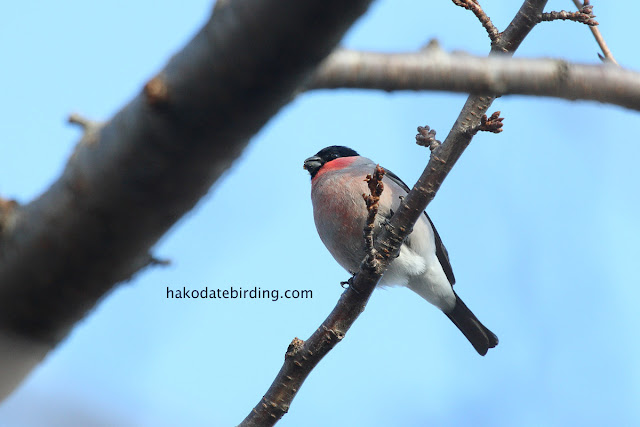 We popped over to Onuma on Monday, the Ural Owl was still present, as were the tame Tits and Nuthatches. 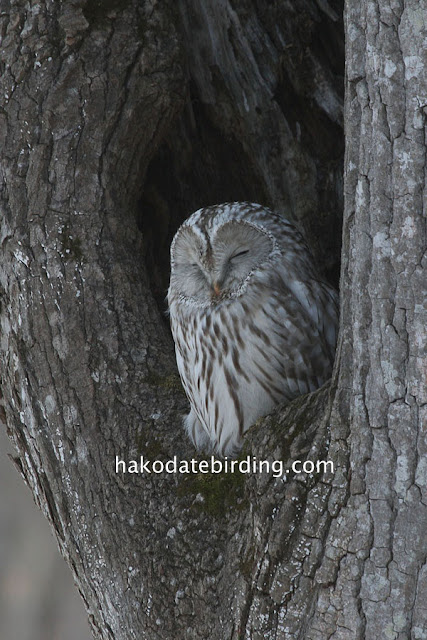 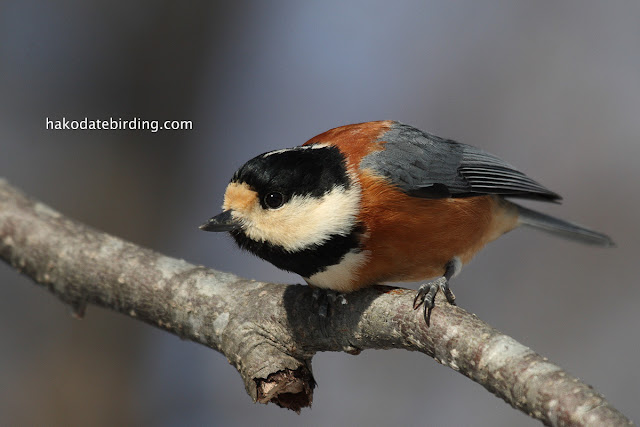 Goshawk and White Tailed Eagle were the other noteworthy species. For more Onuma shots on Monday please go here.

To finish off the week were were in Onuma again. My wife has located another Owl in a different hole. I got some pretty poor shots. Pretty poor for 2 reasons. Firstly my settings were all wrong when the Owl left the hole and perched obligingly in good light. And secondly for some reason the Image Stabilization on my big heavy lens was switched off. Why? When? I think it was the above Owl shot (which was on a tripod hence the IS was off). 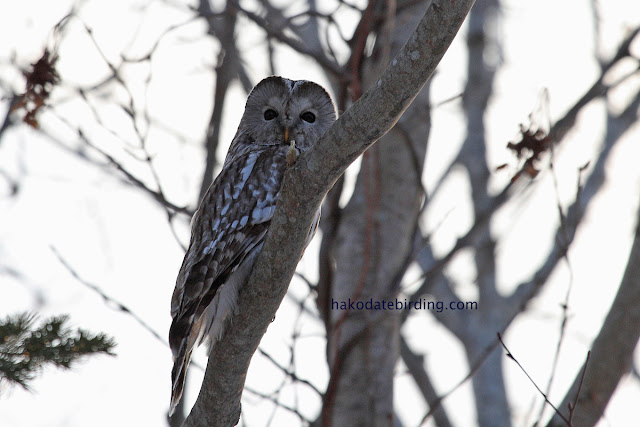 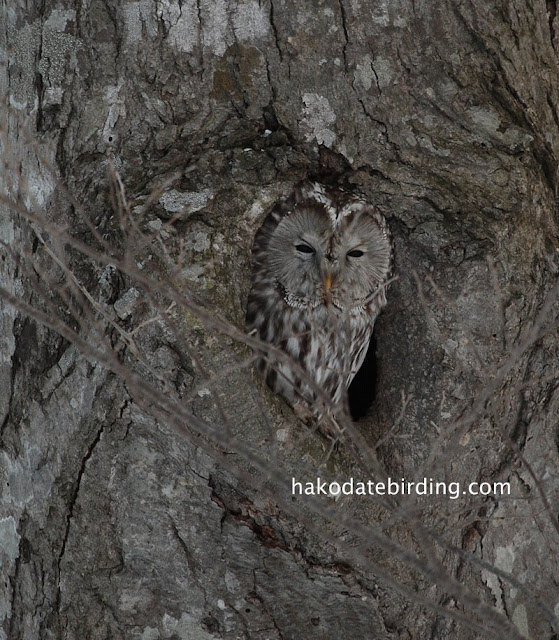 So all week the IS must have been off. All those Waxwing shots were without IS. With IS on the 100-400L I find I can get sharp shots at 1/250 sec, so if a bird isn't moving much this is the minimum I aim for. Without IS it's useless, or so I thought. Anyway what a f**k up. For more Owl images from today please go here.

The Black Necked Grebes were still in the harbour at Shikabe but not as close as last time plus it was a bit rough and windy. Plus some moron was using a big heavy lens with the IS switched off. 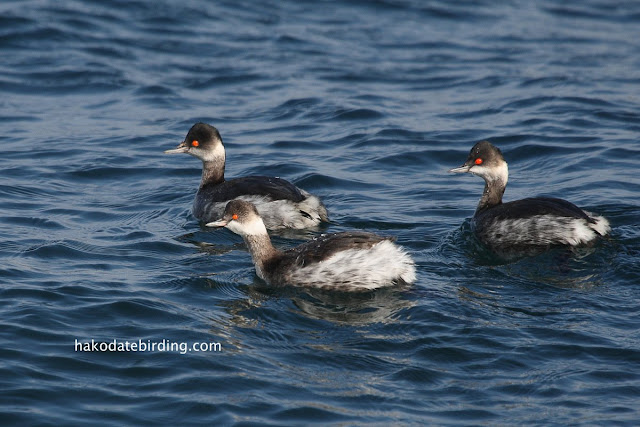 And to finish off a couple of winter scenes snapped with my compact,I was too lazy to change lens today. This waterfall in Shikabe is normally completely frozen in winter, not so this year..... 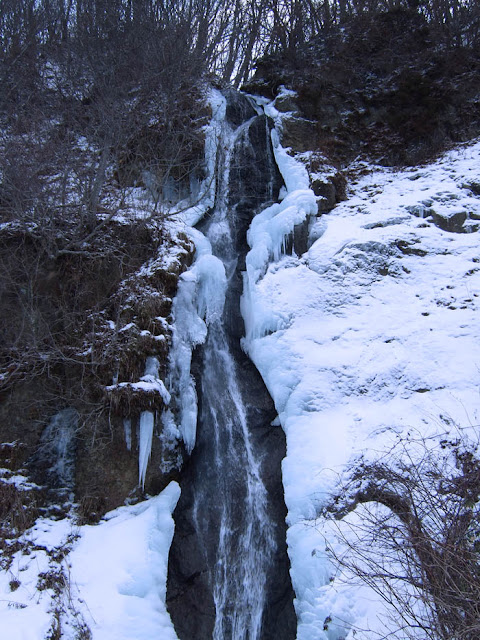 And the campsite at Onuma, the mountain was covered in cloud.....so here's the lake. 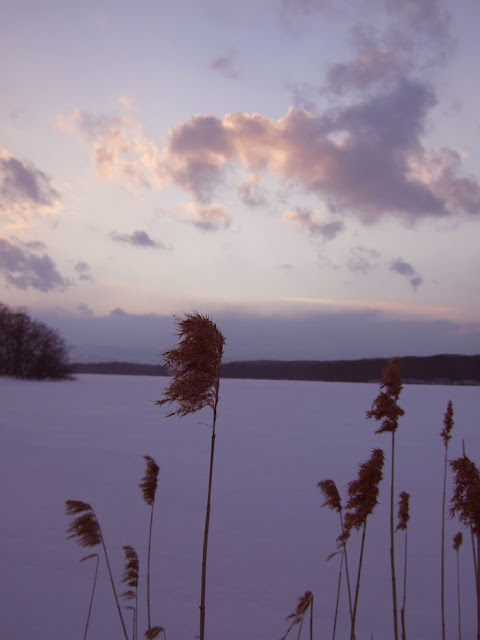 I see on another blog the Snow Buntings are still at Yakumo. I may only get one final chance to see them this winter, so after 2 failures I'm hoping it'll be third time lucky. More tramping around freezing cold windy exposed beaches then.......

So Robbie Keane has gone and Gerard is injured and out for 3 or more weeks. Liverpool's title challenge now relies on the fragile Torres staying fit and some of the mediocre foreign mercenary journeymen chipping in with a few goals, er like they did against Portsmouth last night (I didn't stay up to watch but it sounded pretty dramatic).

I went to bed just as England started their second innings last night, just 70 or so runs behind. I thought they'd probably win what with the Windies batting last. When I woke up this morning to discover they'd lost by an innings I actually laughed.

Still pretty mild in south Hokkaido. Cold of course but much less than in most winters and not much snow on the ground in Hakodate at least though I realise England has been copping a lot of snow the last week. In Hokkaido the snow generally starts in late November/early December and basically remains until late March, the snow becoming more hard and compacted as the weeks go by but this year is different. Actually the winters seem to be growing milder even in the 10 or so years I've been here. The last really harsh winter was in 2005/6. I hope the cold eventually comes as we're off to east Hokkaido at the start of March to hopefully see eagles atop the drifting sea ice. if the mild weather continues there may be no sea ice at all..........

This weeks episode of 'Shameless' was pretty funny. Whilst I realise 95% of TV in the UK is awful I do miss the other 5%. Thank the lord for torrent sites then........

Another crap month businesswise, what sins did I commit in a past life I wonder? If my wife didn't work in temporary jobs we'd be destitute. Maybe some good luck will come this month..........fingers crossed. I have a couple of plans to perhaps drum up a little business and maybe with all this free time I should do productive things like study Japanese instead of taking poor shots of Owls and harassing Waxwings.

At least Liverpool are top as I type this. And next time I go out with the camera the IS will be switched ON.

Dinnertime now. Kimchi Nabe. And then a bath and a couple of beers before football on TV and then bed. Same as every other Sunday but I'm set in my ways like that.